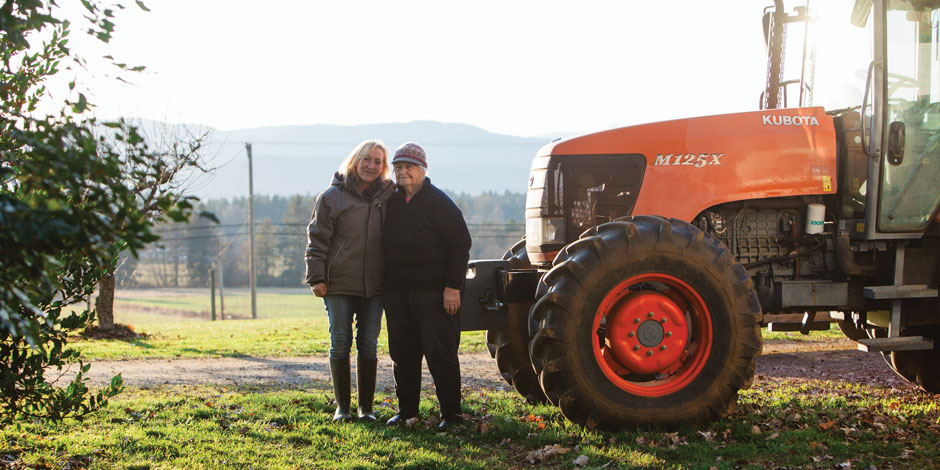 Think you’ve lived in the Comox Valley a long time? These women run a farm that’s been in the family since John A. Macdonald was prime minister.

The first thing you need to know about Glen Alwin Farm is that nobody involved is named Glen. Or Alwin. The people who run the show are Joanna (Jo) Smith and her daughter, Helen Nixon—the third and fourth generations of the Smith family.

With the same bright, blue-eyed gaze and can-do, no-guff attitude, Jo and Helen make a powerhouse pair. They have an impressive amount of knowledge about how to care for their animals and land, knowledge that’s been learned through decades of hands-on experience.

You’ve almost certainly driven past their 190-acre property, which is just outside of Courtenay on the Island Highway. Nearby Smith Road—the one you turn onto to get to Gunter Bros.—was actually named for the family.

British Columbia had been a province for only 13 years when William and Anne Smith, along with their ten children, pre-empted the farm in 1884. (Pre-emption was the process where settlers could acquire parcels of Crown land as long as they lived on the land and made specific improvements to it within a certain period of time.)

The Smiths started clearing the land and raising beef, pork, and chicken, which William would take by oxcart to sell to the mines and stores in Cumberland. The yoke he used to attach oxen to the cart is now in the Cumberland Museum.

William died in 1893, and the farm was split up among his children. His son Jim inherited 40 acres along Portuguese Creek. This is the only part of the original farm that still belongs to the family, though Jim purchased adjacent land to bring it up to its current size.

When Jo married Jim’s son, Tom, in 1961, she brought her own Ayrshire cows into the marriage; she and Tom continued to build their dairy herd for many years, but in 1989 they sold their milk quota to pursue new challenges.

Before that, though, they built the current farmhouse in the 1960s using lumber they cut from the farm, and they raised four kids here, who grew up “picking rocks and sticks” and putting in their share of farm work.

As with any farm, at Glen Alwin “there’s never a time when there’s nothing to be done,” says Helen, but she and her mom generously spend time with me, telling stories about their lives on the farm. They mention working atop silos, driving tractors, rescuing escaped cattle from the highway, getting kicked by cows in labour (not an experience Jo is eager to repeat), taking cross-Canada road trips with livestock, and more.

I quickly get the sense that there isn’t much these women couldn’t do if they put their minds to it.

Touring the farm on a sunny day with Helen is a real treat. We greet the sheep in the back field, usher errant poultry back into their enclosures, say hi to some cows, and watch the pigs cavorting (there’s no other word for it) in the field in front of the house.

At any given time, there are up to 70 or so beef cattle of varying ages on the farm, along with about 70 ewes, several pigs, and lots of turkeys and chickens. (Second-generation Jim raised turkeys, and they’ve just recently started raising poultry again.) Except for ewes during the few weeks while they’re lambing, all Glen Alwin’s animals have year-round access to pasture. There’s even a culvert under the highway so the cows can cross safely to the lower pasture.

Though Tom passed away in 1996 and Jo and Helen now handle most of the daily operations, other family members are still very involved: you can find some of them with Jo at the Comox Valley Farmers Market on Saturdays, selling Glen Alwin’s pasture-raised beef, lamb, chicken, and pork, which are always in high demand.

After spending a morning here, my hope is that future Smith descendants will still be caring for the land and animals, and that Glen Alwin Farm five generations from now remains a lush, thriving corner of this Valley.