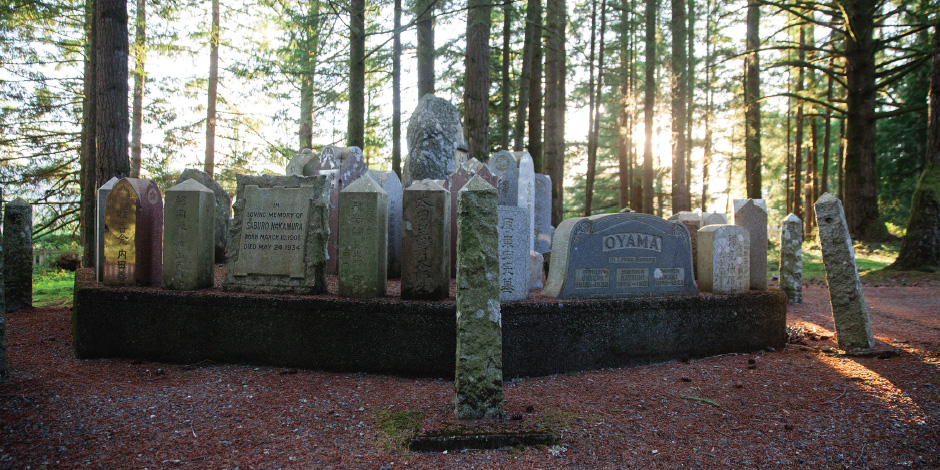 As a tour guide for the Cumberland Museum, I am drawn to stories of people within our local history—I read family memoirs, listen to interviews stored in the museum archives, and visit local cemeteries. Within a cemetery, the stones tell the story. I can discover events, moments, and the history of an area, and I can learn about individual lives from what is inscribed. The Nikkei No Haka cemetery, located just outside of Cumberland, does not offer the usual clues to lives lived. The stones, on first glance, are a mystery—names in Japanese script starkly carved into them—but the real mystery is that the cemetery here exists at all.

Nikkei No Haka provides a glimpse of the history of the Comox Valley from 1895 to 1942. Municipal, Chinese, and Japanese cemeteries were established at the same time. The original group of Japanese immigrants came in 1891, recruited from coal areas in Japan to work in the Dunsmuir mines. The miners brought their families, and, over the years, the Japanese integrated into the community.

Thirty Japanese miners lost their lives in the mines, many more in the forest and fishing industries. Old age, disease, childhood illnesses, and other accidents also took their toll. Making a choice to move thousands of miles, embracing a new land, and burying your dead is commitment. Cemeteries fix you firmly to a place like nothing else. But, WWII removed almost all knowledge of the Japanese from this area. Before 1942 there were approximately six hundred Japanese living in and around Cumberland. After the internment of local Japanese on April 16, 1942, there were none—with the exception of permanent residents: the dead.

By the number of grave markers in this cemetery, I would never know that two hundred people are buried here. The markers stand to attention, encircled by a wall and watched over in the dappled shade of old hemlock trees. The stones look as though they have been placed deliberately, but the original graves were vandalized after the war, and many memorial markers were destroyed.

Today, it is quiet. I can hear the hum of the inland highway in the distance; the sounds of birds calling, and tree branches sighing in the breeze. A lot of history has passed through these gates. In the gloaming of the last rays of the autumn afternoon, the shadows murmur. It is not my past and it is not my sadness, but I feel it—to come so far and end up dead in a strange land.

Roughly translated, Nikkei No Haka means grave of the immigrants. Now, with time and sentiments softened, the cairn I see is all of the remaining stones, gathered together. Volunteers paint the fences and maintain the grounds; Buddhist priests come yearly to perform ceremonies over the graves that distant families cannot; former residents occasionally come to visit and reminisce with their old neighbours about the time before. No one speaks of the internment for it remains a painful memory. But the Japanese cemetery has become a place of peace once again. 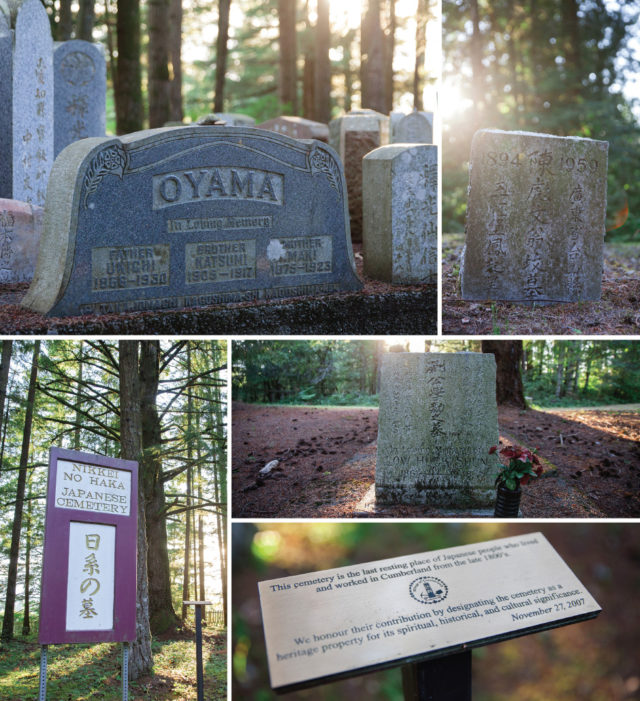