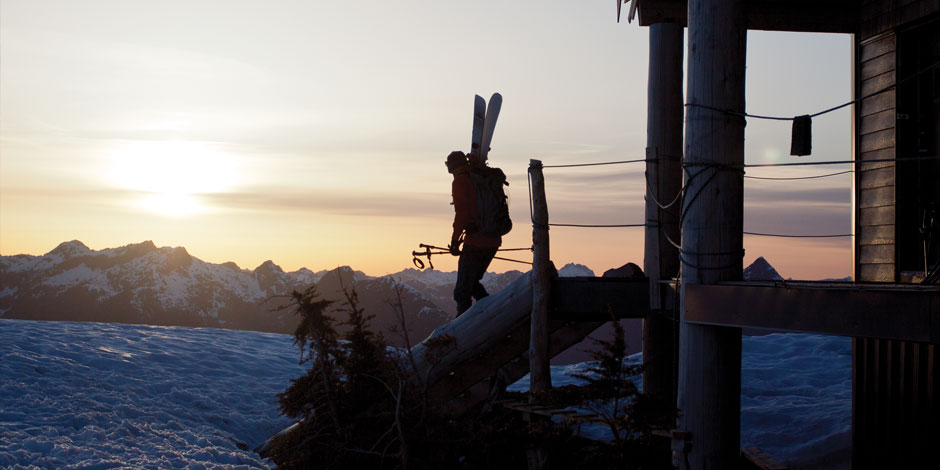 HOME IN THE HILLS

It took a community to build Vancouver Island’s backcountry hut.

I’m inching along the narrow ridge leading to 5040 Peak, a ski on either side of the crest, mushy spring snow in between, and an ugly consequence in both directions. I should be gripped, but all I can think about is riding a horse—or to be more precise, the expression “au cheval.” It’s mountaineering jargon, a sort of onomatopoeia that describes the frighteningly awkward climbing technique of straddling a knife-edge ridge crest just like you would a horse.

We’re not there yet, but I wasn’t expecting this much excitement when Alex MacKay and I set out from the new backcountry cabin on 5040’s flank for an introductory evening ski around this mountain playground. But, as we are quickly discovering, the Hišimy̓awiƛ Hut is full of surprises.

The cabin was built by the Alpine Club of Canada (ACC)’s Vancouver Island chapter and opened in January 2019. Rather than name it after some old, dead white guy, the ACC asked the Warrior Youth group of the nearby Yuułuʔiłʔatḥ (Ucluelet) First Nation for a suggestion. They chose Hišimy̓awiƛ (hi-SHIM-ya-wit), which means “gather together.” It sums up the cabin well.

The ACCVI had wanted to build a backcountry ski and hiking hut since at least the 1970s. The right mix of energy, motivation, and people finally came together in 2015 and a committee quickly identified 5040 as the ideal location: on public land, close to a ploughed road, and with good skiing and hiking terrain.

In early May, MacKay and I drive to the trailhead. It takes about two hours from the Comox Valley, first following the highways to Tofino and then, 50 kilometres west of Port Alberni, bumping up a logging road for 10 kilometres. A quad-crushing trail leads us quickly to the snowline. At frozen Cobalt Lake, we stop for a break and to admire the beautiful ski lines spilling down from a huge bowl before we make a final short push up to the ridge where the hut is perched.

Huge cedar posts donated by local First Nations flank the front of the modified A-frame and support the deck that basks in the spring sun. There’s an impressive view of the north faces of The Cat’s Ears and Triple Peak.

Even though the builders took winters off, it took less than two years to complete the hut. Martin Hofman, who was involved with the project since its inception, credits the speedy build to 400-plus volunteers, who donated money (hundreds of people chipped in), provided materials, and/or swung hammers.

“People showed up from all over,” he says. “I remember near the end it was November and the weather was absolutely horrendous, but 30 people still hiked up to help. I think [having] all those volunteers shows the need for a hut like this on the island. A lot of people thought it was a great idea and wanted to help make it happen.”

They did a beautiful job. Inside, there’s a kitchen/dining/living room with plenty of windows. Two six-person bunk rooms line two walls. A wood pellet stove keeps it toasty, propane powers the kitchen, and solar panels provide just enough electricity to recharge electronics and keep the lights on in the evening.

Alex and I settle in and then set out for a ski. It doesn’t take us long to find a tempting line off the back of 5040. We carve big turns in the slushy corn, the fall line sucking us lower and lower, down a face, along a rib, through a gully. At the bottom we look back up and groan.

An hour of hard skinning later we’re on the horse, cautiously shuffling towards the 5040 summit. The summit ridge soon eases up and I lift my eyes from my skis. It’s late in the day and the sun casts a golden light as it heads for the horizon. The peaks are a contrasting sea of pinks and oranges on one side and shadows on the other.

Ridges spider out from our position. One long ridge leads out to a neighbouring peak overlooking Port Alberni. Another widens into an alpine plateau that looks perfect for summer rambling. Several have beautiful north faces that roll like a kids’ slide into quiet valleys. As we’ll discover, they’re ideal ski terrain.

Through a gap in the mountains to the west is a funny blue line. I see islands floating in it. Is it Barkley Sound on the west coast? It is. We can actually see the open Pacific, more than 35 km away, beyond the rolling peaks.

Once the shock and awe wear off, I notice my growling stomach and then spot the cozy hut. Dry clothes, warm food, new friends, and a comfortable bed are right below our tips. We drop off the summit and ski to the front door of our long-awaited home in the mountains of Vancouver Island. 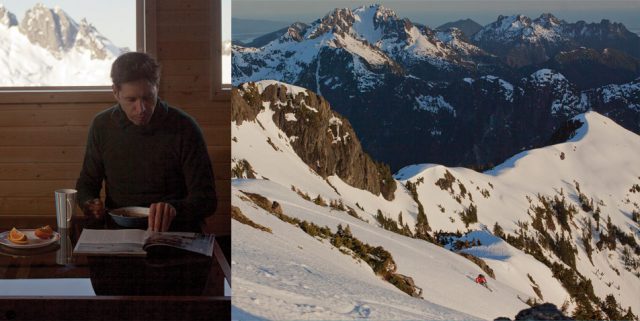