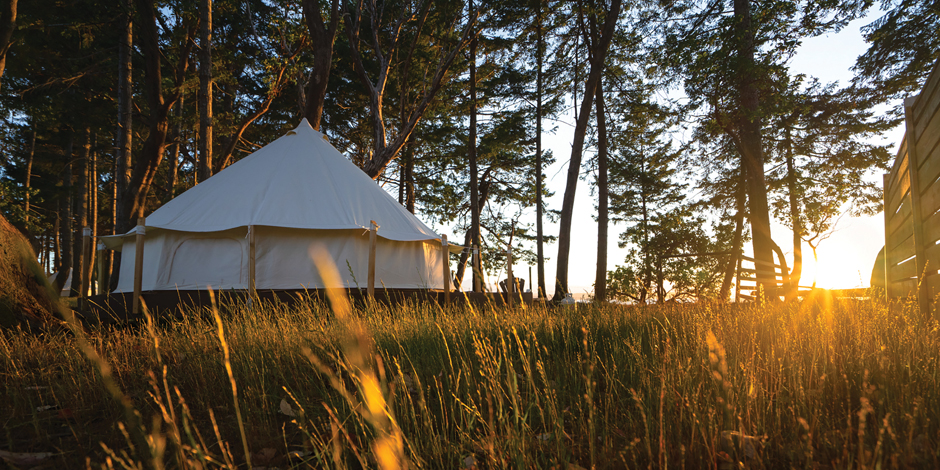 HOW YA GONNA KEEP 'EM DOWN ON THE FARM

On a sunny Saturday afternoon, Fossil Beach Farm is a-bustle with activity. People are sitting at long picnic tables on a wide lawn, tasting the half-dozen ciders that are made on the premises. Some have dogs at their feet. Kids are running around and bald eagles circle over the cow pasture and open fields. In the brand-new, open-air communal cookhouse, glamping guests are rustling up a late lunch after a morning of beachcombing, biking, or hiking.

It’s a safe bet that proprietor Aileen Fearman’s ancestors, the Savoies, would be surprised to see what’s become of the family lot at the northernmost tip of Hornby Island.

In 1921, Fearman’s maternal great-grandparents, originally from the prairies, arrived on Hornby and built their first house and barn on the property that’s now Fossil Beach. They had eleven children, including Fearman’s grandmother (number ten), and eventually bought plots of land on the island for all their male children.

Much like Fearman and her husband today, the Savoies did a lot more than “just” farm, although that was certainly their primary activity at first. They had beef cattle, and they grew pears, apples, hazelnuts, and walnuts as cash crops. Fossil Beach Farm cider is made in part from apples grown in the original orchard planted 100 years ago.

Several of Fearman’s great-uncles took up fishing for a living, and in 1929, one of them, Albert Savoie, set up a freight and passenger boat service which made it possible for people to go from Hornby to Courtenay and back in a day. He went on to launch the first Hornby-to-Denman car ferries in the early 1950s: the Hornby V and the Lorraine S (named for his daughter). Albert and his brothers, Leo and George, ran the ferries for decades before BC Ferries finally took over the route.

Fast forward to the late 20-teens. Fearman’s parents now owned Great-Uncle George’s property, which had been designated as ALR (Agricultural Land Reserve), although generations had proved that it’s tough to make a living purely through farming on Hornby Island.

Fearman, who was then working as a hospice nurse in Victoria, and her husband began looking into other revenue streams available to ALR property owners.

“Cider was starting to take off,” she recalls, and with new ALR licensing for cideries and wineries on the horizon—not to mention two apple orchards already on the property—cider seemed like the way to go.

Then, she says, “We wrote a whole business plan, bought an excavator, learned how to drive it,” and they were off and running. In 2017, construction began on the cider production facility, which was designed by renowned Hornby-based architecture firm Blue Sky Design, and the first Fossil Beach Farm cider was produced the following year.

The farm’s first glamping tents came in 2019. Fossil Beach Farm’s stunning location—above a secluded point, with views stretching from Denman and the Beaufort Range all the way back to Comox—makes it a natural location for agri-tourism. Large white canvas tents with wooden floors and queen-size beds are perched on a cliff under an avenue of towering trees. Each tent opens toward the northwest, overlooking the sea and Collishaw Point, where a kilometre of reef opens up at low tide and where significant dinosaur discoveries have been made. “I spent my childhood down there whacking rocks apart,” laughs Fearman.

Having seen the appeal of glamping in the Outback, the couple had a feeling it would be a popular addition to Hornby’s accommodation options. Fearman took on the glamping and marketing side of the business.

In their first year of the glamping operation, they were rewarded with 95 per cent occupancy, and they looked to be on track again for 2020, until COVID-19 hit. The bottom fell out of their business plan in March. “April was very quiet; we just put our heads down and worked,” notes Fearing. They were building the new open-air cookhouse and starting a new orchard, plus taking care of all the usual farm-related tasks (other than the cattle—they lease some of their land to a farmer for his herd) and looking after their energetic toddler, Kai, a fifth-generation Hornby resident.

In early May, bookings began to rebound and they began to feel cautiously optimistic about the summer ahead. They’ve had to incorporate many safety changes and extra protocols and communication related to the virus, but in our cautious new times, 80 acres of farm, forest, and beach on a beautiful island (with fresh cider!) is actually an ideal travel destination.

Although Fearman and her family still return to Victoria in the winters, she’s keenly aware of her family’s place in the island’s story. “My grandfather helped build the preschool and my mom went there when it was the elementary school. Now it’s the preschool that Kai goes to and my mom teaches there.”

She sees Fossil Beach as one more element in creating and maintaining a “vibrant community that’s full of more than one generation” on an island where 68 is the average age.

And though the property looks different from how it did 100 years ago, Fearman’s forebears would certainly applaud the work and initiative that keeps the farm in the family. Last year, before the virus hit, she notes: “When we had a big group of people around the table, sharing food together, it’s not that different from what Granny would’ve had.” 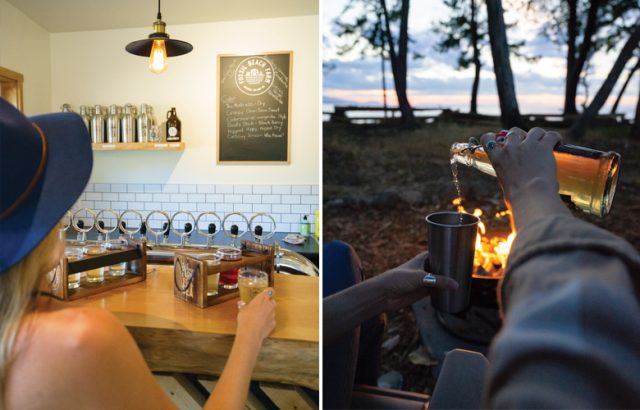