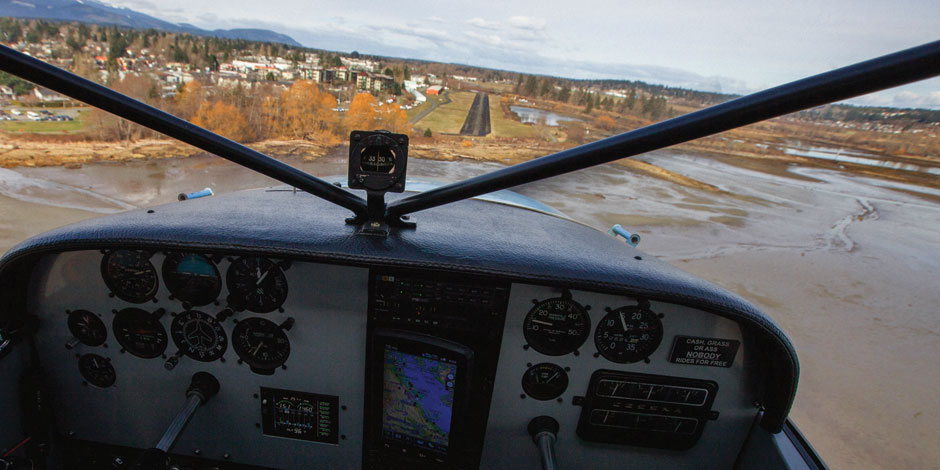 IF YOU BUILD IT, THEY WILL LAND

The history and community behind Courtenay’s beloved Airpark.

When my kids were younger, I logged long hours at the Rotary Skypark, going half-dizzy as they performed endless laps on the merry-go-round and other playground apparatus. Cessnas, Pipers, and all manner of small aircraft taking off and landing just over the fence nearby were an added entertainment bonus that I took for granted, or at least didn’t give a lot of thought to. However, the story of the Courtenay Airpark is unique on many levels. It’s a busy airstrip in the middle of a city, for one, but it’s also a testament to a community’s volunteer spirit and love of flying.

Built with an initial investment of $1000—and countless hours of donated labour from founding members who put in time on graders and other machinery—the airpark saw its first aircraft landing on September 20, 1964. The airstrip has been an unusual hub of civil aviation in the Comox Valley ever since.

“There are very few places where you can land a plane and walk downtown to a restaurant,” says David Mellin, a private pilot, longtime volunteer, and former president of the Courtenay Airpark Association.

The airpark’s location next to the Courtenay River also enables floatplanes to use the facility. According to Mellin, the Nelson Airport in the West Kootenays is the only other airstrip in BC within a few blocks of a city centre that services both wheeled and float planes.

In many ways, the airpark owes its existence to CFB Comox. Because it was a military installation, civilian aircraft used to be prohibited from landing there. In the early 1960s, local aviation buffs like Eric Franklin eyed up a piece of boggy land next to the Courtenay Estuary that was then occupied by the city’s sewage lagoon.

A deal was struck with the City of Courtenay to build an airstrip on 18 acres of City-owned land. So began the story of a completely volunteer-run airpark that has been sustained for nearly six decades. Step into the pilots’ lounge, and the décor feels like it hasn’t changed much in that span of time. It’s a functional space where visiting pilots and association members can gather over a brown-bag lunch and talk about the weather and planes. Its walls, decorated with faded photographs, also serve as a record of the airpark’s history, both its triumphs and its dark moments.

Early in the airpark’s history, an RCMP plane clipped the treetops while its 28-year-old pilot, Constable Michael Robert Mason, was trying to land, causing it to crash into the Courtenay River. Both the pilot and his passenger died. However, the tragedy eventually resulted in the realignment and lengthening of the gravel runway to 1800 feet, making for safer approaches and landings. In 1994, the longer, Transport Canada-approved runway was paved, marking another important milestone for the airpark.

A few years before the longer runway went in, the evolution of the airpark land into a functional public park began. It started with the draining of the sewage lagoon and its rehabilitation into a salmon-rearing pond and was followed by the construction of a fully accessible walking path, complete with wildlife-viewing platforms, encircling the airstrip. In 2010, the Rotary Skypark was completed.

Today the Courtenay Airpark remains a going concern. The association boasts roughly 100 members and the airpark is home to nearly 70 aircraft: “More than CFB Comox,” Mellin notes with a laugh. There’s also a page-long waitlist of people wanting hangar space.

In 2018, the future of the airpark was called into question when the City of Courtenay started discussing other uses for the land. This prompted Mellin and his fellow airpark association members to sharpen their pencils and make a strong argument for the airpark.

“A lot of people thought it was just a bunch of rich guys with planes. There’s no doubt flying is expensive, but [the airpark] is all member-funded and -managed,” Mellin says, adding that the facility contributes as much as $50,000 per year in parking revenues to city coffers, and is frequently used by both RCMP and BC’s Air Ambulance Services aircraft.

For Darren Adam, co-owner of the Cumberland Brewing Company, airplane mechanic, avid pilot, and Courtenay Airpark Association member, having an airstrip in the middle of the Comox Valley is a big part of what makes life here special.

And affordable it certainly is: it costs visitors a mere $10 per day and $40 per week to park a plane. Airspeed High Ultralight Flight School, aircraft-maintenance company AP Aviation Services, an association-owned fuelling station, and the Park Café, which serves up homemade soups and sandwiches, are all located at the airpark, providing added value for aspiring pilots, plane owners, and aviation buffs.

Mellin views the airpark as a community asset that would be impossible to replace at today’s property values. “It’s a real diamond. We get so many visiting pilots who tell us that it’s one of neatest little airports around.”