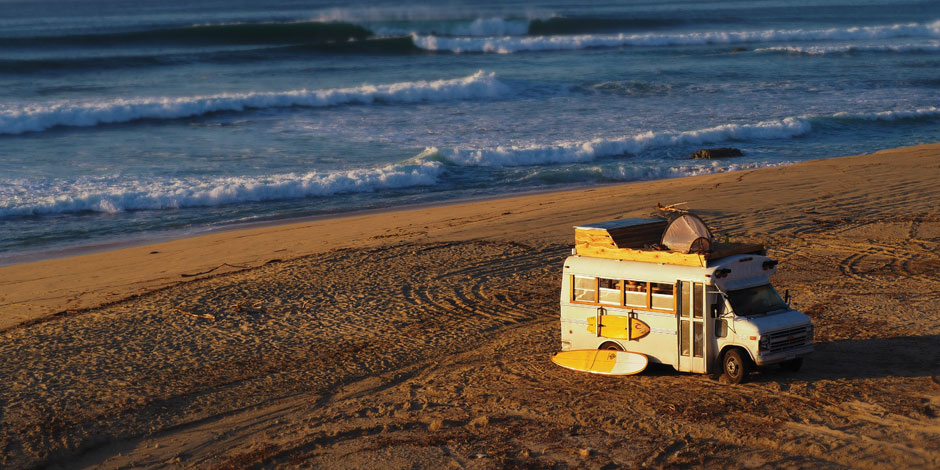 IN SEARCH OF THE SIMPLE LIFE

Through an ever-changing landscape, a visual artist finds direction with a four-month road trip in a customized Chevy school bus.

No matter where I’ve ended up on this journey, the coast has always called me back and the surf has kept me sane. Growing up in Kye Bay, the beach was my whole world. I’d spend hours lounging naked in the white sand and cruising around in our canoe and sailboat. Our physical bodies are more similar to the ocean than the earth. There’s a feeling of returning home, to the place where it all began, that really resonates. Water is life. From hurricanes to calm, glassy days, it mirrors our emotional states. Like ocean swells, our lives are governed by cycles, with highs and lows. It’s how we choose to ride them that defines who we are.

There came a time in my life where I became lost at sea—a tidal wave of subconscious thoughts, feelings, and actions I kept bottled up for a lifetime swept me into the depths. I’d floated off track and was sick, lonely, and confused. I decided to slow down. I moved to Tofino, and the energy of the rainforests and ocean slowly worked its magic. That summer, an old friend moved onto the property with his new, renovated short bus. We did a little road trip, and a seed was planted.

My whole life I’ve wanted to do the ultimate west coast road trip from Vancouver Island to Cabo San Lucas. I felt the need to reconnect with humanity and Mother Earth in a big way. I wanted to remind myself and others that the world is 99.9% loving and compassionate. I was also tired of moving in and out of houses each year and paying rent. I needed a sea turtle shell, and followed my intuition by purchasing a 1990 Chevy Van 30 Thomas school bus off Craigslist.

I moved back to Comox and built a makeshift outdoor shop on the family property. The end goal was to create a cozy, interactive living space and art studio/gallery that would draw people in like a west coast campfire. I worked around the clock for nearly five months, and woodworking quickly became my meditation. I salvaged 95% of the wood and metal from friends, mills, and scrap yards. To showcase the beauty of local wood, I let the natural curves of the red cedar and driftwood flow through the project. The most difficult piece was the floating crystal table, symbolizing a tidal pool and the heart of the bus. I spent weeks digging out rot, sanding and epoxying, until the cedar burl was filled with hundreds of crystals, lights, phosphorescence, and beachcombed items from around the world. I called the bus Bodhi, short for Bodhicitta, a Buddhist term meaning “awakening your inner heart”.

On April 20, 2018, I screwed down the final piece and picked up my Columbian travel partner, German, a longtime friend from Tofino who’d just finished at UVic for the spring. The main rule of the trip was to wake up each morning with no set plan on our route to the southern tip of Baja. This gave us time to connect with the landscape and locals along the road. We drove straight to the Cascade Mountains in search of hot springs and waterfalls. This route led us to the hostile ranches of the Oregon outback, and through multiple blizzards as we snaked our way south to Crater Lake and the California border. The sun finally greeted us in Mount Shasta, California, after some icy cold nights in mountain passes. The scenery changed into lush, rolling hills with old growth Ponderosa pine, juniper and black oak forests, exploding back to life after the winter. We only paid for camping once in the States and twice in Mexico. The ease of boondocking (car camping) and lack of police presence surprised me, and the magic of waking up in new locations each morning was the highlight of the trip. We had endless hot springs, rivers, lakes, beaches, and old growth forests all to ourselves.

We hit snow in the High Sierra and headed for the coast to cruise the scenic and bustling Highway 101. The local farm/artisan markets were the best places to meet people, and we played music and sold prints of my artwork to make extra gas money. It’s always the kindred souls you meet that make the journey. We met a local in San Francisco who invited us on his sailboat, and nearly got us stranded on an island overnight, wet and freezing, when we broke the rudder and the engine stopped working. South of Big Sur we randomly came across the grounds of Lighting in a Bottle, a 37,000-person desert music festival, and got jobs volunteering. In San Luis Obispo we met an LA local who invited us to park at his place in Hollywood, dropping everything to give us a weeklong tour of the city and mountains in his vintage VW van and Mercedes convertible. In San Diego we got invited by the Adventure Sports Network to shoot an episode for Van Tours documenting the culture of van life in America.

By the time we hit the Baja border it was nearly summer and scorching hot. One of our tires exploded after crossing the border in the 45 degrees Celsius heat. The temperature extremes were one of the biggest struggles, but also meant we had the peninsula to ourselves. This was the freedom I’d been dreaming of, surfing our own private point breaks, beachcombing giant abalone, and free diving for fresh seafood. I love Mexican cuisine and cooking, so having a full kitchen and access to endless seafood made for epic gourmet meals on the road.

We finished our drive on the East Cape of the Southern Baja, snorkeling the protected coral reefs of Cabo Pulmo and surfing the endless right-hand points of the East Cape. This was our longest off road, 40 km along rugged dirt tracks hugging the coast. When it was time to head home, we journeyed through the Mojave Desert and Southern Sierra Nevadas. Highlights were Joshua Tree Park, the Sequoia National Forest, and the hot springs at Mammoth Lakes. As we headed back to the 101 we were smoked out by forest fires before weaving our way up the coastline to Oregon. Coming home after 15,000 km and four months on the road was bittersweet. It took me weeks to settle and find my flow. I’m an introvert and usually travel solo, but I came home from this trip with a brother, united by a lifetime’s worth of incredible memories.

There’s something so magical about road trips—the peace that comes with the gentle hum, constant focus, and ever-changing scenery. Adventure stokes my fire, and crafting a simple, creative lifestyle, full of constant change and new energy, is the perfect vessel for surfing life’s swells. 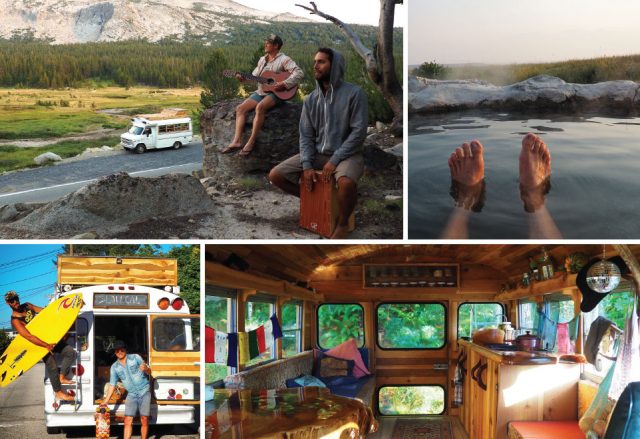