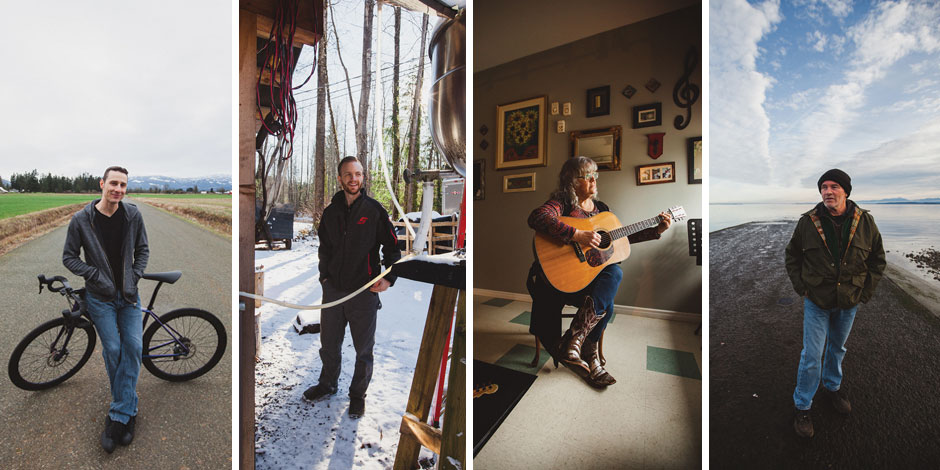 But in June 2018, he took his habit up a notch by riding across Canada—in three weeks.

Leaving home with little fanfare, Rush pedalled more than 7,000 kilometres of Canada’s highways, through every province except PEI, seeing places that most of us have never heard of, let alone visited.

Having his dad, David, drive a support van was great for morale after each 13+ hour day in the saddle. “I’m indebted to him for all the work he did,” says Rush.

The prairies were the most strenuous. He battled “five days of headwinds from the Alberta-Saskatchewan border all the way to Thunder Bay.” He preferred Newfoundland, where he arrived by ferry and then circled 900 kilometres from Port Aux Basques (“a cool little town”), through Corner Brook to St. John’s.

Back home, he rode just enough to bring his total kilometres for the month up to a staggering 7,500—more than anyone else on the planet, according to Strava, a distance and workout tracking app used worldwide. With this epic trip under his belt, it’s not surprising that he’s thinking of taking on the legendary Trans Am Bike Race (a 6,200 km, self-supported suffer-fest across America).

With an average of 330 km/day, Rush believes he broke the speed record for crossing Canada from Mile Zero to Mile Zero by about 10%. But he modestly adds, “It’s all unofficial.”

Only a maverick would try to make syrup from the Comox Valley’s bigleaf maples. Since their sap has only half the sugar content of sugar maple sap, you need a lot more of it to make syrup.

David Janzen, a mild-mannered motorcycle mechanic who lives in Courtenay, took up the craft a few years ago. He cheerfully admits that he isn’t good at sitting around. “I’ve got to be doing something,” he says.

Last spring, that “something” was spending several hours, two to three times a week, collecting sap from the plentiful maples on his parents’ Black Creek farm. He and his dad, Glenn, had been tinkering with making bigleaf syrup—which is dark, delicious, and intensely maple-flavoured—for a while, but in 2018 Janzen aimed to increase production. He will be selling it under the name Beneath the Bark at the Comox Valley Farmers’ Market this coming year.

It’s definitely a labour of love—emphasis on “labour.” The 5,000 litres of sap that Janzen collected last year became 70 precious litres of syrup through a simple but time-consuming process: tap the trees, collect the sap, filter it, evaporate it down to 60% sugar in the outdoor boiler, bring it inside to boil down to syrup (66% sugar), filter it again, and bottle it.

Although Janzen has no plans to quit his day job, he intends to keep his sweet hobby going for years to come. “I enjoy doing it,” he says. “To see it go from sap to syrup is fun.”

A former social service worker, Lynn is passionate about the positive impact of music on people’s lives. “It’s so important for mental health,” she says. For example, parent/child music classes subtly support families by teaching them how to build attachment. And when people make music together, an undeniable sense of community is created. “It’s not just about the guitar lessons,” says Lynn. “It’s about somebody wanting to be a part of something.”

To that end, she hosts several weekly drop-in acoustic jams. Unlike other local jams and open mics, hers are learning jams where people can learn new songs and riffs and practice soloing. She describes the studio as “a good, safe place to help you figure out what jams are like.”

Lynn is frequently on the road. She tours as a member of The Savage Hearts Trio, playing “spicy southwestern bluegrass” with Annie Savage and Jodi Harbin. And with her In The Jam Music program, she and a musical partner visit small towns to deliver a “travelling jam clinic,” a weekend of music and instruction for groups of 20-25 people.

Closer to home, she’s hoping to offer mobile music lessons at seniors’ lodges as another way to enhance community connectedness. “The more diverse the opportunities [to get involved in music], the better,” she says.

It’s clear that, for Lynn, music and community are inseparable.

If you walk along the beach near Point Holmes you may see Scott Crawford, camera in hand. Look around and you may also see a couple of large black birds hovering nearby.

Over the past six years, Crawford has built a relationship with a pair of ravens who live on the bluff above the beach. Initially, he pursued them unsuccessfully with his camera. Then he began observing them quietly, letting them know he wasn’t a threat. After a few years, the ravens finally showed an interest in him, which intensified when he began imitating their calls and became able to converse with them.

By 2018, his fifth year of interacting with the birds, they would come to meet his call. In an amazing display of trust, the ravens brought their first baby to meet Crawford and even left him to babysit while they rested nearby.

Observation is paramount for Crawford. Over the years, he’s gained a great deal of firsthand knowledge about his ravens’ behaviours, relationships, calls, territory, and feeding habits. (For example, the birds just say a quick hello on garbage days, as they are busy scavenging.)

“Part of what I enjoy with these birds is trying to understand what they’re trying to communicate to me.” The ravens will lead Crawford to dead deer or ducks on the beach, knowing that his presence keeps predatory eagles away while they feed. “I’m their tool! There’s no friendship here. I’m being used by ravens,” he laughs.

Category: In The Field, Volume 18