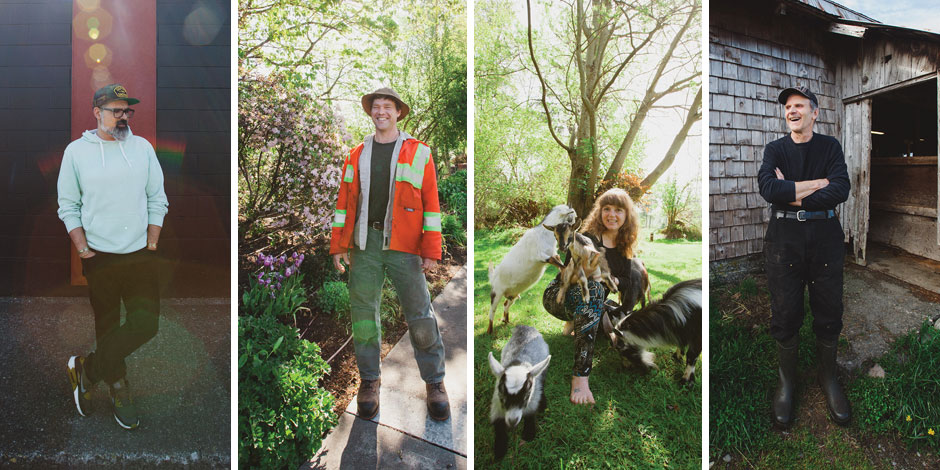 “I’ve been a traveller since I was three,” says Comox-based MC, songwriter, and producer Mo Moshiri. He was born in Iran during the revolution; after his father became a political prisoner, he and his mother fled the country, moving to Germany, the US, and finally Canada.

Moshiri began making music as a teenager in Vancouver, eventually becoming a founding member of the socially minded hip-hop collective Sweatshop Union. When the band went on hiatus in 2013 after more than a dozen years of recording and touring, he found himself missing the tight friendships and collaborative energy of the group.

But the songs kept coming. He believes that inspiration is in the ether: “Things are there, and you may download them, feel them, or hear them,” he says. “If you don’t take hold of them, someone else might.”

He released his first solo single “Come Again” in February (along with a video featuring scenery of the Comox Valley), and his album Can I Tell You Something?, a collection of 11 songs, comes out in July 2019. His lyrics are thoughtful, his hip-hop rhythms catchy and smooth.

His songs explore politics, relationships, philosophy, and social justice, but he’s not preaching, just looking to create connection with his audience. “For me, the music is a conduit for conversation.”

Moshiri’s very appreciative of where he is at this moment, musically speaking. “I feel like I’m on this wave right now, kind of answering the call.”

“Life could get dull if you don’t keep learning,” says this self-described botany nerd, who has been the City of Courtenay’s Horticulture Supervisor since 2013. With his team of four gardeners, plus summer employees, Johns is the man who brings colour to Courtenay’s parks, roadways, and municipal buildings.

According to Johns, when planning public gardens, you’re always thinking six months ahead. The whole team collaborates to create the designs for planting the following May, and these orders are placed in October. Bulbs are ordered July 1 and planted around Halloween.

One of Johns’ main concerns is drought resistance. “We’re trying to really rein in water consumption and still have pleasing displays,” he remarks. One of his strategies is using bulbs (40 types this year), which are low-maintenance but provide “an incredible show in the spring,” he says happily. When replacing old trees, Johns has learned that planting smaller trees is both water and budget-friendly. They transplant well and cost much less.

For the summer, the team chooses reliable, long-living, hardy cultivars, with lots of local species and about 5-10% unusual blooms. Another efficiency boost has come from switching some of Courtenay’s famous Mile of Flowers beds to perennials, which take less water and are beautifully abloom before the annuals even get planted. The team is also working with four-season plants. “We want to create an environment that’s got something captivating for the whole year.”

Thanks to his “incredible mentors and colleagues” throughout his gardening career, Johns says he’s lucky to have gleaned a great deal of information and been able to apply it, adding that “Plants have the answer for a lot of things.”

For years, yoga instructor LJ Jackett has taken numerous courses around the world in “any and all kinds of yoga,” and incorporated this training into the classes she teaches. When she heard about a new trend called goat yoga, she knew it would be a perfect fit for Vancouver Island—and for her as a teacher. “What could be better,” she says, “than incorporating yoga and animals and nature and people?”

Mutual friends connected Jackett with Sarah Fountain, whose Black Creek farm has a purpose-built hall for parties, where people can get up close to cuddly farm animals. In December 2018, The Barnyard Party Animals’ hall hosted the Valley’s first goat yoga class taught by Jackett.

“We often have the idea that we have to take yoga really seriously,” she says. “But by incorporating animals, we can have a sense of play.” During class, there’s a lot of laughter and random exclamations as adorable baby goats walk right through participants’ downward-facing dogs or step on their hands or legs.

Both adult only and family-oriented classes are offered, and after each session there’s time to cuddle and take pictures with Fountain’s goats and other animals like ducklings, hedgehogs, and lambs.

Jackett also teaches outdoor yoga classes and is launching hike and yoga forest sessions this summer. “I’ve been a crazy animal and nature freak my whole life,” she says, “so I truly feel like I’m living a purposeful life, helping others connect with their bodies, breath, nature, and animals.”

When I ask Guy Sim what it’s like be a farmer in the middle of a suburb, he simply says, “It’s hard work.”

This soft-spoken man grew up on Birkdale Farm on Guthrie Road in Comox—you’ve probably driven past the lush, pastoral space—and has been running the farm since 1970. Birkdale Farm was started by Sim’s grandparents George and Mabel Laban in 1920 and taken over by his father Alex Sim in the 50s, when the area was mainly agricultural and forested land. Guy Sim has become a maverick by circumstance during a half-century characterized by a growing disconnect between urban society and the agricultural community.

Aside from the usual concerns of farmers, (weather, quotas, rainfall, etc.), Sim’s unique location poses extra challenges. For example, he frequently needs to move his cows across busy Guthrie Road to another pasture. “It’s always a worry when you’re moving cattle.” Incredibly, some drivers will ignore the farm workers holding stop signs and try to drive on through. Another issue is that people toss garbage into his fields (don’t do this, people), in particular aluminum cans. The harvester chops them up and scatters them, and the shredded metal can cut the cows’ feet.

Like most farmers, but unlike most of his neighbours, Sim works seven days a week. He and his three full-time employees milk over 90 cows twice daily for collection by truck every other day. Most of it goes straight to Tree Island Yogurt; the milk of Ayrshire cows has a high fat content ideal for making the product.

Birkdale Farm’s 190-acre oasis is protected as part of BC’s Agricultural Land Reserve, so for the foreseeable future, the only housing you’ll see here is Sim’s farmhouse and the three barns filled with his 220 or so red and white Ayrshire dairy cows.

Category: In The Field, Volume 19