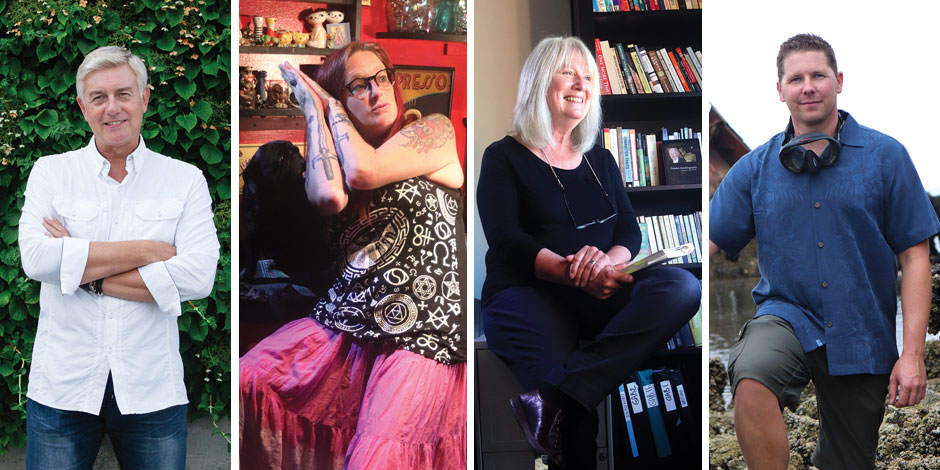 If you recently arrived in the Comox Valley and found a family doctor with little trouble, you can thank Dr. Peter Gee.

As Site Director of the Strathcona Family Medicine residency site for UBC Vancouver Island, this genial UK-born family physician has had an enormous influence on the area’s patient-care situation. The residency program, which launched in 2013, brings in eight recent med school graduates annually to practice in Courtenay/Comox/Campbell River.

In addition to his own busy medical practice, Gee is responsible for attracting residents to the area—interviewing and hiring top candidates, placing new doctors into local medical practices under the supervision of experienced doctors, and overseeing their ongoing training.

One of the key parts of the Site Director’s job is making sure he’s connected to a wide range of local doctors to create the best learning environment for residents. Gee is a key liaison between the community, UBC, and his new doctors, many of whom fall in love with the Island during their two years of training.

“I love medical education and it’s brilliant being given the opportunity to do it,” says Gee, who frequently uses the word “joyful” to describe his role. He’s thankful for the five local doctors who assist with site responsibilities part-time, and his full-time Site Coordinator, Pam Blake. “None of this would happen without this amazing team,” he says.

However, it was Gee himself who took on the task of launching the program in 2012, and so far 50 residents have been attached to Strathcona. Over 70% of them have remained here.

Everything is a canvas to Courtenay artist Karen Day: her home and garden, her activism (she once dressed as an oil slick to protest a pipeline), and her body, which is adorned with many tattoos.

Day’s “gothic and spooky” art incorporates skull imagery and bones. There’s a coffin door on her family’s chartreuse-coloured house on Willemar Avenue, where she says the yard used to house a coffin-maker’s workshop. Since she’s a devotee of vulture culture, which centres around a fascination with bones and animal specimens, this house is surely the perfect fit.

She makes art every day. “I’ve got a million projects waiting to be worked on,” she says. She does a lot of encaustic painting (with melted wax) and jewellery making, but also experiments with creating dichroic glass, “happy rocks” with toothy smiles, costumes, and more. For her, art is both therapy and a way to express herself.

Though she declares that she takes pleasure in being outrageous, Day is friendly and welcoming in person. In 2018, she started a neighbourhood event called the Gypsy Market. This twice-monthly market (July and August only) hosts a small number of vendors—including Day with her art and jewellery—selling soap, produce bags, backyard-farm produce, and other treasures. There’s even a fortune-teller.

Day is a fan of sweater bombing, the renegade grassroots art form where urban landscapes are adorned with yarn. “People should be able to put art out there,” she says. “You can be monochrome—but you don’t have to be.”

“It brings together all the experiences I’ve had in the past,” says Wendy Bancroft of Guided Autobiography (GAB), a powerful process developed by gerontology pioneer Dr. Jim Birren for older adults to write and share stories about meaningful events in their lives.

Bancroft leads small GAB workshops in Courtenay and online; she also trains others worldwide to become GAB teachers. She does indeed have the ideal skill set for it—she’s deeply interested in other people’s stories, which has led her to various jobs such as CBC TV journalist and story producer, film producer, senior researcher with two national research organizations, and writer.

Though Bancroft introduces the fundamentals of writing a good story, GAB is really about learning to write from the heart. Every class is devoted to a theme like family, work, health, a turning point in life, or a death, among others. Each student writes a two-page story on that theme, and shares their story aloud with other members of a small group, who provide feedback about the experience.

Bancroft loves the magic of watching her students share and communicate more and more with each other every week. “People usually become incredibly bonded,” she says.

Students often join because they want to write down their life experiences for their loved ones, but deeper personal insights tend to emerge during the six-week workshops.

“It’s not just about looking backwards,” says Bancroft, “it’s about using that knowledge to think about where you want to go in the future.”

After years of exploring many of the planet’s best-known dive sites, Maxwel Hohn still gives the east coast of Vancouver Island a big thumbs-up for its “unique diversity of marine life that can’t be found anywhere else in the world.”

This Royston-based adventure photographer/filmmaker’s work showcases the amazing underwater life all around us, like the thriving, colourful environments of Discovery Passage, Nanoose Bay, and the coast of Hornby Island, where playful Steller sea lions—“the most interactive things I’ve ever seen”—congregate in winter.

When he was 17, Hohn embarked on a summer of travel. He started in Honduras, where he promptly got hooked on scuba diving, ditched his acceptance to film school, became an open-water instructor, and began roaming the globe, diving and teaching, for more than a decade.

In Zanzibar, inspired by the island’s natural beauty and marine life, he bought a GoPro and taught himself photography so he could share images with family and friends. Now he earns a living with his camera, selling underwater video and stock images, doing product shoots for gear manufacturers, handling photography and social media for various dive-related firms (including Pacific Pro Dive in Courtenay and Campbell River), and teaching underwater photography.

He also does environmental surveys, like herring-spawn evaluations, and participates in the occasional construction project like Campbell River’s recent dam upgrade.

This fall, he’s off to explore French Polynesia, where he will capture images as intriguing as the shots of tadpoles in the “little hidden worlds beneath the lily pads” that he recently photographed in a remote, crystal-clear river canyon right here on Vancouver Island.

Category: In The Field, Volume 20