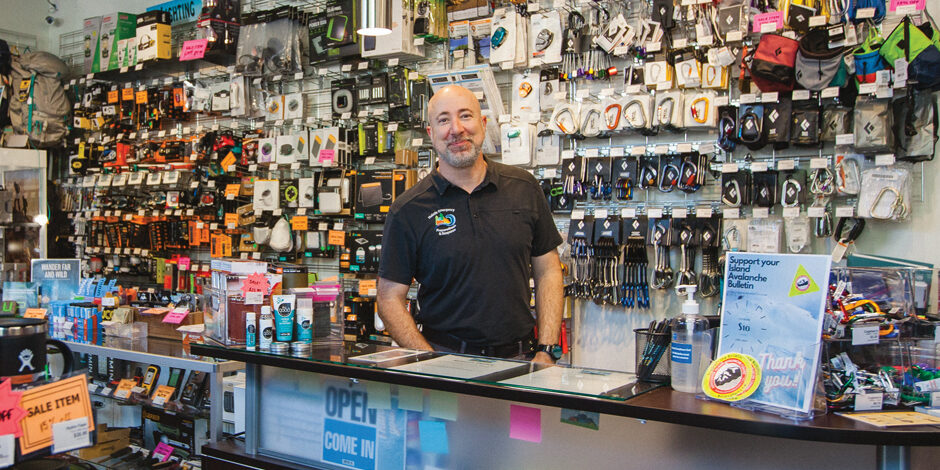 IT'S NOT ABOUT THE MONEY

At SOS Gear, every sale helps save lives.

What separates SOS Gear from other outdoor stores is not what it carries, but what it doesn’t.

Like most gear shops, the store, located in a cul-de-sac across Cliffe Avenue from the Courtenay Air Park, is stuffed with covetable products. Sleeping bags, climbing gear, and face masks hang off the walls like kids at the bouldering gym.

Notably missing is clothing. Beyond a few Buffs and mitts, SOS Gear is naked.

That’s by design. Where most stores fill their racks with apparel because it makes the most money, SOS’s inventory is selected for its ability to save lives.

“Everything we carry is designed to work in an emergency,” says owner Marc D’Aquino. “It’s about public safety. Selling this equipment means people are using it, which makes the job of search and rescue crews easier and safer.”

SOS is a sideline to D’Aquino’s other company, Holistic Emergency Preparedness & Response, a non-profit that helps communities anticipate and prepare for disasters. Often his work involves outfitting the community with a trailer filled with everything they’ll need to survive for a week without outside contact: shelters, food, water treatment, generators, power banks, computers, and software. “It’s all the stuff you don’t know you need until you’re in the middle of a disaster,” says Aquino.

Since Holistic was already stocking the gear, D’Aquino realized opening a retail location made it available to everyone—and proceeds from gear sales could help fund some of the pro bono work Holistic does within communities.

It’s all part of D’Aquino’s commitment to creating a better society. About 20 years ago he was unhappy and unfulfilled. (And it wasn’t just because he lived in the Lower Mainland.) A counsellor suggested he might find fulfillment by giving back to the community. The idea resonated with D’Aquino, so he joined Surrey Search and Rescue (now South Fraser Search and Rescue). He loved the work and the sense of community and purpose it gave him, and quickly became certified to lead search and rescue training.

His growing expertise led to a job helping First Nations reserves identify potential emergencies (forest fires, floods, mudslides, earthquakes, tsunamis, etc.) to figure out what they could do to prevent them—and how to respond and recover if one happened.

While teaching the four pillars of emergency management—preparedness, mitigation, response, and recovery—D’Aquino discovered he was passionate about the subject: “It quickly became my full-time focus.” That work evolved into starting Holistic Emergency Preparedness & Response.

Now based in the back of SOS Gear’s retail location, Holistic works with communities and neighbourhoods across British Columbia and Yukon developing emergency plans, training people, and outfitting them with all the necessary kit to deal with disaster. D’Aquino has helped Tofino plan for a tsunami, Lillooet to prepare for a forest fire running through town, and members of a Comox Valley neighbourhood work together to become self-sufficient in the event of a major earthquake.

Typically, communities pay Holistic with government grants and funding, but these aren’t consistent and often don’t cover every cost. D’Aquino opened the store to fill those gaps.

Take the tiny west coast village of Zeballos. A government grant covered its purchase of an emergency trailer, but not the training to go with it. “If you don’t know what’s in there and how to use it, it’s not going to do you much good,” D’Aquino says. Money earned through SOS Gear offset the cost of giving the training to Zeballos for free.

“The whole purpose of the store is to put revenue into public education,” D’Aquino says.

That education is needed more than ever, as evidenced by a COVID-related increase in business for both of D’Aquino’s ventures. Many communities were not ready for a health emergency, and the pandemic opened eyes to gaps in preparedness, leading people to Holistic. Likewise, D’Aquino estimates participation in everything from hiking to backcountry skiing doubled in the last year—and so did business at SOS Gear.

Some customers shop there because the store contributes funding to the local search and rescue teams. Others like its selection of high-quality gear vetted through real emergencies and search and rescue feedback. And there’s the expertise. D’Aquino and his staff probe customers to make sure they’re buying the right product for their intent and experience.

“I think the reason we’re successful is that we’re not here to make money off the misfortune of someone,” D’Aquino says. “I hear all the time that someone drove down from Campbell River and bought something they could get for the same price somewhere else because of our business model.”

When he hears stories like that it makes him feel good about what he does, in a way making money for its own sake never could.