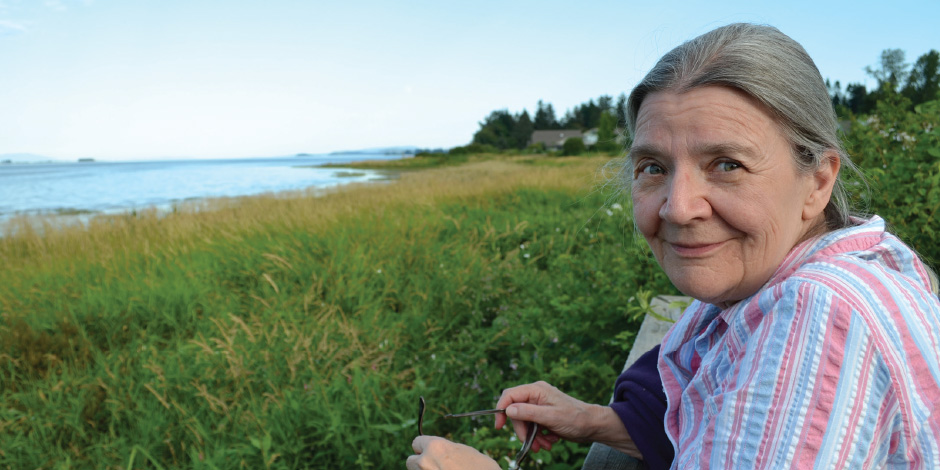 As editor of the Watershed Sentinel, B.C.’s award-winning “scrappy” environmental magazine, Delores Broten has been a key mover-and-shaker in the local progressive community since she moved to the Valley with her partner Don Malcolm in 2007. She also writes a personal blog about her journey with Don, who was diagnosed with Alzheimer’s in 2005.

CVC: The magazine is in its 27th year of publication, and now you’re diving into book publishing with Joyce Nelson’s Beyond Banksters: Resisting the New Feudalism. What has been your journey to this point, and how is it going?

Delores: It’s going OK. Ever since I realized Hillary Clinton is older than I am, it’s been going OK!

I’ve been interested in print since before I could read. A large part of my life has revolved around print, publishing literature, the impact of literature on society. Even when I was working full time as an environmentalist, I was studying pulp and paper. So there’s something about paper and print that has governed my life, in a funny way.

The magazine started as the Cortes Island Forest Committee newsletter, which was a free photocopy we put in mailboxes. Because there was so much environmental info that was all interconnected, my partner Don Malcolm and I decided to start a magazine, which was a little nuts (laughs). Then people started placing ads and subscribing without being asked – Ruth Masters here in the valley was one of our very first subscribers.

I always say the mag was a bit like a developing country: we didn’t have cash, we didn’t have many resources, but we had labour. It survived with a lot of help from volunteers and eventually it evolved into a real magazine, but it was a long, slow process.

CVC: How does your writing, publishing, and editing work fit in with your journey with Don?

Delores: Don and I were always partners in everything. We worked together in our organic garden, the environmental movement, and the magazine. And then Don became ill with dementia, and I started keeping notes. Eventually my keeping notes turned into the blog that I have now, which is very therapeutic for me – and I know that lots of people are sharing this life journey with us. Also, because dementia is such a big social problem, I feel it’s important to raise its profile so that we can get more research, better care, better public education.

CVC: What has kept you going and what keeps you going now?

Delores: In the relationship with Don, which has changed totally since he became ill, in some ways it’s like a stripping down of the soul, we’re down to bare essence, and in a way that’s an amazing, good thing.

In my environmental and social justice work, which is what all this print is about, it’s about knowing that this is a very long-term human project, and knowing that I’m in a direct line of people that have been fighting for social justice – ever since recorded history anyway. Euripides first wrote about the plight of women in 300 BC. We only got the vote fewer than a hundred years ago, and we’re only beginning to imagine what a society without racism or sexism would be like. In other words Rome wasn’t built in a day, and it wasn’t torn down in a day either. I see the work that we do every day as part of that long-term continuum, so it doesn’t matter whether it works or fails on a day-to-day basis. Just realizing – going out and looking at the stars and realizing that we’re so small in the grand scheme of things… I suppose that’s a way of detaching from results.

CVC: You’ve had a really good result with Beyond Banksters – how has it been to explore this new area of book publishing?

Delores: It’s been great fun to take on a new challenge and succeed. I’m looking forward to finding our next manuscript. It’s like we’re just cutting our eyeteeth on it. Why not try it?

It’s interesting with books and print and the internet – why publish a book now? Except that apparently that particular book has motivated a lot of people to think about things and take action. And it’s a different kind of attention, when you’re reading print.

CVC: Where are you going next?

Delores: I’ll probably grow old and die. Maybe. After we publish another couple of books.