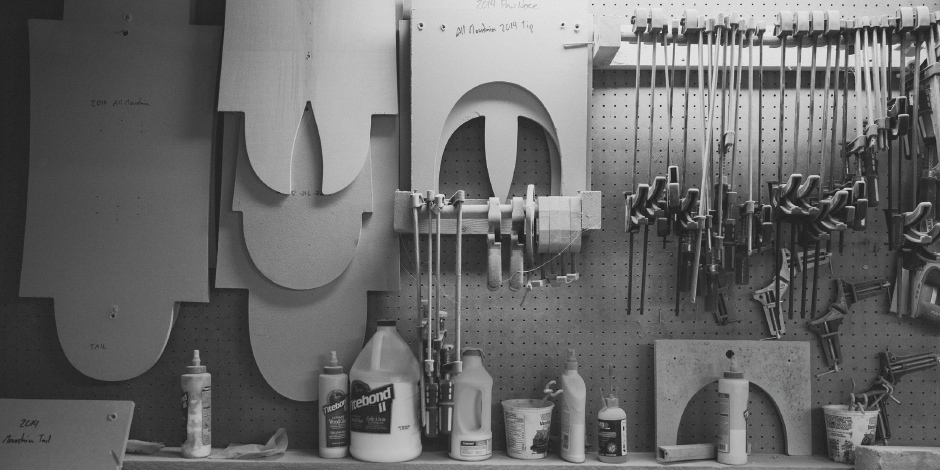 Three years ago I first laid eyes on a Kindred snowboard in a local sporting goods consignment store. The top sheet depicted a saw tooth mountain using wood veneer and taped to the board was a hand written story which described the locally made piece. At that time, I am told they had made less than 30 snowboards. Since then, Kindred has made more than 300 custom or limited edition snow boards for customers near and far including the United Kingdom, the Netherlands and Japan. The 2014/2015 season will also see them launching a new fat ski for their two planked kin.

This October I had the opportunity to spend an afternoon with Ange and Evan, the design and build team behind Kindred Snowboards. The rise of Kindred as a boutique snowboard fabricator is somewhat ‘serendipitous’ as Ange explains. Fueled by their love of snowboarding and a desire to fabricate their own board, she and Evan went searching for a snowboard press. Not 24 hours earlier one such press had been posted on Craigslist; the seller originally purchased the press from the now defunct Option Snowboards. To this day, Ange and Evan have yet to find another used press.

While Evan lays up a limited production board using a bio-based resin, I learn that he honed his skills as a snowboarder at Calgary’s Canada Olympic Park. Ange learned to ride at Hockley Valley in Ontario not 30 minutes from where I learned to ski. Through what seems like a fortuitous chain of events both of them ended up on Vancouver Island and in a short period of time developed a strong kinship with both the people and places of the Comox Valley. Both speak about the connection they have with everyone who has been a part of their journey. Kindred has given them a way to create ties with other like-minded folks who share their passion for the winter ride.

As I flip through a stack of top sheets ready for the press, I am reminded of what caught my eye 3 years ago; bold images of the local landscape graphically represented using various wood veneers and pieced together by hand. As with most modern day makers Ange has self-taught her craft. Yet, it’s evident that her background in film and design has lent itself to the age-old craft of marquetry and allowed her to create stunning, one of a kind artwork for every Kindred snowboard.

Traditionally, wood has always been the material of choice for the solid core of many skis and snowboards, yet there are very few manufacturers who produce their own. Twenty minutes up the road is Rainforest Sawmill, which provides the raw materials for Kindred’s solid wood cores. Locally harvested Douglas Fir and Yellow Cedar, chosen for both their durability and responsiveness, provide each snowboard with not only its unique ride characteristics but an organic link to our local geography. Most of the wood core is pressed between alternating layers of glass cloth and resin; the solid wood sidewalls are exposed for both strength and aesthetics. While describing the wood core construction process, Evan’s eyes light up as he shows me several pieces of rare yew wood that will be machined for sidewalls on future boards.

As I leave the Kindred property the smell of wood smoke permeates the air and I can see and hear the waves rolling against the rocks on the beach behind the shop. The scene seems so far removed from the giant factories we have become so accustomed to mass-producing skis and snowboards. Kindred is not just their brand. It’s a way of life for these two. I can’t help but root for these backyard makers who have so successfully combined old world techniques with new world technology. They are a part of a growing movement of grassroots innovators making their world a little bit smaller, one snowboard at a time. 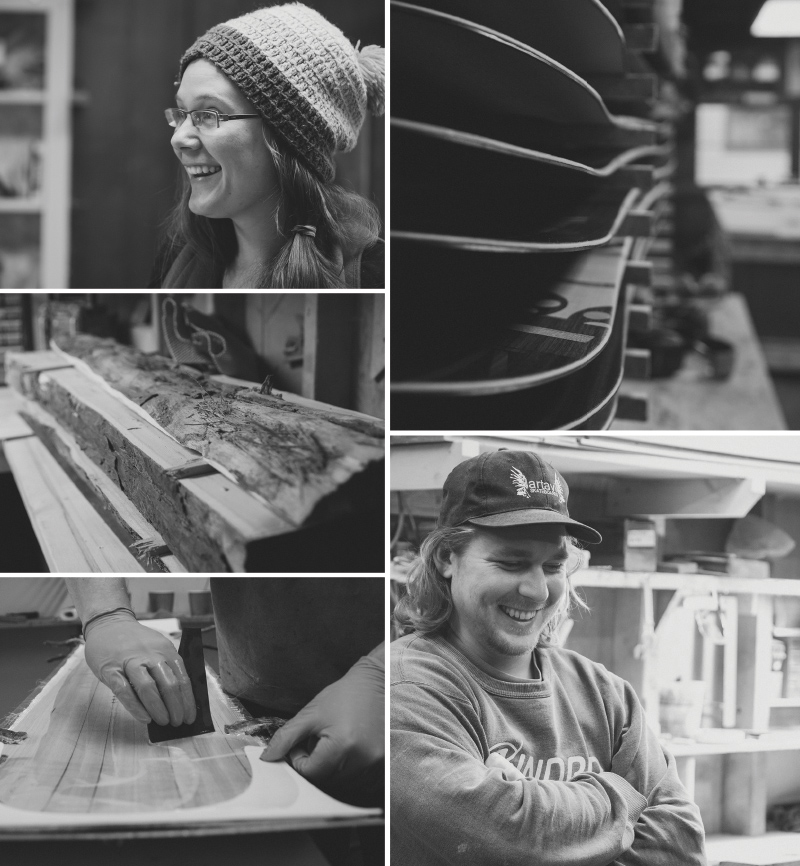