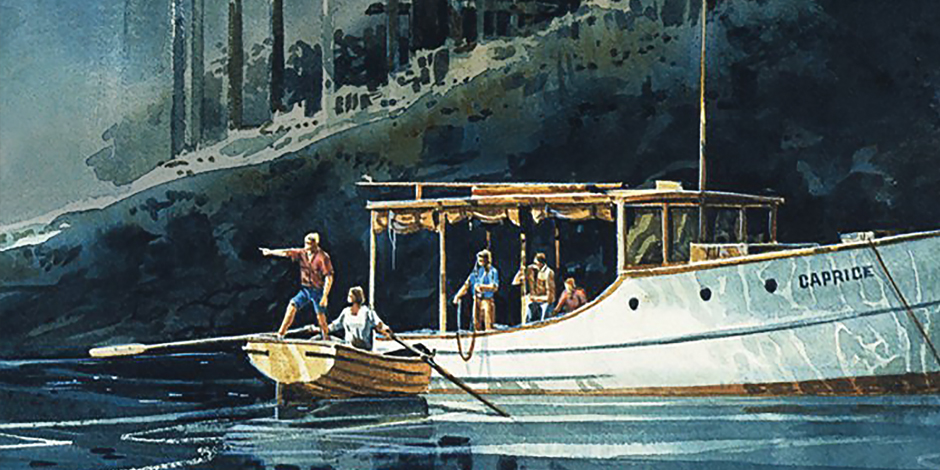 KUDOS FOR THE CURVE OF TIME

The classic story of a BC family’s sailing adventures still thrills modern readers.

I grew up in a house where bookshelves reached the ceilings, with cascading spider plants tucked in among the books. Somewhere near the cobwebbed top shelf, a battered copy of M. Wylie Blanchet’s book, The Curve of Time, held court over the other dusty paperbacks. I occasionally read the description on the back, but I never took the plunge.

In 2011, this classic BC book was re-released in hardcover to acknowledge the 50th anniversary of its publication. The book club I was part of at the time decided to read it, and we all LOVED it.

The Curve of Time has become an enduring favourite for its evocative language and colourful descriptions of the BC coast. This isn’t a chronological narrative (for example, the children’s ages are never mentioned); rather, it’s a series of warm reminiscences. Woven together throughout the book are accounts of black bear encounters, philosophy, wild weather, history lessons, engine failure, half-forgotten apple orchards, ghost stories, and the kindness of strangers.

Blanchet—nicknamed “Capi” after her boat, the Caprice—is our narrator, philosopher, and seemingly fearless leader, exploring and experiencing the Inside Passage between Vancouver Island and mainland BC, with her five children along as co-captains.

Throughout summer seasons of the 1920s and ’30s, Capi and her crew explored abandoned coves in Desolation Sound; sheltered in many harbours of the Gulf Islands, Discovery Islands, and beyond; navigated violent tides in Surge Narrows; made lifelong friends with quirky coastal loners; and had the kinds of adventures that most people can only dream about.

The book exudes the magic of summer on the coast—salty, a little sunburned, blackberry-stained fingers, barnacle-scraped shins. In one scene the family eats a fresh-caught salmon with their hands after cooking it over a fire on a deserted beach.

Our captain is not fearless, but she is honest and capable. She is curious, brave, and completely inspiring. She views her children similarly and trusts them to rise to any occasion.

Unspoken in the book is the collective grief for the missing husband/father who disappeared at sea, but rather than avoiding the thing that took him, the remaining Blanchets lean in close, cultivating resilience and an incredible bond.

Although the narrative wanders, the writing is clear and straightforward, and is beautifully descriptive without being overwrought.

The anniversary edition has new photos added, and a little more information about M. Wylie Blanchet, but the story is just as good if it comes off a dusty top shelf somewhere.

Copies of this non-fiction classic are available pretty much everywhere. Go visit your local used-book shop and I bet you’ll find one.

This is the astonishing adventure story of a woman who, left a widow in 1927, packed her five children onto a 25-foot boat and cruised the coastal waters of British Columbia, summer after summer.

Muriel Wylie Blanchet acted single-handedly as skipper, navigator, engineer, and, of course, mom, as she saw her crew through encounters with tides, fog, storms, rapids, cougars, and bears. She sharpened in her children a special interest in the rich traditions of the area’s First Nations communities and in nature itself. In this book, she left us with a sensitive and compelling account of their journeys.