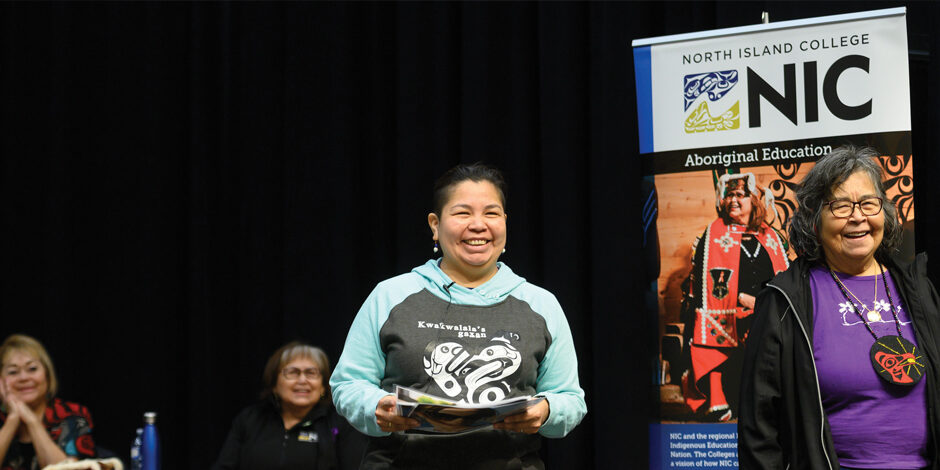 North Island College’s (NIC)’s Indigenous language courses are bringing together students and building a community of support for those interested in learning more about Kwak’wala language and culture.

Kwak’wala is one of two Indigenous languages taught at NIC,
Nuu-chah-nulth being the other. It began as a pilot project in Port Hardy and quickly grew to being offered across the College’s campuses in multiple dialects. Demand for the courses is high, with both Indigenous and non-Indigenous students exploring the language.

“I think there are different motivations as to why people learn the language, and I think that changes from when they first step into class to the next time they step into class in terms of how their awareness grows,” said NIC Kwak’wala instructor Carla Voyageur.

Voyageur co-teaches Kwak’wala in the Comox Valley with Keisha Everson. Both were first exposed to Kwak’wala when they were young through their grandmothers, who are fluent speakers. Both decided to delve further into the language after having children.

“When I had my daughter, I realized this was something I wanted to ensure was important for her,” said Voyageur. “By the time I had my second, I was coordinating immersion camps for the community and doing curriculum development projects.”

The pair came together to co-teach the Kwak’wala course, combining their teaching skills and expertise to create a unique classroom experience for their students.

“Keisha and I have similar approaches to teaching,” noted Voyageur. “We do a lot of hands-on things—partly because we taught kids, but also recognizing that people need to move. I think people who come into the class are expecting desks and notes and are surprised when we get them to put them away because we’re focused on listening skills. It’s a style that’s worked really well.”

The style of teaching also reflects the nature of Kwak’wala, which has a focus on oral traditions, rather than written. NIC’s Kwak’wala curriculum includes basic conversation, structure, and pronunciation with a focus on both listening and speaking. The courses also focus on the connection between the Kwak’wala language and culture.

“In Kwak’wala, the culture is embedded in the language,” noted Everson. “You can’t separate the two.”

It was the connection to culture that drew NIC student Rory Annett to the Kwak’wala courses.

“Learning to speak Kwak’wala has been something I wanted to do for a very long time,” he said. “For me, it’s really about finding a way to connect with the land and the area that I’m living in and understanding its culture.”

A key piece of including culture is the presence of Elders in Residence in each class. The Elders attend classes, advise on course content, and are available as a resource for students to ask questions. They also provide opportunities for students to hear Kwak’wala spoken in a conversational way.

Part of each class includes what instructors call Elder Talk, where the Elders will sit and have a conversation in Kwak’wala about a video or picture related to the content of the lesson.

“Even if students don’t catch every word, they’re hearing the language spoken in a natural, comfortable way,” said Everson. “Our students always say it’s their favourite part of the course. It wouldn’t be the same course without the Elders there,” she said.

The courses also provide opportunities for conversations about Indigenous history, the impacts of colonization, and the work of language revitalization, especially in the last 20 years.

“It’s important to put how fortunate we are in perspective,” said Everson. “It wasn’t that long ago that it was illegal to speak an Indigenous language in a school setting—now we’re teaching it at a college.”

Creating space for those conversations helps to build connections and community among the students, who come from a wide range of backgrounds.

“We have such a broad range of students geographically now because of our online COVID delivery. It’s been really interesting to watch things grow,” said Voyageur.

The language courses transitioned to digital delivery last year due to the COVID-19 pandemic. Students from across the Island and Lower Mainland came together in one class, helping to create an online community, which is important for language learning.

“I feel like when we have that sense of community, we’re able to hold each other up and also support each other when the going gets tough, because language work is hard work,” said Voyageur.

Along with building an online community, the use of technology also provided benefits for students during class time, as Everson explained: “When you’re in a classroom, you get everyone to do a sample of the phrase and then you move on, but online, the student can turn off their mic and repeat the language as much as they want as they’re hearing it, so there are more opportunities to practice out loud during class.”

COVID-19 also forced Everson and Voyageur to adapt other language revitalization projects and created space for the development of new initiatives to share language more broadly.

“I had an idea for a word-of-the-day project—COVID provided an opportunity to manifest that into action,” said Voyageur. “I saw how much time I was spending on social media, so we created a Facebook page with a word or phrase of the day. We post four to five times per week. Hopefully it reaches someone and inspires them to learn about their language, but it also provides a forum to connect with others, ask questions, and delve into the nuances of the language.”

Everson and Voyageur are seeing how language builds community through the experiences of their students.

“I had one student who was attending a function and there was someone he wanted to talk to, and he said ‘Gilakas’la’ and the person responded ‘Gilakas’la’… and neither of them was Indigenous,” said Voyageur. “I thought that was amazing that it has trickled out into the community where people are including it in their day-to-day… which then starts the conversation of: ‘Where did you learn that? I want to learn.’”

Kwak’wala courses will be running online again this fall, and open to students from across the region and beyond. Both Everson and Voyageur are looking forward to meeting the next group of students.

“I really enjoy teaching people who are excited to be there and excited to learn,” said Everson. “I appreciate their enthusiasm and the reconciliation that happens in this kind of mixed-ancestry classroom that we have.” 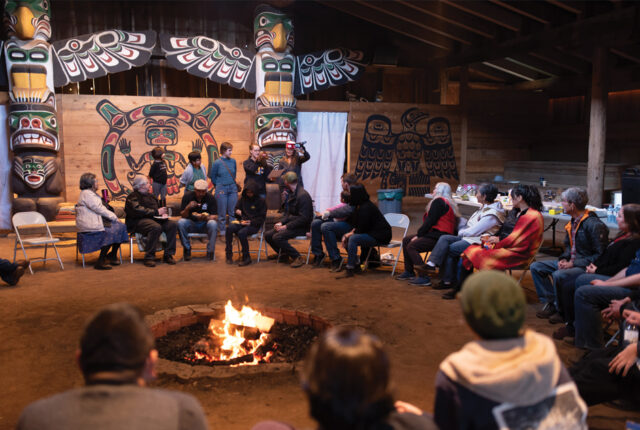