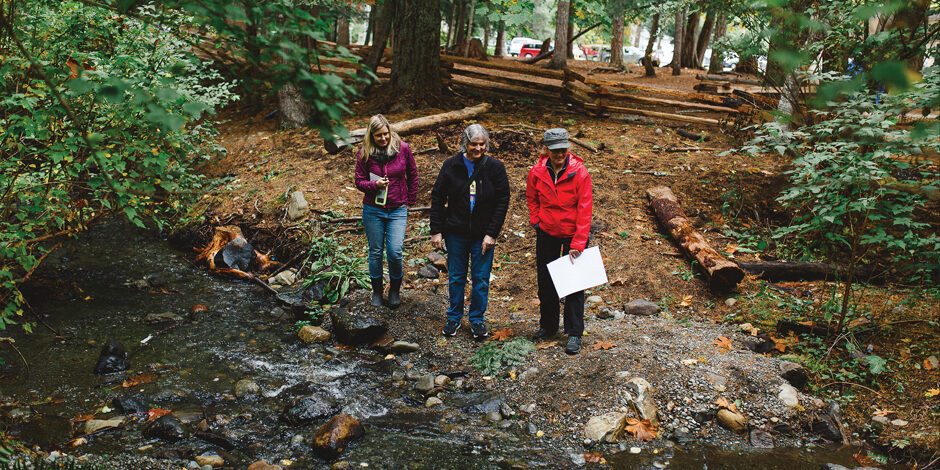 Streamkeepers keep a watchful eye on the Valley’s precious waterways.

In case you haven’t noticed, the Comox Valley has been experiencing a population boom of late. Newcomers choose the Valley for all kinds of reasons like being closer to nature, living in a gentler climate, and enjoying a slower pace of life. As people settle in, they often find that the small-town nature of the place helps them build meaningful community connections. That was certainly the case for my family when we moved here a decade ago. We quickly became involved, finding rewarding ways to participate in the community while meeting like-minded people.

Through my experiences as a biologist and a volunteer Streamkeeper, I’ve come to appreciate the Valley’s strong culture of conservation, which, like other important sectors like community health and the arts, is built on an impressive and dedicated array of volunteers.

Waterways such as the Puntledge and Tsolum rivers, Millard and Brooklyn creeks, and the Oyster River define our region. Despite the damage caused by development, agriculture, and logging, most Valley streams still support salmon runs. The opportunity to protect and restore local salmon habitat is one reason volunteer Streamkeepers are so drawn to help.

Jan Gemmell, a long-time volunteer for the Morrison Creek Streamkeepers, began to learn about the Morrison salmon runs and their habitats after she moved into a neighbourhood near the creek. In the decades since, she and her husband have become local experts. Besides supporting four species of salmon and two species of trout, the creek is home to a unique species of lamprey—an ancient, mostly parasitic fish—that exists nowhere else.

Morrison Creek flows into the Puntledge River at Puntledge Park; Jan met me there on a sunny October afternoon. She’d just finished guiding a tour for two Grade 3 classes where she showed them this year’s abundant pink salmon run.

Jan finds the life in the creek endlessly fascinating, and she marvels at this special wild place in the middle of a growing community. She says, “When the kids come here, they can be distracted by their friends, but once they catch sight of a salmon, they are so excited. It’s one of the things that keeps me going.”

Jan also engages with the adult community, including during a recent project on a tributary, Arden Creek. “We had volunteers helping us trap and move fish out of the part of the stream channel that was going to get re-shaped later in the summer. They loved seeing all the life—the crayfish, the different species of sculpins, the coho juveniles, and the cutthroat trout.”

Jan was looking forward next to working with a class from École Puntledge Park Elementary, who will help plant trees on the newly restored creek banks.

While Jan still has a day job, many of her Streamkeeper colleagues are retired. Indeed, one of the strengths of the Valley is the newly retired folks who have time, enthusiasm, and a lifetime of skills to contribute.

For Helmuth Novak, who retired here from Germany in 2018, volunteering with the Millard-Piercy Watershed Stewards was “a perfect match.” Streamkeeping has given him the opportunity to meet new and interesting people, give back to nature, and learn a whole new way of seeing the world. It’s a big part of his life now. He says his eyes have been opened to the amount of work to be done and all that volunteer groups can accomplish.

According to Erin, “the Valley’s volunteers are the eyes and ears on the ground. When a pollution spill happens, they are the ones who let authorities know. When developments are proposed, they identify the important natural features that should be preserved.” Erin thinks that without the diligence of the Streamkeepers and other conservation groups, more of our natural heritage would have been lost to development by now.

For many volunteers, connecting with each other on a personal level is another key piece that makes the journey worthwhile. Helmuth Novak agrees. His enthusiasm is palpable as he shares one of his key takeaways from his time as a Streamkeeper: “Water is the source of everything, and everything is connected!”

As I can personally attest, volunteering as a Streamkeeper is a meaningful way to contribute to the wellbeing of our land and water. While the conservation aspects of the work can feel urgent and overwhelming, rewards come from the time spent in nature, and from being part of a collective effort to make things better. 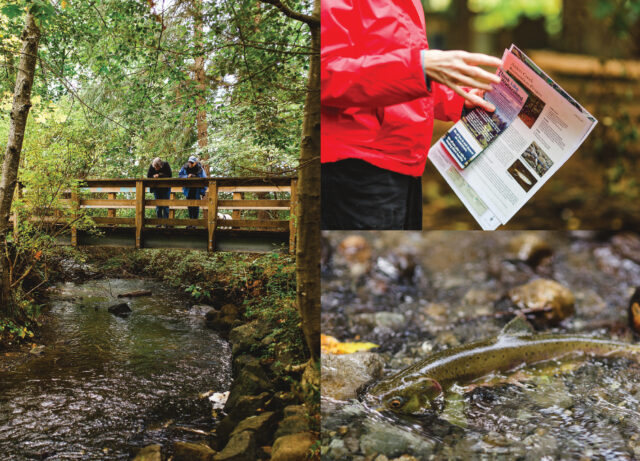