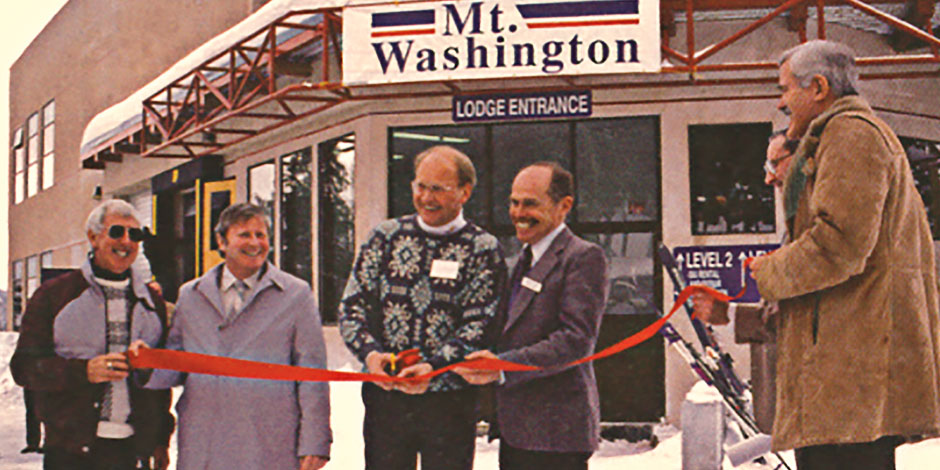 The resort heads into its fifth decade with plans for many more bluebird days ahead.

A quick Google search on turning 40 will tell you everything from “You’re on the brink of a mid-life crisis” to “Follow your passions, as your best years are yet to come!”

In the case of Mount Washington, I’d like to think the latter applies. That’s not to discount the last four decades, of course: since its opening day in 1979, Mount Washington has been a prime source of memories for Vancouver Island’s skiers and snowboarders.

The resort began in 1975 as a vision in the imaginations of founders Alex Linton and Henry Norie. As the story goes, Alex—an avid skier and local businessmen from Campbell River—had enjoyed a perfect bluebird day of skiing at Forbidden Plateau. On his way home, he marvelled at the peak in the distance. Not only was it significantly higher than Forbidden, but the sheer amount of snow it held impressed, and also intrigued, Linton. He was surprised that no one had considered a ski area in that location.

He reached out to his friend Henry, who had a helicopter, and the two embarked on an inaugural flight over Mount Washington. They gazed in awe at the mountain’s impressive vertical, numerous backcountry bowls, and heaps and heaps of snow.

Sixteen months later, they sealed a deal to purchase the land from the forestry company Crown Zellerbach. Mountain resort planning company Ecosign was hired to master-plan the resort, from lifts to lodges to runs. The first staff were hired and construction began in 1977 with run clearing and lift construction.

Mount Washington, like Whistler Blackcomb, was one of the first master-planned resorts for the province of British Columbia.

Iconic Comox Valley figures such as Peter Gibson and Ed Schum helped clear runs and prepare the resort for operations. I recently learned from Ed that in addition to being an engineer on the lifts at Mount Washington, he was also one of the lead engineers on projects such as Whistler’s gondola in the ’70s. Peter went on to run various operations including the ski school, the rental shop, and marketing; he eventually became GM. Peter’s retirement at the end of the 2017-2018 ski season brought an end to an extraordinary 40-year career in the ski business, as well as a number of memories about the resort.

Early trail maps show a few chairlifts, 16 runs, a handful of small chalets, and a lodge that even had flush toilets! Yes, flush toilets were a big thing in those days, as no other ski hill on the Island had them.

In the late 1980s, the resort changed hands and George Stuart from Campbell River became the principal shareholder and chairman of the board. George had been involved with the resort’s infrastructure projects from the early days, and as he watched his “baby” grow, he saw even more potential.

George and his team transformed the hill by adding terrain and lifts with the addition of the Sunrise and Boomerang chairs. They upgraded the old blue double chair and red triple chair to modern high-speed detachable lifts, now called Eagle and Hawk respectively. His group also added night skiing, the Raven Lodge for Nordic skiing, and the Bradley Building (home to the rental shop and the ski school).

In the late 1990s, the addition of the Inland Island Highway made day tripping more feasible, and in the early 2000s, after WestJet began flying here and the Comox Airport was upgraded, air access to the resort was now a possibility.

It’s not easy to be a ski resort on an island in the Pacific. Lean snow years and the occasional unusually warm winter have presented challenges at times, giving Mount Washington a reputation as a bit of a diamond in the rough before the resort moved into its next generation of ownership with Pacific Group Resorts in 2015.

The company embarked on a mission to bring summer to life at Mount Washington. The bike park was reintroduced, conferences and weddings became a focus for the F&B team, and the Eagle’s Flight Zipline was completed in 2019 and quickly became a major North Island tourism draw.

At the close of the 2018-2019 season, longtime operations staffers like Buck Briggs and George Trousdell closed out their decades-long careers to move into a full-time recreation lifestyle. This has created opportunities for new legends like Big Poppa to emerge, along with others who’ve already put in 15 to 20 years on the mountain. One legend from the earliest days remains: Dave Paige (bottom right, below photo), who got his start as a groomer at Forbidden Plateau in the 1970s before moving to Mount Washington. We have been lucky to have him laying down cord since 1979.

As Mount Washington joins the 40+ crowd in 2019-2020, here’s to abundant powder days in winter, tacky dirt in the bike park, and many more years of memories to come. 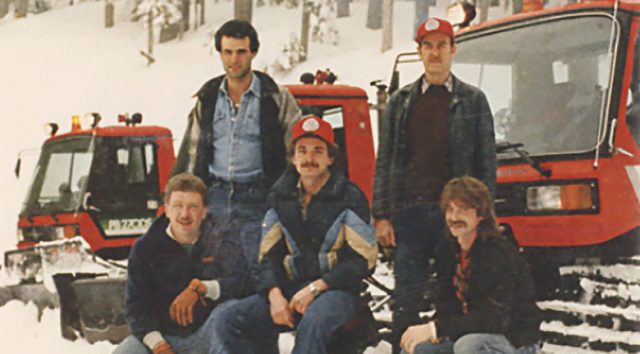