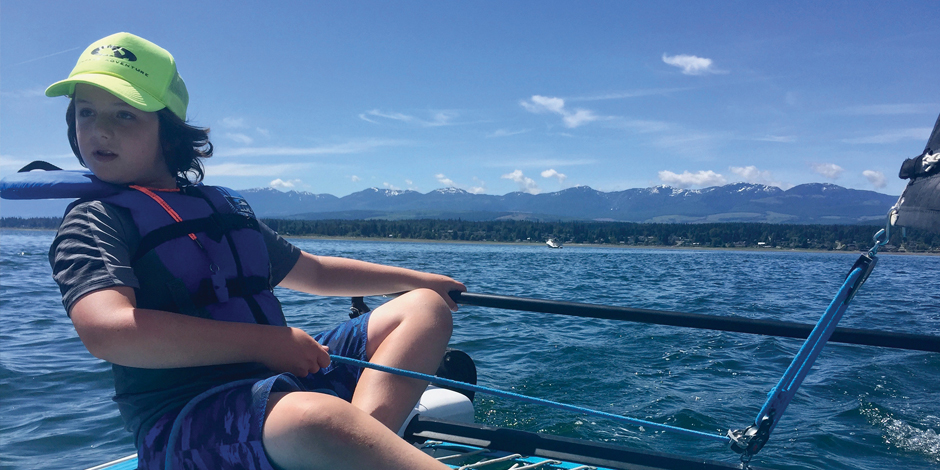 Our young residents reflect on the home they’re growing up in.

My name is Sam and I am 11 years old. I love to go fishing, play basketball and ride bikes, but my very favourite activity is sailing.

Growing up in Comox meant daily walks to the marina for my mom and me when I was little. I think that’s where my love for sailboats (and later sailing) came from. Our neighbours, Lois and Derrick, have a sailboat, and I have been sailing with them twice, once to Powell River and the other time to Ford’s Cove on Hornby Island.

Mom tells the story that I was just three years old when I first asked for a sailboat. She thought I meant a toy, but I wanted a real one.

From that point on, Mom encouraged me to start saving. I’m still saving, but I know I will reach my goal of owning a sailboat one day.

When I was six I took an Optimist Wet Feet summer course, and the following summer I did the Optimist Beginner course. Both were with the Comox Bay Sailing Club. The Optimist is a small, single-handed sailing dinghy, great for beginners.

We sail Hobie Waves, which are small catamarans with a hull length of 13 feet and just one sail. You can sail a Wave singlehanded, but we mostly sail with two or three people aboard. We have great coaches, Andy and Stu, who own Compass Adventure. Both of them have raced catamarans to World Championship level.

Learning about competitive racing is really fun. There are rules to learn, strategies about which line to take, and most importantly you have to work as a team. If the wind is on your side you go really fast, which is very exciting. I’ve learned how to be safe on the water, but controlled capsizing sure can be fun, too. The season ends with Sailfest, where we get to race each other in the Comox Harbour with lots of spectators on the pier.

By the end of my first year in the Academy, when I was 10 years old, my confidence had grown so much that I asked if I could take my mom out sailing for her birthday. Stu said yes. I felt proud that he believed in my skill level and me.

Mom thought I was taking her kayaking, but I had rented a Wave for two hours. Mom had never been on a Wave before, but she put all her trust in me as we set sail across the bay over to Royston Wrecks, then to Little Mexico, where we sat on the beach and had birthday cake. We then sailed back to the marina.

Mom said it was the best surprise she had ever had, which made my day.

I think sailing is my favourite way to be close to nature. Sometimes it’s peaceful and you can catch sight of an eagle soaring high in the sky or listen to the crash of the waves and feel the spray on your face as you skim across the water. Both are amazing feelings.

Learning to sail is something I see myself doing all my life. If you have the chance, give it a try. I hope you like it as much as I do.