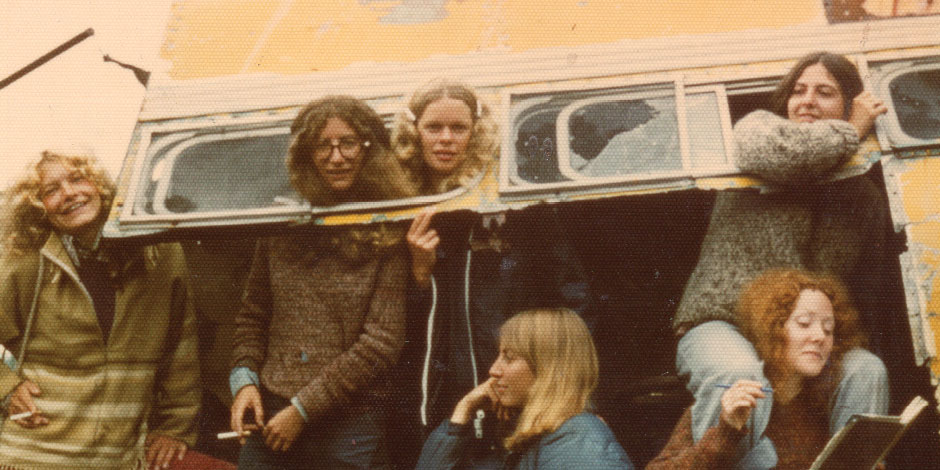 LONG MAY YOU RUN

Dancing In Gumboots is an intimate portrait of a bygone era on the coast, telling the tales of bold and inventive women arriving to the Valley in the ’60s and ’70s.

Jane Wilde and Monika Terfloth are waiting for me at a patio on 5th Street. Not far from here, Terfloth once stocked shelves at a discount store upon arrival to the Comox Valley in 1973. Wilde flips through a copy of Caitlin Press’s cult-hit book Gumboot Girls: Adventure, Love & Survival on British Columbia’s North Coast, showing me a photo of a row of seated women taken in Prince Rupert in 1977. A beaming Terfloth sits in the middle.

Wilde enlisted Terfloth and her friend Sally Gellard to help facilitate a sister book to the original, entitled Dancing in Gumboots. It was only afterward that Wilde, who created and compiled both books, spotted Terfloth’s appearance in the original, taken during a trip North to visit Terfloth and Wilde’s mutual friend. “These women are working in the fish plants, they’re going out dancing, they’re sitting on the breakwater with their gumboots on, and they still have herring scales on their boots,” laughs Wilde. “It was always my favourite picture in the book.”

While Gumboot Girls (which contains a story from Wilde about moving west from Ontario) focused on the area between Haida Gwaii and Prince Rupert, Dancing in Gumboots is specific to the Comox Valley. Though the location where the two women first landed differs, their motivation for leaving home was the same.

“In Saskatchewan,” says Terfloth, “if you were five years older than me at the time, you got married to your high school boyfriend, and you were often pregnant at the time. There was no birth control, or it was hard to get. You went to secretarial school or you became a nurse or a teacher. The revolution of the 60s, the music, the anti-Vietnam War movement as we were going through high school, it all started to change us. So we looked around and said, ‘This isn’t what I want, and this isn’t where I want to be.’ We wanted to explore, and at the time it was possible.” Wilde agrees. “Thousands of people were doing it.”

The women describe an exotic mecca drawing them West, away from the stifling security of their families. A roaring ocean with a temperate climate, fresh air, fresh seafood, and fresh fruit, and a rugged environment they could test their youthful energy and fortitude against. They acknowledge that not everyone had the same positive experiences they did, and many stories in the book are bittersweet. But when I ask if remote British Columbia was everything they expected it to be, they respond in near unison that it was even better.

“I couldn’t believe how lucky I was to be there,” Wilde says of Haida Gwaii. A childhood friend of hers was building a sailboat there, and enticed her with stories of adventure and a newfound community. Upon arrival she met a crew of educated, well-travelled American women who took her under their wing. “Those years were so good and so positive for me,” says Wilde. Terfloth nods, saying she never considered going back to Saskatchewan again.

There are marked differences between the two compilations, and Dancing in Gumboots has a distinctly local flavour. Editor Lou Allison noted a consistent theme throughout, with vehicles factoring heavily into the contributions with an air of nostalgia. “I arrived in an old beat up truck… I arrived in an old beat up Volkswagen Van…” Wilde laughs. Terfloth herself arrived in a golden-tan home delivery milk truck that had a single driver seat for her boyfriend (now husband, Randy). She and a friend set up collapsible lawn chairs in the back, leaving the sliding door open to add exhilaration to the road’s curves. It still smelled faintly of sour milk.

Wilde and Terfloth describe a thirst for knowledge that wasn’t previously available to them, sharing and devouring books like Spiritual Midwifery and Our Bodies, Ourselves —“Our Bibles,” says Wilde. They both recall a sense of liberating capability, with people building the rafters of houses or installing electrical wiring with only instructions in a manual to guide them.

Wilde, who has relocated to the Comox Valley herself, says that only 11 of the 35 contributors to Gumboot Girls still reside in the North, while 29 of the 32 women who contributed to Dancing in Gumboots still call the Comox Valley home. They note that many women in the latter category stayed here to make significant contributions to the Valley that are still evident today, through community development, activism, environmental enrichment, and political involvement.

Both Gumboot Girls and Dancing in Gumboots are unique in the publishing world, as the stories weren’t traditionally curated. Instead, they used the first 35 stories they received, and edited them with a restrained hand to maintain each individual’s voice and personal nuances. The result is a refreshing, inclusive, and meaningful picture of an era in the Valley’s history when the ideal community these women envisioned felt within their reach, and they had the determination and resilience to achieve it.

The book contains firsthand accounts of questioning sexual stereotypes and gender roles, major life changes, and deaths in the family. As Roberta De Doming, who moved from New York City to Denman Island in 1970, writes in Dancing In Gumboots: “How textured and colourful are the threads that others have woven and continue to weave into my tapestry. The wonder of being here at all, as one by one we age and take our leave, as friends and life partners pass away. Inevitably roads diverge, choices are made. We bid our goodbyes to the ‘woulda shoulda couldas,’ those roads not taken, and then we must say goodbye to each other and the sheer magnificence of it all.”

I ask the women, both with a background in nursing, what they learned through the process of compiling such personal stories. “I think it’s an appreciation for the sisterhood that extends beyond my immediate group of friends,” Wilde says, with Terfloth nodding in agreement. “Those women’s friendships and how important they are to life on the planet.” 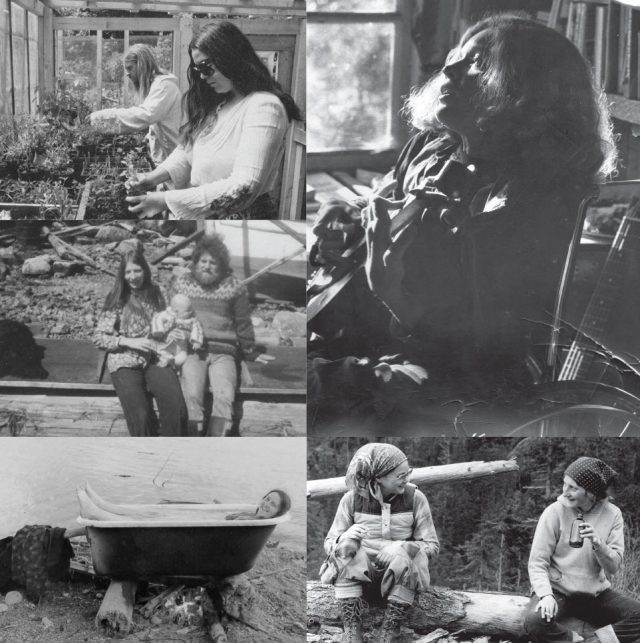