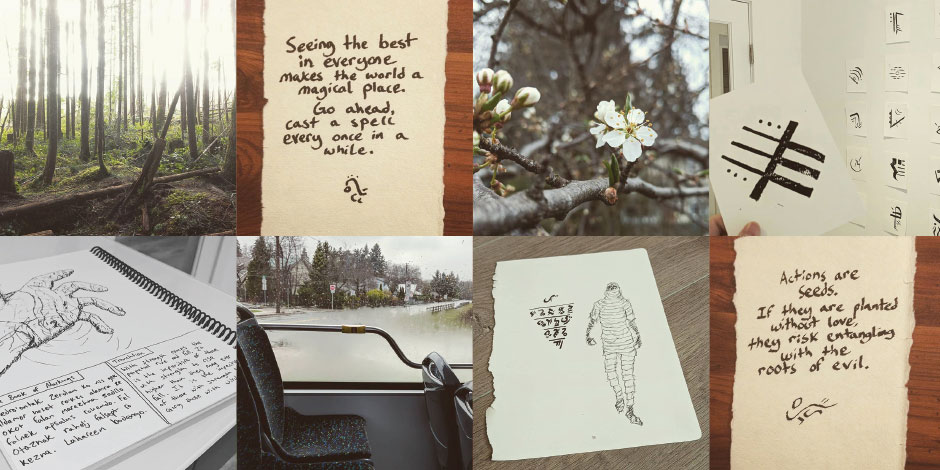 MARKINGS OF THE MIND

A designer and artist utilizes his craft to break down the barriers of schizophrenia.

These hallucinations started when he was a kid. He would hear voices while sitting in a room alone—sounds that weren’t quite English, so he called it the “gibberish language.” Seeing things came next. When he stared at a flat surface, strange combinations of lines, strokes, squiggles, and bumps appeared.

Now 31, McKenzie is a diagnosed schizophrenic. He still gets hallucinations, but he’s learning to harness them into something beautiful, positive, and inspiring. And yeah, a little mysterious and strange. After hanging out with him for an hour, I came away convinced that McKenzie doesn’t let his mental health, or anything else, define him.

“The illness has shaped my reality for so long,” he says. “Now I’m taking the hallucinations and using them to shape my reality. It’s therapeutic.”

I meet McKenzie—thin frame, neatly dressed, beard, mop of brown hair, and glasses—in his office in downtown Courtenay. It’s the headquarters for Objektiv Digital, where he designs apps, websites, and other digital projects as a contractor. He’s at his standing desk when I arrive. On the wall of the organized room are prints from the Curious Markings Co., a personal project he started a couple of years ago with roots extending back to the beginning of his mental illness.

His dad was probably schizophrenic, too. An alcoholic, he died when McKenzie was young. The younger McKenzie’s first signs of the illness appeared when he was around 10. From there, his mental health oscillated between functional member of society to regular psychotic episodes. He struggled at school and to hold down jobs. Living a normal life was difficult. Video games were his escape, and where he was able to make friends. When his life fell apart, as it did many times, his mom was always there to help him get back up. Working with a low-carb diet, exercise, and medication, he eventually found a sustainable rhythm. In 2016 he signed up for North Island College’s Web and Mobile Application Development diploma program.

The hallucinations were still returning occasionally. He’d always drawn what he saw, but it wasn’t until 2017 that he started interpreting them. While sketching he’d listen to the gibberish in his head and write it down phonetically. Then he’d wait for an English word to pop into his mind. This would become the meaning of the symbol or marking.

When he saw a circle with dots and arcs inside, he heard “oshlaseem,” and interpreted it to mean “growth.” “Warning” looked like a rough drawing of a crocodile jaw snatching bananas from the sky. It sounds like “azhlakhar.” Every symbol looks different, but they share an abstract simplicity that brings to mind cave art, calligraphy, and pen drawings. Alien hieroglyphics. They’re elegant and beautiful.

As his library of markings and meanings grew, McKenzie was inspired to combine them with his digital skills. He built the Curious Markings website where he posted some of the markings and the interpretations. For a school project he designed an accompanying app that “hid” virtual markings all over the world, similar to Pokemon Go.

After graduating from NIC he started Objektiv Digital, and his entrepreneurial spirit kicked in. When he wasn’t building websites and digital ad campaigns for clients he printed markings on T-shirts and started selling them on his website. He made a book that combined the markings with writing and poetry. They were inspiration for “magic spells.” And for a while he charged a small fee to turn Instagram profile pictures into custom markings.

This is where McKenzie’s relationship with his hallucinations and their interpretations gets complicated. Drawing his visions is hard on his mental health, so he doesn’t like to do it too much. And he’s conscious that profiting from his markings suggests they are something to be taken literally.

“At best, they are purely pseudoscience,” he stresses. “I never want to be seen as a snake oil salesman.” But they do help him, and he thinks they might help others.

“The markings are a way of directing my thoughts towards something concrete,” he says. In a crowd of people he sometimes gets paranoid. To calm down he thinks about the “brotherhood” and “community” markings to help him feel safe and supported.

More than anything, all the different projects work as a bridge between his mind and the rest of his environment. The markings and their meanings help him function in this world, and they help assign order to schizophrenia in a society that often misunderstands mental illness. By being open and honest about his struggles, he’s taking something scary and creating something curious, making something of his own illness in a way that connects him with others. In this way, he’s taken what once held him back and harnessed it into a super power.