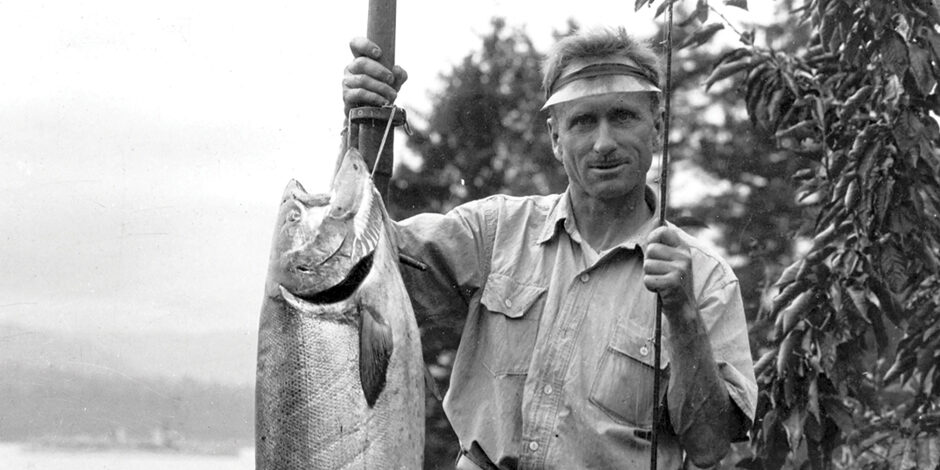 Get to know Comox’s most famous nature nerd, and the park where he used to live.

There’s a pretty little parcel of land not far from downtown Comox called Mack Laing Park. Named for a man who lived here for close to 60 years, this property has been the subject of controversy since 2013.

But this isn’t a story about controversy. It’s a brief introduction to the man himself, and the place he chose to live.

Who was Mack Laing, and how did his name get attached to such a gorgeous piece of land?

Born in Ontario in 1883, he was 39 years old when he arrived in Comox in the summer of 1922. In his younger years, he was a guy with insatiable energy, a deep knowledge of nature, and a desire to share his experiences with a wide audience.

After spending years as a teacher and school principal in Manitoba, where he grew up, then completing an art degree in Brooklyn, New York, he crafted a strong personal brand as a nature writer. A keen hunter and a crack shot, he was also an engaging writer. He published his first book in 1913 and began making a pretty good living selling his travel and adventure chronicles to nature- and outdoor-oriented magazines.

He wrote a book about his six-week motorcycle road trip from New York to Oregon via San Francisco in the summer of 1915. It didn’t get published until decades later, surprising since it was an epic adventure—he rode an 11-horsepower Harley Davidson nicknamed Barking Betsy, slept rough, and immersed himself in nature—at a time when there really were no decent roads across the continent.

By 1922, he’d gained both public recognition and burgeoning scientific credibility as a naturalist. He parlayed these into a career as a museum collector and expedition ornithologist. This dream that allowed him to travel and explore wild places, cataloguing and often collecting specimens of fauna and flora for institutions like the National Museum of Canada and the Smithsonian, as well as private collectors.

It was a field expedition for the National Museum of Canada that brought Mack to Comox. While he was here, he fell in love with a particularly lovely part of the shoreline with a magnificent view of the bay and glacier. He purchased five acres, and the next year he cleared some trees and built himself an Aladdin Readi-Cut kit home (Laing’s biographer, Richard Mackie, says Mack paid farmer Leo Anderton $750 for the land, and the house kit was $710).

Mack got engaged to his long-distance love, Ethel May Hart, in 1922, but she didn’t come to Comox until they married in 1927. In the meantime, he participated in some amazing expeditions, including a marine voyage to Japan by way of Alaska in 1924-25, and the first ascent of Canada’s highest peak, Mount Logan, in the summer of 1925. He didn’t summit, but he collected specimens and made a film about the trip.

Mack and Ethel were both outdoorsy, hard-working, practical people. They turned the property into Baybrook Nut Farm after Mack cleared several more acres of forest—sometimes using gunpowder—to plant fruit and nut trees, along with a large market garden.

They never had children, so when Ethel died of cancer quite suddenly in 1944, Mack was left alone at the age of 61. He sold the nut farm and property to the Stubbs family in 1949, and the next year he built his next home, Shakesides, on an adjacent piece of land with the same panoramic view. Ever the go-getter, and thrifty to boot, he re-used the blueprint from his first house and split the cedar shakes himself.

He would live here for the next 30 years, until his death in February 1982. He watched birds, wrote every day, stayed connected to friends and colleagues, continued to marvel at the world and his place in it. (He also shot a lot of birds that he deemed predators, like crows and robins. He was a complex guy.)

In 1973, he willed his house and land to the Town of Comox on the condition that he could live there for the rest of his life, and that after his death it would be preserved as a “public nature park, for recreation and conservation purposes.” Things went wrong with the legacy over the years—it’s a long story. Currently, two non-profit groups who cherish Mack Laing have strong and somewhat opposing feelings about how to honour his memory, and what should happen with the property.

I can’t help but wonder what Mack would think of the state of his property today: Baybrook was demolished in 2015 and, at the time of writing, Shakesides is in considerable disrepair. But the park is a beautiful, thriving, and largely natural space. Pathways wind under towering second-growth trees; Brooklyn Creek flows fast and clear; and the combination of beach, bay, and mountains is breathtaking. I’d like to think that it would make Mack happy to know that people enjoy his former home every single day.

If you haven’t been here, you should visit. Walk the paths, admire the views, think of Mack, and recall the ancestors of the people of the K’ómoks First Nation, who lived here and cared for the land and sea long before Mack Laing arrived.

You’ll feel it in your soul: this place has always been special, and so it should remain.