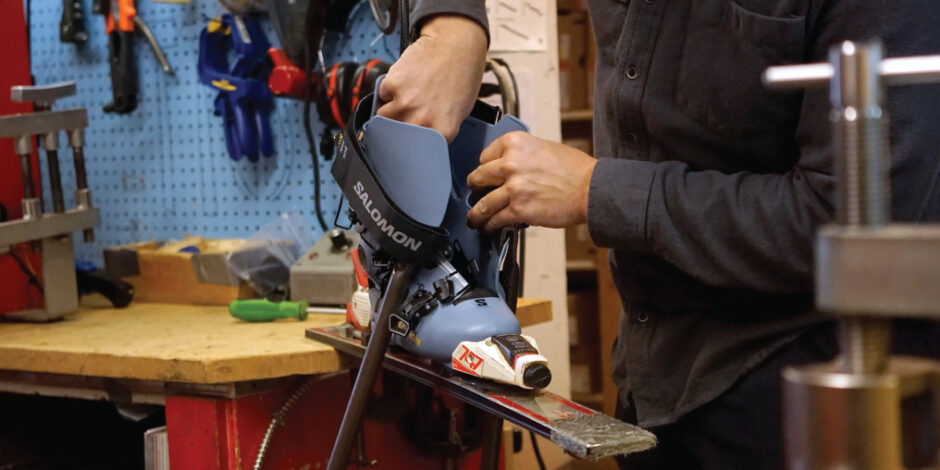 When you’ve got happy feet, you just ski better.

Not many people know this about me, but I’ve got a real penchant for fine, stiff Italian boots. This confession may provoke some strange mental images, but rest assured, I’m only talking about skiing.

Many of us are seasoned enough to remember when going to the ski hill meant hours of gruelling, cold imprisonment in icy-blue Lange racing boots that gripped our feet until our toes turned into hooves. Maybe snowboarding was invented simply out of a burning desire for more comfortable footwear.

Well, fret not, my winter aficionados. It doesn’t have to be like that anymore; at least, not if you take a little bit of time and seek out The Boot Fitter. In an era of fast fulfillment and false online promises, he is someone who truly pursues his métier with passion. His name is Josh and he works at Ski Tak Hut.

When I recently made my annual visit for new ski boots, Josh informed me it had actually been about five years since I’d last consulted him. This means I’d had 250 days of skiing and probably 200 nights of dancing in them. (Yes, he possesses the ability to make ski boots so comfortable you can table-dance in them. Mind you, so too does beer.)

Now Josh—or any good boot fitter, for that matter—knows feet. When pressed upon whether this knowledge betrays some deeper underlying fetish, he frowned under his moustache and spoke merely of his distaste for sub-par skiing and unrealized potential.

Among his numerous other pet peeves are folks who purchase an item online that is far too big or small, or ill-suited to their skiing style, and then expect him to perform an act of God in order to make it work.

Then he unveiled the modern skier’s footwear choices. If you’re going to ski purely in-bounds at a resort, you’ll probably choose regular alpine boots designed for alpine bindings. If you enjoy uphill suffering, you’ll want to set your budget slightly higher and consider touring boots. These offer a wider range of motion in walk mode, have a beefy sole, and are typically a bit less stiff. They also accommodate traditional bindings, technical pin-bindings, or both. Most boots come with moldable liners, although you can scrap those and buy really fancy ones if money is no object. (Although for most ski bums, the idea of money is a distant fantasy).

Given the big lines that Josh has seen me tackle, I was confident that he’d make the right choice for my slender foot, as well as the aggressiveness I seek to convey in my skiing to what I imagine are many distant admirers.

Josh measured my foot in several different ways, then directed me to put it into the outer plastic shell of the boot I’d selected while he brought out the “magic sticks” to see what size would be most appropriate. (It may be a trade secret, but if you see the magic sticks come out, you know you’re on your way to good-fit nirvana.)

Then came the “custom” part: the liners were heated up in a Dr. Seussian-tubey-machine, then put into the boots, where I stood, cozily, while the liners molded to my feet as they cooled. I highly recommend the custom footbeds that correct any posture issues (within reason). The boots’ outer shell can also be heated and “punched” or expanded in areas that feel too constrictive, although Josh recommends skiing in the boots a few times before making that call.

In the last five years, technology has ratcheted up a notch and boot fittings are remarkably less dramatic than in the past. Huge strides (forgive the pun) have also been made in weight and comfort. Nowadays, boots can feel more dynamic and less like stone blocks between you and your skis.

As Josh poked and prodded my feet, I learned that there is no such thing as feet too grotesque to fit, just challenging personalities. Also, courtesy begs you not to arrive for a fitting without proper foot hygiene. Some talcum, maybe a nail trim—hell, go for a whole pedicure if you really want service.

I know some folks who will never give up their rear-entry racing boots; they’ll ride those monstrosities all the way to the bar. But if you want to be happier, ski better, and feel lighter in your wallet, a custom boot fit is the way to go. Going cheap is never cheap, especially when you’re relying on a pair of boots to keep you in control as you’re flying down a mountainside. And, in the day and age of online shopping, wouldn’t you rather have a proper fitting from a friendly fellow who doesn’t want you skiing terribly in bad boots?

See you when the snow flies!