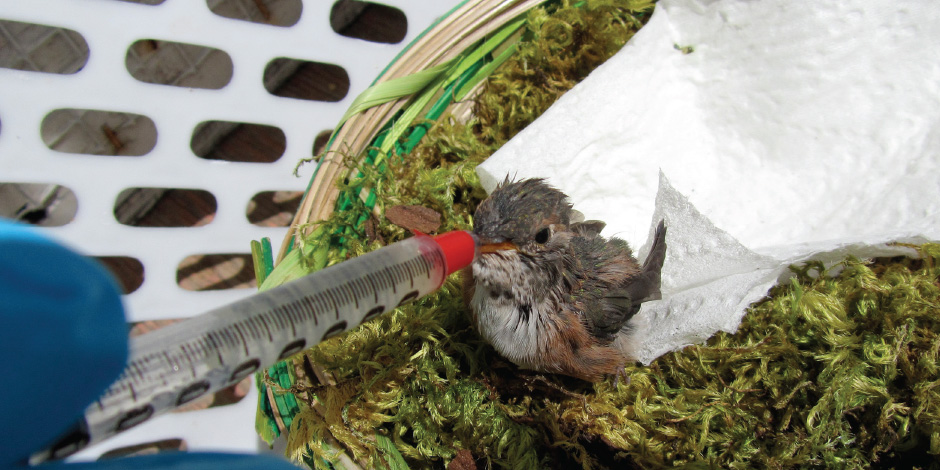 Mountainaire Avian Rescue Society (MARS) is a wildlife rescue and rehabilitation centre where over 700 injured and orphaned wildlife in the Comox Valley are treated and released back to the wild every year. The new MARS wildlife hospital opened in May, just in time for baby season. Wildlife rehabilitation volunteers (rehabbers) will have 2,000 sq ft of new purpose-built space. A welcome leap from the 150 sq ft clinic where they’ve worked for the last 20 years.

Spring is the busiest time for rehabbers. You can follow the progression of the season by the age of the patient. Bird admissions range from brand-new, naked nestlings in early spring, to fully-feathered UFOs (unidentified feathered objects) by late summer. Personally, I’m a sucker for baby birds. I love their pugnacious attitude, their unapologetic belligerence, and their wacky hairstyles. They are so vulnerable and so determined to survive.

Hummingbirds stand out amongst Comox Valley birds as the smallest and bravest native species. Adult hummingbirds weigh just over 4g, and are well under 1g when they are born. Hummingbird hearts beat up to 1250x per minute. Even when resting, their hearts continue at a whopping 250 beats per minute. As I write this story, I’m watching a gang of hummingbirds dive-bomb each other in my backyard; one even pinged a red cola can. Adult hummingbirds weigh about 1/1000th of a mature cat, but weight difference aside, guess who’d win that fight?

Baby hummingbirds and wounded adults arrive at MARS in shoe boxes, paper bags, small crates, and even nests. We’ve had baby hummingbirds arrive in their nest, still attached to a branch, removed and transported by a well meaning hiker. Rehabbers took the babies, nest, branch and all, and re-attached it to the original tree. Even though hours had passed, their mother was waiting and took them back right away.

Baby hummingbirds require constant attention and specialized care from dawn to dusk. Babies are fed every 15-20 minutes and must be kept perfectly clean so their feathers are conditioned for flight. Baby food is prepared fresh, almost exactly like Mum makes. It’s an appetizing slurry of bugs and nectar, tailored for the bird’s stage of growth. Imagine trying to hand-feed a wiggly navy bean that will reach 10x its birth weight in three weeks.

Years ago I was asked to care for a fledgling hummingbird for a few hours. A trained rehabber, Jackie, had been hand-raising it from nestling to fledgling. The hummingbird was close to release. When feeding time came around, I offered up the prescribed nectar-filled syringe. The little fledgling turned her head away from the syringe and shot me a flurry of indignant chatter that made her position abundantly clear. I was not Jackie and she wasn’t accepting food from me. Several more attempts met with the same reaction. Fortunately the indignant bird had decided it was time to self-feed. She ate on her own from a conventional feeder and was released the next day.

An adult hummingbird was once delivered with a strangely crippled leg. Hummingbirds spend a lot of time perching. This little hummer kept trying to perch and kept falling over. The situation was bewildering. It had no swelling or symptoms of a window strike, and none of the devastating injuries inflicted by predators. The possibility of pesticide poisoning or deadly bacteria from an unkept feeder loomed.

As rehabbers Jackie and Sandy methodically examined the bird, he became more stressed, a potentially lethal condition. Using a magnifying glass, they finally found the problem. A human hair had become wrapped around the hummingbird’s leg. With the assistance of some tweezers, patience and a deft hand, Sandy removed the hair. The hummingbird was given some nectar and time to destress before release.

A hummingbird’s most amazing characteristics are also their greatest vulnerabilities. Living a high-velocity, high-octane lifestyle, they are quick to recover but quick to deteriorate. A hummingbird’s survival in care depends on a trained rehabber’s ability to identify, treat, and release the bird as quickly as possible. Wildlife rescue requires watching, experimenting, and learning what works. For patients at MARS, it’s a journey of survival, but for rehabbers, it’s a journey of love.

To find out more about MARS, and for compelling stories and photos of the wildlife they assist, follow them on Facebook.