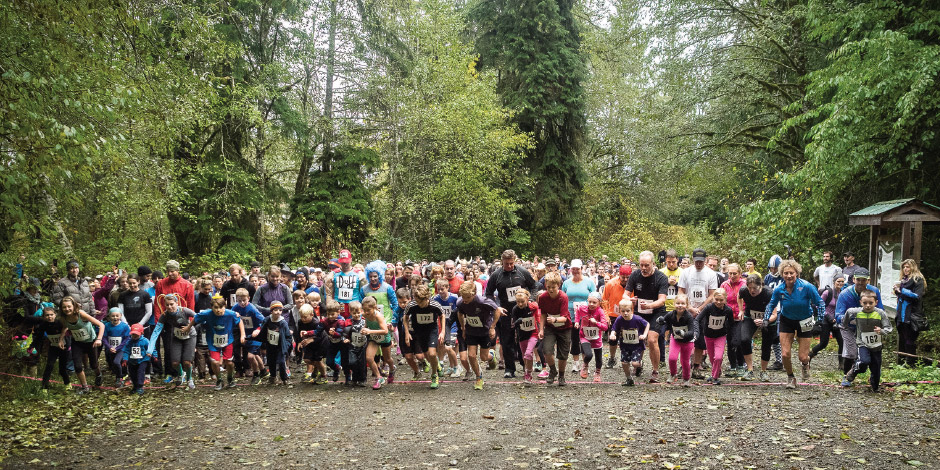 It’s the last weekend in October, and like so many salmon to their spawning grounds I find myself once again in a long line of runners tracing a slow bead up the narrow single track of Miners trail in the Cumby Hills. With calves and glutes and lungs in agony, I begin my annual meditation on the word “persevere.”

I didn’t start out the Perseverance Trail Run with this trepidation, this dawning realization that I may have gravely overestimated my calibre as a trail runner. Just twenty minutes previous I was glibly milling about the start line sipping my coffee with 350 friends and strangers. The pre-race vibe never fails to deliver little jolts of nervous energy, but in No. 6 Mine Heritage Park it’s both festive and mellow. The woodstove smoke wafting up from the village, the ochre fall palette–these have a way of smudging the sharp edges off my nerves. Sizing up the field, I see some skinny guys in singlets who will no doubt run the course in less than 45 minutes, and this helps keep me sharp; but the family dressed as The Simpsons, complete with Marge’s full 3-foot blue beehive, reminds me to relax and enjoy. Being the weekend before Halloween, a large minority of racers come in costume, which is part of what makes the event as popular as it is, for families and adults alike.

The race takes its name from both the Perseverance Creek and Bronco’s Perseverance trail, with which the 10.5 kilometre course flirts. While endurance and adrenaline junkies on foot or on wheels, are the ones persevering through the hilly terrain these days, we are only the most recent generation of persevering sojourners here. The creek was named “Perseverance” by dominion cartographic staff member W. H. Boyd in 1922, that name still appears on most maps (although the historic name of Coal Creek has been adopted locally). Decades earlier local miners toiled at the Perseverance Mine near Nikkei Mountain. And in more recent legend, Bronco’s Perseverance Trail was named for the long-time mayor.

As I run the course, I think of the early miners of Cumberland and their experience in this place of Perseverance. The endurance of harsh working conditions that risked life and limb, the economic injustice and the racial castes. For them, this suffering was necessity. For me, here in these hills, it is a choice. I don’t know what drives me to choose the sweet suffering of endurance running. I do know that while I’m making the two-kilometre climb from Miners to Bucket of Blood, my estimation of myself erodes, self-doubt sets in, and I am humbled to my knees (For which I paid cash). With each inch of elevation gain, gravity sloughs anything false off me.

Just as I console myself that probably no one runs up Miners, a racer in full Sock Monkey costume sashays past me and trots out of sight.

But the mortification of Miners eventually passes: I’m at Bucket of Blood, I’m at the halfway point, and goshdarnit if I am not actually jogging now–running, even–on the sweet rolling single track and outcrops of sandstone that signal the worst is over and redemption is near. I turn onto Bear Buns and the ravens keeping watch and greet me with welcoming caws, just as they always do. Or possibly they are yelling at me to get the hell off their turf, but I don’t care because I am running, bounding, dancing downhill and I am happy. I AM A RUNNER!

The Perseverance Trail Run has been offered in more or less its current form for a decade. It originated in the 1990s when a group of rogue runners called the River Rats held an annual fall trail race at Tomato Creek until the years of frustration dealing with logging and permitting challenges sent them looking for fresh horses to help out.

Enter Lené Curts, owner of Extreme Runners, and Sarah Seeds, owner of Equilibrium Lifestyle Management. Together they have co-hosted the race for the past ten years. Most importantly, they shared the River Rats’ commitment to ensure profits from the race went to help sustain the forest. From the beginning, Perseverance has been a fundraiser for Cumberland Community Forest Society. Over the decade they have seen the pot grow to over $146,000 in 2014, thanks to a forest fairy who matched the money they raised.

“I am really proud of where we’ve taken this event,” says Lené, who took her final bow after last year’s epic event, handing the reigns over to Sarah.

Although trail ultras of 50k are exploding in popularity, Sarah is careful to keep her eye on the prize: to raise money for the forest. “A longer race would require that much more work and resources from the community, and the funds raised may not balance out in that equation,” Sarah says. “Then we’d just keep it as it is. We’ve got a good thing. But if it means we could save more forest, you never know.” 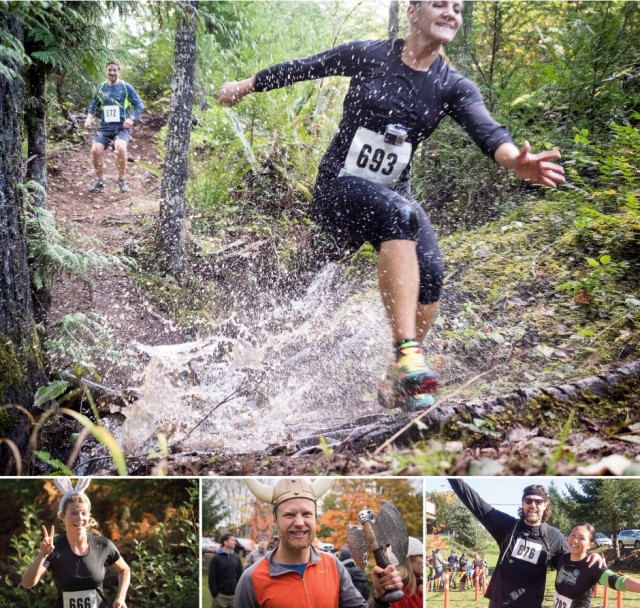