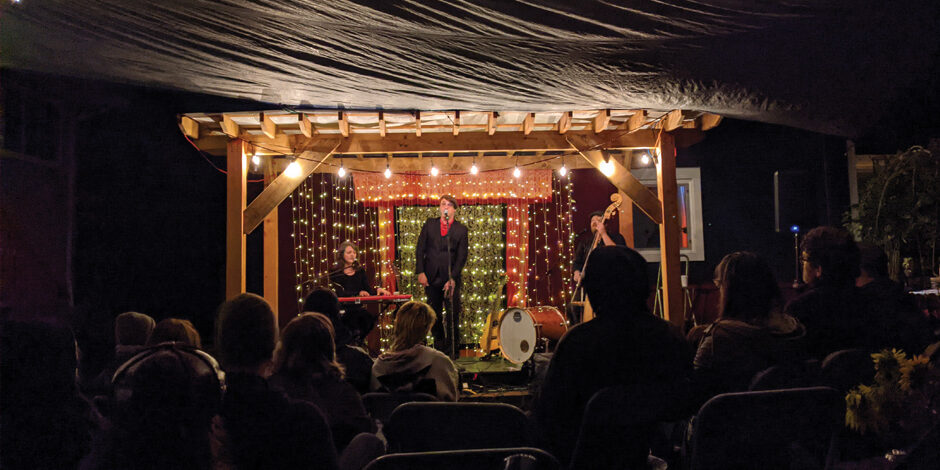 MUSIC WAS OUR CONTRABAND

Backyard micro-gigs reunited performers and audiences during the second summer of Covid.

May 31, 2021: “Hey, Meaghan, we’re thinking if some restrictions lift this summer we might try to book some shows for early July. It’s all dependent on health orders, but if things are looking up would you consider some sort of outdoor concert? Even a backyard private thing with a 50ish capacity. No pressure. Totally understand if it doesn’t feel right.”

Live music was among the first things to go, and it’s been the last thing to return. Even as hockey arenas and swimming pools reopened in the summer of 2021, musicians and music organizers were left on the sidelines, wondering what would be left of the independent music scene when the Covid dust settled.

In the early days of the pandemic, venues folded and musicians live-streamed like their life depended on it. Even though there was lots of funding out there for the arts, the reality was, there’s nothing like the magic of a live show. Music lovers and music makers alike were gutted.

My partner, Bobby Herron, and I have spent a lifetime tangled up in the music scene as musicians and producers. Bobby toured as a professional musician, and we’ve played in bands together for over 20 years. Creating music, festivals, and community events is part of our identity. It’s in our DNA.

We had talked about yard concerts before, but we always figured that someone else had a nicer yard and more free time than we did. Someone else would do it. Last summer it became clear that “someone else” was us. Cumberland’s Lower East Side venue was born.

The angle was this. Rented venues or public parks were complicated by insurance requirements, venue capacities, and crowd management. But public health orders permitted private outdoor parties of up to 50 people. We were confident that we knew 50 people—friends, and friends of friends—who would happily pay for an intimate, private show. A micro-gig.

We weren’t alone this summer. Friends on Gabriola Island built a beautiful little stage in their backyard and hosted shows for local and touring artists. In fact, there are networks of hosts across the country creating music venues grounded in community: raw, authentic, intimate, and bureaucracy free.

At times we felt like we were entering a new Roaring Twenties, with a new version of the underground venues known as speakeasies. These illegal venues were popular during the Prohibition years of the 1920s and ’30s. Some were operated by organized crime; others were set up by small business owners. Booze—some tasty and some truly horrid—was sold secretly.

They had clear house rules to keep them under the radar: No yelling. Do not bring anyone you wouldn’t bring to your own house. Exit the venue briskly and silently; people are trying to sleep across the street. Our rules were the same.

We took nothing. No cut for the house. 100% to the musicians. Bring your own booze.

Live music was the contraband.

We hosted four sold-out shows. The first concert was with Aerialists, a four-piece progressive folk ensemble, during the infamous heat dome. I felt like we were programming for the apocalypse; the west-facing stage was assaulted by the July heat. When the music started, we all melted. Tears flowed as sound waves vibrated through the yard and through our bodies.

The second concert was with Corwin Fox. There was an ominous threat of rain. Our friend Steve covered the entire back yard with blue tarps, creating a surreal undersea glow. Corwin was launching his first book of poetry. It was his first live show in 15 months.

More tears. A few people drank too much. Out of practice, I guess. Aren’t we all?

Wax Mannequin followed. He was recording at Corwin’s studio, so we decided at the last minute to do a punk-rock-unplugged show. His intense, visceral music left us feeling naked and vulnerable. Neurodiversity was celebrated. More tears.

The final concert was with the C.R. Avery Band in September. We’ve known C.R. for over 20 years. We tarped up the entire yard again as a fall rainstorm loomed. Folks brought blankets and warm, boozy beverages; the music was sexy and steamy. Water poured off the dropped corners of the tarps in intervals, adding irregular percussion to the night.

Music was back. For now.

But after the C.R. show, the nights started getting cold. While the tarps could hold off the rain, they couldn’t hold in the heat. We surrendered Cumberland’s Lower East Side to the changing season. We returned the 50 rented chairs and took down the lights. The underground went underground.

We’re not sure what next summer holds for our new little venue and for music presenting in general. We plan to help produce a free summer concert series in the Village again (on hiatus since 2019). One thing we’re sure of is the preciousness and intimacy of small-format shows. Big crowd music events may return, but I don’t think we’ll be organizing them.

Last summer’s shows helped my little family remember who we are and what truly motivates us as creatives and organizers. This isn’t our business or our profession. It’s our passion. We want our daughter to understand that music is more than a commodity.

Making music, and sharing music, is central to being human. We hope everyone who was part of our backyard shows—or any other backyard show this summer—feels a little more human now.