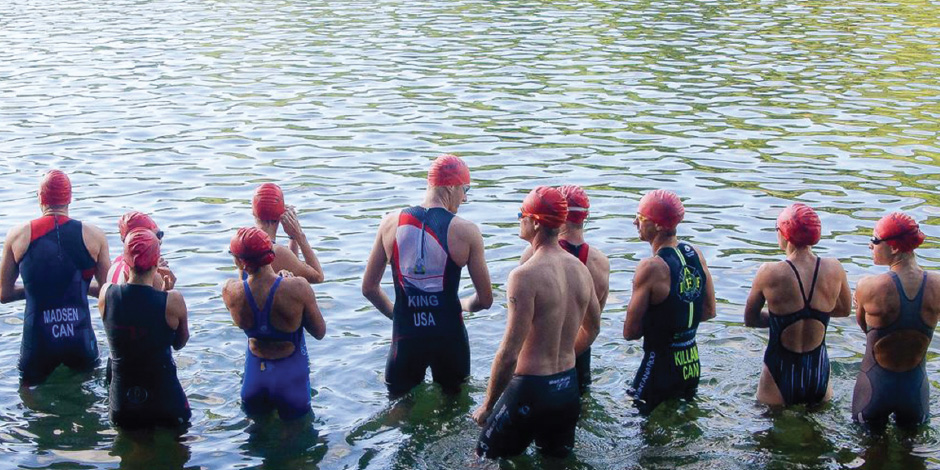 My first XTERRA: Why not?

It was some time in April, while I was sitting in my chiropractor’s office, having just injured my back filling our newly made, raised garden beds. As we chatted about his triathlon posters, I suddenly heard myself saying yes to a 1500m open water lake swim, 24km mountain bike ride, and 9.2km trail run. “Why not?” I thought. I already ride, run and swim with my kid in the pool.

Over the next couple of months I picked his brain during every treatment. How do I train for this? How often should I run? How many days a week should I ride? But I don’t ask him any questions about swimming. I had a mental block regarding the swim. Every time I drove down to Comox Lake to train, I’d park at the boat launch but never go in, due to a long-time fear of deep, dark water. I hoped that when the time came, I would remember what to do.

On the day of the race, I parked along the road and started seeing lots of people from the Comox Valley: Kelsey, Tyler, Clay, Natalie, and Roanne. My nervousness went away. I signed in and found a spot to park my bike. I tried to look like I had done this before as I went down to the lake to make small talk before starting the open water swim– just me and a couple hundred of my new race friends. It was a sea of black neoprene superheroes and me, the one guy wearing baggy shorts.

As I came to the end of the second lap, I was encouraged because people were behind me. I got out of the water and things started to go dark; I couldn’t figure out where to go next. I thought I was going to pass out. I found my bike mostly because it was one the last hanging up on the racks. I dragged my stuff toward me, opened it up, and took out my dry, spandex riding shorts. Now the challenge was to try and get them on. I dropped my towel and tried putting both legs through at the same time. I lost my balance and over I went. A race marshal walked over, pulled my number off my back and said, “DISQUALIFIED”! You’re kidding me? I just swam through the deep, dark water only to be disqualified for being nude!

I stood up, pulled my shorts on and said to myself, “I drove here and I am going to do it anyway!” I finished the 24km loop and made it back to the transition area where the marshal was giving me the side eye. I figured I couldn’t be disqualified twice, so I dropped my bike shorts, pulled on my running shorts, and off I went, confidently, on the 9.2km trail run.

As I finished, I ran right into Roanne and Clay. It was great seeing them at the end. I’d finished the race! I hung out on the lawn and watched the winners being announced. I learned a lot in that race (pro tip: layers) and look forward to doing it again.

Chatting with a friend a couple of months back, he suggested I join his team for a running race called the Sinister 7. It covers 161kms of rugged mountain terrain. Sounds fun. Sign me up!