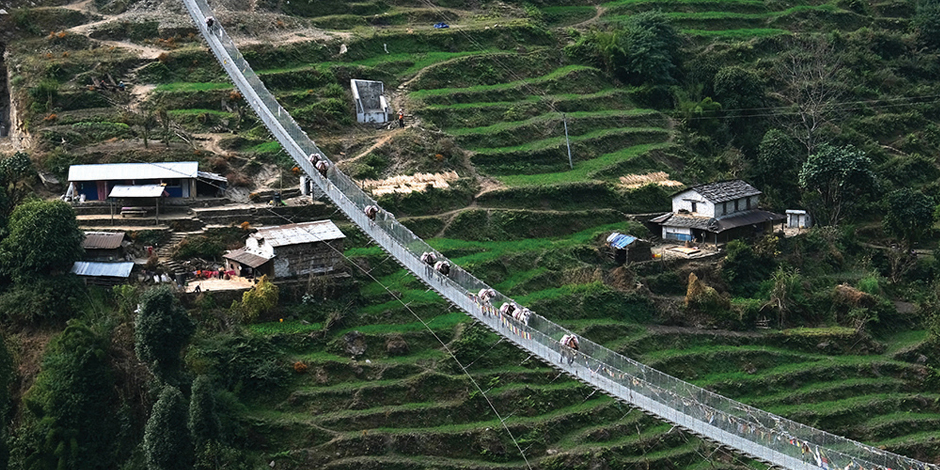 Dogs, donkeys, and other delights of trekking in Nepal.

My quads burned. I stared up the seemingly endless, brutally steep stairs, then I glanced back down the valley and saw where we’d come from. It appeared to be a week’s walk, and yet we had done it in the span of one morning. It was our second day trekking in Nepal and the fifth day of what was to be a three-week family trip of a lifetime.

I paused for a moment to stare at the staggering beauty of what I was seeing: blue-green hills fading into the distance, hand-cut terraces plummeting to the valley bottom, and of course, Machhapuchhre (the unclimbed mountain that the locals call “Fishtail”) looming majestically to almost 7000 metres above it all. The beauty stole our breath away.

Before coming to Nepal, I had imagined seeing the sights, but I hadn’t thought much about smelling the smells. But already, I had become very aware of them: the smells of frying food (like momos, which are delectable little vegetable dumplings), diesel engines, dogs’ fur, woodsmoke, smog…

And oh yes, the smell of animal fecal matter, specifically donkey poop. In the Annapurna area, where we were trekking, colourfully adorned donkeys are seen daily, because building supplies are heavy and there are no roads connecting many of the villages. They carry sacks of concrete, propane tanks and other supplies, and sometimes food, although more often that’s transported by humans. People haul huge baskets of oranges, sacks of flour, and even cages filled with live chickens. The beautiful views of soaring mountain ranges contrasted strongly with the stairs under our feet—often thick with mud and layers of poop.

Earlier that day, we had crossed a suspension bridge that stretched almost 300 metres across a deep valley. My mother, who has a fear of heights, found it harrowing despite its sturdiness and recent construction. I helped her across while maintaining a cool head in the face of danger (i.e. a donkey coming in our direction).

There are a lot of dogs in Nepal. When we arrived in the lakeside town of Pokhara, I decided I wanted to start photographing every dog I saw. Along all the trails we hiked, we saw adorable puppies, handbag dogs, and a range of other dogs, all the way up to Labrador retriever-sized. All of them were mutts, and many bore a very strong resemblance to each other. They had clearly endured through hardship in the face of Nepali winters, which are often cold, brutal and without mercy. Yet almost every single one was happy to say hello and appeared content with its mountainous life—even the dog missing a leg.

Nepal has almost as many mountains as it has dogs. Many of them appeared to be very small because they were right up against some of the largest mountains on the planet. But they were probably 5,000 metres or so high—almost as tall as Canada’s highest peak, Mount Logan. For example, we climbed the famous Poon Hill to watch the sun rise. At 3,210 metres, it’s much taller than Mount Albert Edward, and yet it seemed like a tiny little hill.

Some days we were above the clouds, while other days we were enveloped in mist and could hardly see twenty paces in front of us, let alone the Himalayan landscape we were travelling through. The best days were cloudless, with the peaks kissing the perfect blue sky.

In Nagarkot, on our second-to-last day of trekking, we came face to face with the world’s largest mountain.

We definitely did see the 180-degree mountain range where Everest is located, but we were a significant distance away, making it hard to tell if we were really looking at the famous giant. As an experience, it was a little lacklustre. After all, I can see many epic and beautiful mountain ranges in my home country. It was still a pretty cool spot, though, and maybe some day I’ll go back and really experience the biggest mountain on earth.

Although we were there past peak trekking season, we met other trekkers who hailed from all over the planet—primarily Chinese groups, Australian high-school kids, and even Nepalis visiting from other parts of the country. But it was the local people that I will remember the most. Some folks were just out to make a buck, but I found most people startlingly kind and hard-working. I saw a boy standing in a bucket, mixing cement with his feet. I saw people selling fruit in the mountains, which means carrying large baskets up long trails and not returning home until all the fruit is sold. I saw restaurant owners, who would pull up vegetables and greens from their gardens to make our meals. I saw old, old women carrying massive loads of bamboo or shrubbery—I assume to make baskets, but I never did learn their true purpose.

Aside from the people, there are a thousand impressions that will stay with me from our time in Nepal. One of my favourites is the experience of hiking hard all morning to arrive at a little guesthouse with an incredible Himalayan view. Taking off our packs from our sweaty backs and eagerly awaiting the piping hot tea and delicious food that are sure to come.

This is the life. 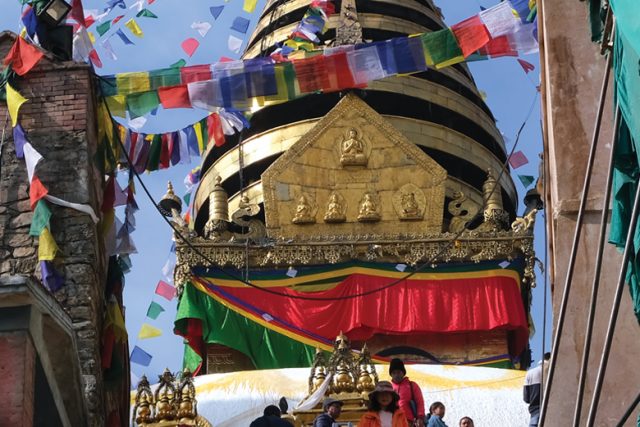