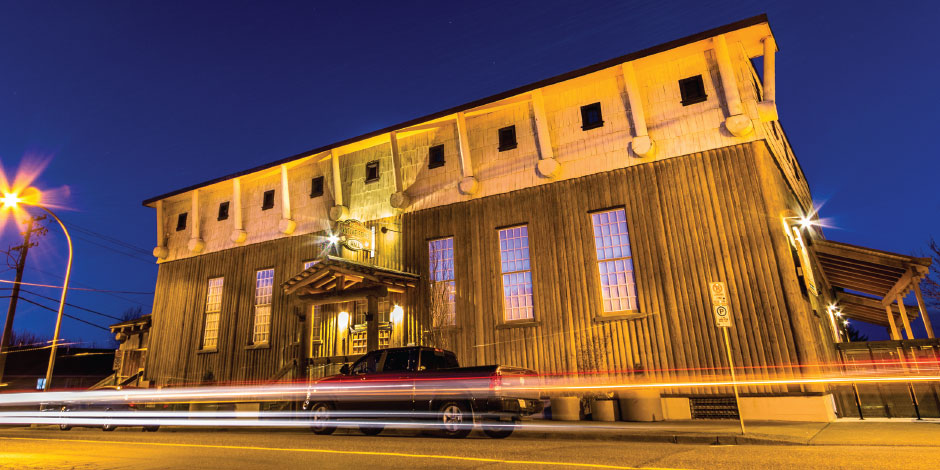 Long known as “the cultural heart of Courtenay,” the Native Sons Hall is the most historical and iconic building in the Comox Valley. A prominent landmark that has stood tall for nearly nine decades, it represents the largest free span log building in all of Canada. Its vibrant history tells a long story of community resourcefulness and dedication to the idea of creating and maintaining an active centre for a thriving community.

Since 1928, the hall has served as a community centre for sports, conventions, and the arts, and played many roles leading up to the early 70s including a gymnasium, dance hall, post office, and roller-skating rink.

Rewind to 1921 when the Comox Valley was a much different place. A group of diligent Courtenay citizens came together and contemplated ways to enhance their community, and envisioned a multipurpose meeting hall. They chartered the Native Sons of Canada Assembly No. 3—with Joseph McPhee as President—and with the loyal support of local residents, all agreed to accept the ambitious undertaking of planning and constructing a community hall.

According to Deborah Griffiths, the Executive Director of the Courtenay and District Museum and co-author of Watershed Moments—A Pictorial History of Courtenay and District, it took a skilled team to plan and build the hall alongside the efforts of the Native Sons and the Canadian Daughters.

“Robert Filberg, Manager of Comox Logging and Railway Company, helped provide the vision for a log building to honour those who worked in the logging industry,” she says. “Architect William J. Hagarty designed the building, and Bill Eastman, one of Canada’s foremost bridge builders, supervised the construction. Filberg donated the enormous 65 ft. long Douglas fir logs used for joists and roof trusses, and Comox Logging and Railway salvaged many of the logs from the 1922 fire that devastated the Black Creek and Merville areas.”

Comox Logging and Railway transported the logs by train on the railway grade just behind the hall to Roy Uchiyama’s Royston Lumber Company. There the logs were squared-off, returned, and set vertically into the hall’s concrete foundation.

On its website, the City of Courtenay Planning Department notes, “It is significant that the Native Sons Hall is comprised of donated logs from local timber companies, and its prominent location above the former Comox Logging and Railway line serves as a fitting symbol to the legacy of the local logging industry, which had a profound impact on the social and economic development of Courtenay.”

On August 17, 1928, the Native Sons and Canadian Daughters held the first gala dance at the Hall, and on October 3, 1928, Lieutenant Governor Randolph Bruce laid the cornerstone. The Native Sons Hall was in full operation.

For several decades the Hall was a pivotal part of Comox Valley life, but by the early 70s alternative infrastructure had emerged such as theatres and gymnasiums, and attendance at the hall noticeably declined. Prompted by this trend, a decision was made to merge The Courtenay and District Museum with the Native Sons Hall to form a joint committee to maintain the building, with the museum occupying the top floor.

In 1987, signifying the community’s early stewardship and concern for heritage conservation, the hall became the first municipally designated heritage building in Courtenay. In 1992, the BC Heritage Branch funded a heritage needs assessment for the hall, and in 2000, the museum vacated the building to move into the restored post office building across the street. On January 1, 2004, the title and operation of the hall was generously passed over to the City of Courtenay, where it remains to this day.

Since then, the hall has received numerous major upgrades. It is used by various service clubs and offers recreational and social activities including weddings, dances, meetings, concerts, and community events.

As the City of Courtenay Planning Department explains, “The Native Sons Hall is socially valued as a symbol of the advancement of the Canadian spirit… Actively used for a span of nearly 90 years, the Native Sons Hall reflects the importance of social connection and recreation in the development of Courtenay.”

Thank you to the City of Courtenay and Deborah Griffiths for permission to use their archival information.