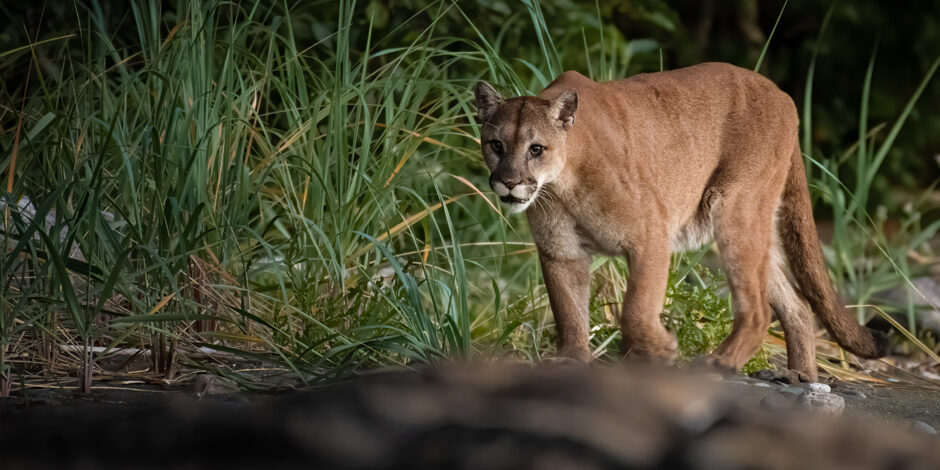 NEITHER SEEN NOR HEARD

The Island’s apex predator might just be the perfect neighbour.

Not long after I moved to Cumberland, when it was easier to get lost in the forest, I was riding my dirt bike down a logging road and spotted a huge figure in the distance. At first, I assumed it was a lumberjack who’d escaped from decorating the mahogany down at the Waverley Hotel, but it soon became apparent that it was far larger than a mere human. It was too tall and furry to be anything but a Sasquatch.

Then it set itself back down upon all four paws, and I realized this was my first cougar encounter. As I approached, the cat stood its ground for a moment. Then it turned and, with just one great leap—its body, from nose to tail, stretching the entire width of the road—it disappeared into the woods without a trace. (Cougars are known to cover up to 40 feet in a single bound.)

I rushed back to town to report my great find, as I had heard how rare these encounters were. Some townsfolk assembled dogs and guns. Others clutched their little white dogs to their chests, like small noisy purses, and vowed never to venture into the woods again. Stories poured out about how in 2001, millwright Elliot Cole saved a man from a cougar attack in Port Alice with nothing but a lunch bag, his bare fists, and a bicycle. Some doubted me altogether, as they’d spent a lifetime in the woods without ever having seen one.

What my encounter didn’t lack was a response. Clearly, cougars stir something primordial in the human psyche.

It’s estimated that Canada is home to about 4000 cougars, with about 3500 of them in British Columbia. Vancouver Island has the world’s highest population density of these “mountain lions,” at somewhere between 600 to 800. However, encounters remain quite rare, even though it’s not like cougars are small creatures to hide: males average about 60 to 80 kg (females somewhat less).

Although cougars are generalists who do not object to taking down a raccoon or marten to snack on, they prefer blacktail deer and elk: they’re the largest predators of these animals on the Island. In the Interior, they are fully capable of taking down a juvenile moose. While attacks on humans are rare, I’ve heard many hair-raising anecdotes from logger friends about being stalked within metres or being observed by one of these silent ghosts, staring down from an airy bluff. Apparently, cougars also really do enjoy little white dogs in a way that would scare the bejesus out of poor Aunt Agatha and leave her heartbroken for eternity.

Jaguars stalking the tropical jungles of the Americas have been revered as deities, traversing the world between darkness and light. Safari-goers travel halfway around the world to witness magnificent lions on the Serengeti.

Yet here on Vancouver Island, our local big cats are more often treated as if they were that strange neighbour you rarely see, but enjoy discussing at length.

Cougars are arguably the Island’s apex predator (other than human hunters), and, as such, they serve several important roles. They cull the weaker members of their prey animals’ populations. They keep large numbers of herbivores constantly moving, which means they don’t get too numerous or overexploit any one area (disease often follows density). Finally, they suppress competition from other predators, keeping numbers in check.

Given the abundance of cougars on the Island, it’s quite likely that you’ve been watched at least once by a large feline—more curious than deadly—while walking through the woods. The presence of large cats reminds us that we still live in a frontier of sorts, where all creatures serve a vital role in a robust ecosystem.