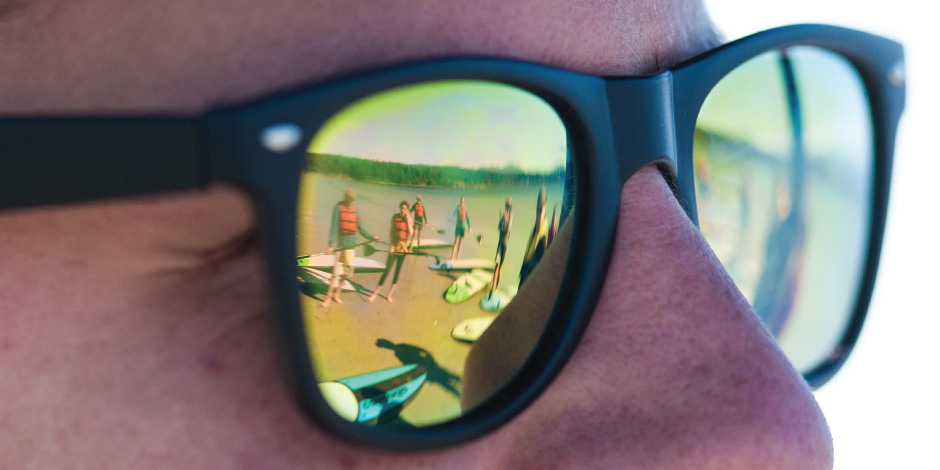 Not Just For Kids

The leap of faith challenges just about anyone. Standing at the top of a telephone pole, at the Tribune Bay Outdoor Education Centre, you literally leap into space. Jump far enough, about six feet, and a trapeze comes into reach. Miss or fall short and a belayer on the ground provides a gentle landing. For most it’s a test of courage and trust. But when you’re five feet, two inches tall, it’s all trust according to Amanda March. “I knew I had a really slim chance of doing it,” she says. “I had to trust the person who had me on belay and then just push myself.”

That was more than 10 years ago, when March was in her early 20s and still on the hard to get along with, misspent youth side of things. She’d grown sick of working at a pub on Hornby Island when she heard that Tribune Bay was accepting applicants for its leadership program. Every year the centre—sitting just above the tide line at the east end of Tribune Bay—puts hundreds of school kids through a week long camp of outdoor activities that challenges their leadership, team work, and perseverance skills. At the same time, they run a leadership program training young adults to gain the skills needed to lead those one week camps. March made the cut for the leadership course and began an immersive six weeks learning first aid, kayaking, rock climbing, high ropes, and other skills. But it was the soft skills of living and working with the other interns that shaped her future self.

“Everything about the course pushed me to step out of my comfort zone,” she says. She struggled in the structured environment, but it forced her to hone in on teamwork and leadership skills, her ability to deal with conflict and, perhaps most of all, her resolve. “It was a great starting point and foundation for the personal development I did later in life,” she continued.

March’s story may be unique, but the result of time spent at the outdoor centre isn’t. Whether it’s the six week leadership course or a five day camp with a grade six class, the centre has influenced young people’s lives for 28 years. Days at the camp push kids to challenge themselves, work as a team, and overcome fears. When they do, challenges at home or at school often seem more approachable. Quiet kids emerge from their shell and, outside everyday routines, new stars emerge.
This is stuff that anyone could benefit from, not just students. But, restricted by its provincial park use permit, Tribune Bay was exclusive to youth—school groups, summer camps, and the internship program. No adults, no families, no retreats, or corporate groups. But no more! This summer, for the first time, everyone’s welcome to experience everything that Tribune Bay Outdoor Centre has to offer.

“With our new mandate anyone can come,” says Gord Campbell, the only executive director the outdoor centre has ever had. “We’ve had to say no to all of these requests. Now we can say yes. It’s a positive change and one we’re really excited about.”

It’s the biggest shake up since the founding of Tribune Bay. The centre’s namesake is one of the nicest beaches on the east side of Vancouver Island with its long crescent of flat sand that extends out hundreds of metres at low tide. In the 1970s a resort sat at its east end, where the outdoor centre is today. The hotel closed in 1978 and there was talk of subdividing the beachfront, but Hornby residents objected. So, the province and the Devonian Foundation bought the land and turned it into a provincial park. At the time, several Comox Valley school principals had property on Hornby. To them, the old hotel grounds were the perfect place to camp with students and after a few years of this, the idea to turn the property into an outdoor centre emerged. But it wasn’t until 1988 that the permits and money to make it happen came together.

During all of this Campbell worked as a social worker, and the people he worked with were in crisis. “I wanted to get to them before they got to the social worker stage,” he says. “I knew firsthand what kind of impact outdoor education can have for folks.” So when the new outdoor centre needed an executive director, he made his own leap of faith.

There wasn’t a budget, so Campbell’s job was to find grants. The first $5,000 came in the form of building materials from a building centre in Comox. He leveraged it to get 25 times as much money. In addition to camping, he fixed up the cabins and built dorms. Later he added yurts. Students came from the Comox Valley and Qualicum school districts, as well as specialty programs like groups of deaf or blind students.

At its busiest, Tribune Bay Outdoor Education Centre has hosted up to 140 students per week with as many as 22 staff members. But with the new mandate, Campbell decided to cut the site’s footprint in half and give guests a more intimate experience.

The first new program is a family camp starting up in August. “It’s an opportunity for the family to escape from their busy lives and really connect with each other,” Campbell says. The camps include accommodation, daily instruction in an activity like stand-up paddle boarding, kayaking, or rock climbing, and plenty of free time to explore Hornby Island. It’s restricted to six families at a time.
While families can stay in a yurt, a cabin, or a dorm, it’s a great opportunity for rusty campers or anyone who’s never camped, Campbell says. “You could arrive here with the tent in the box and no idea of how to set it up and we’d help,” he declares. “A lot of new Canadians want to take part in the Canadian dream of camping, but don’t know how. This is a great place to learn.”

The centre is approachable to just about anyone, and any type of group from yoga retreats to corporate groups. All sorts of adult groups can access programs similar to the family camp. Many of the centre’s activities are easy on the body and it’s easy to learn what Campbell calls “lifelong sports.”

The final new program is still in development. It’s like the leadership program, but focused on high school students. During time off from school, like weekends and spring break, 16 to 18 year olds can come and work alongside centre staff, earning high school credits. Along with training in leadership and working with youth, it’s a real world test to see if outdoor education is a good career path.

Regardless of the program, the basics of the centre remain the same. It’s an escape from regular life—an opportunity to face new challenges and a chance to unplug. “We discourage electronics,” says Campbell. “The idea is listen to nature, enjoy the quiet, and focus on the experience and the people you’re with.”

It’s a formula that works. Strangers regularly share their own Tribune Bay experience with Campbell, like how it was the highlight of high school or how it changed their child’s life. One story stands out. While at the White Whale Restaurant in Courtenay, Campbell sat at the bar next to three, loud and rambunctious 20-something construction workers. When they found out where he worked they settled down and one of them talked to him for an hour about the incredible experience he had at Tribune Bay’s summer camp. “It really cheered me up after a hard day,” says Campbell. It is stories like these, watching a blind kid succeed on the climbing wall, and seeing someone like Amanda March emerge a better person that keeps him on the job almost 30 years later.

As for March, her Tribune Bay experience is about to come full circle. This summer her 12-year-old son is planning to do a Tribune Bay summer camp. “I’m excited for him to go there and do all the stuff I really loved doing,” she says. “I hope it’s just as positive an experience for him as it was for me.” 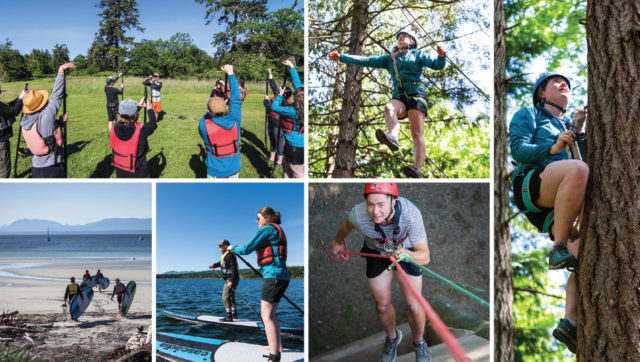