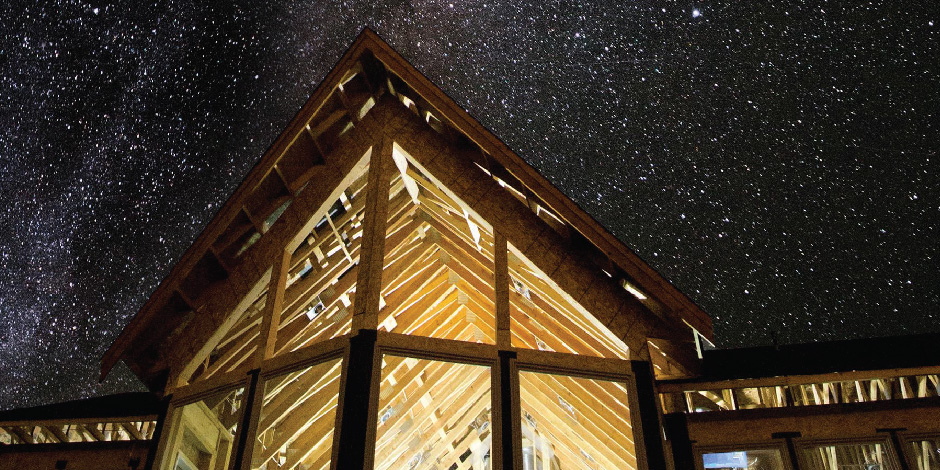 Off-the-grid: the Beauty of Disconnecting

Mention to someone that you want to live off-the-grid and it will conjure up images of a smoke-filled tarpaper shack, pit toilets, and diesel generators running 24/7. My own experience living off-the-grid (okay, we had a small temporary 60amp service) was in southwestern Ontario. My parents owned property two hours north of Toronto and decided to build a 12’x16’ shack from recycled hockey rink lumber. There was no running water, we heated the cabin with a wood stove, and my grandfather built us a luxurious outhouse.  In the summer, we bathed in the river that ran through the property, and in the winter my mom filled a blue barrel on the deck with water heated on the propane stove. It was 1977.

Fast-forward to today and Google off-the-grid, and you’ll be inundated by thousands of sites with information on the latest technology, do-it-yourself hacks, and homeowner success stories. There’s a certain romance to the idea living off-the-grid. It’s a throwback to a simpler time, a modern-day pioneer feeling. While it doesn’t appeal to everyone, there is a certain mystique that surrounds someone who has chosen this way of life. Despite the abundant technologies that allow almost anyone to go offline, we, as a collective, find it so much easier to be tied into the grid. So when I was asked to write about a local man who had devoted the past year of his life to building a home disconnected from the grid, I had to meet him.

Allan Sawchuck was born and raised in the Comox Valley. The 37-year-old father of two boys has always pictured himself building a house completely offline. Unfortunately, due to prohibitive bylaws, he was unable to move toward this goal on the property he owned at the time. After searching Google Earth, he found a piece of property located within the regional district, with the right zoning on which he could build his ideal home.

On perhaps the wettest day of the year, I ventured out to his property, located not 15 minutes from town. Passing through the gate and driving 270M up, along a rough gravel road, I noticed the complete absence of hydro or telephone wires. When I pulled into his driveway I couldn’t help but notice the 675 sq ft bank of solar panels adjacent to the home. There really was no question; I was in the right place.
Al could be described as quietly understated, but his passion for his chosen way of life was apparent as he walked me through the stages of construction. In order to power the 3500 sq ft home, that overlooks both Comox Lake and the Comox Harbour, he turned to Andrew Sharrock from Island Electric. The 45 panel solar bank, which faces south, has a combined output of 11 kilowatts. The DC electricity from the panels is converted into AC power that will in turn charge 24, 2-volt deep cycle batteries. Without boring you with a full description of Ohm’s Law, it’s the amperage, not the voltage that matters. The power stored in those batteries can run his house, without any top up from the panels, for three days. When asked why he decided to use solar, considering our wet winters, he simply tells me that wind can be somewhat temperamental.

To heat the house, Al chose in-floor hydronic heat. Outside is a small outbuilding that houses an automatic wood boiler. No pellets required. Firewood collected from his property heats the water to 60C before it is circulated throughout the house. With the leftover PEX tubing, he also heats his driveway, because no one has time to shovel snow. So much for the notion of a tarpaper shack. For additional heat, he has chosen to install a centrally located catalytic wood stove, which re-burns the smoke, and produces far less emissions.

Like most rural homeowners in the regional district, Al gets his water from a drilled well which, lucky for him, produces at a rate of five gallons per minute. He also has installed a rainwater collection system to capture runoff from his roof, which is stored in two 600-gallon cisterns buried in his backyard. The water, which isn’t potable, will be used for gardens and in-floor heat if he chooses to do so. In the future he has plans to capture surface runoff in a pond and may even consider a small hydroelectric system to supplement his solar power.

Every step of building his home was an exercise in practicality and maximizing efficiency. In the summer, solar power will be abundant, so he will be able to run a heat pump and have air conditioning. To decrease draw on his batteries he will run his dishwasher during the day and avoid running high consumption electronics after the sun goes down. Consideration was given to minimizing electrical draw from his solar powered system: low voltage LED lighting, a catalytic wood stove that doesn’t require electricity to burn pellets or circulate hot air, and a pump less septic system. Yes, even the most efficient home will create sewage. Without getting into the specifics, his system, designed by Bruce Nichol from Accelerated Excavation, works on gravity, flushing the system automatically when the fill level reaches the tipping point.

When asked why he chose to build a house off-the-grid, he answered quite simply that he likes being outside and being a part of the environment around him.  He also alluded to the role of how much energy and resources a house consumes. By living off the grid you are far more aware of your rate of consumption and creation of waste. Cost to develop was also a consideration. Al explains that in order for him to simply tie in to the hydro grid on this particular piece of property it would have cost in excess of $100K. His total cost for the solar array, inverter, and bank of batteries came in at less than $37K, with no future operating costs, save for diesel to run his back-up generators when required, and replacement batteries. The solar panels have a 25 year expected lifespan, and even then will still convert power at a reduced output.

Reflecting on what my initial idea of what off-the-grid looked like, I was more than pleasantly surprised at how simple (to some extent) and accessible it has become. On the face of it, this way of life doesn’t look much different than living online.  Whether you choose to go offline or not, I think we can all learn something from these innovative homesteaders. Tied in or not, there are practical benefits in minimizing our electric draw and water usage, and in thinking of creative ways to capture rain and surface runoff. Although I think we can all benefit from being a little more aware of the environment in which we live, I can’t get over how captivating the romantic notion is, and the sense of adventure and mystique living off-the-grid inspires. It’s a return to nature, away from the white noise, and truly a simple way of life.