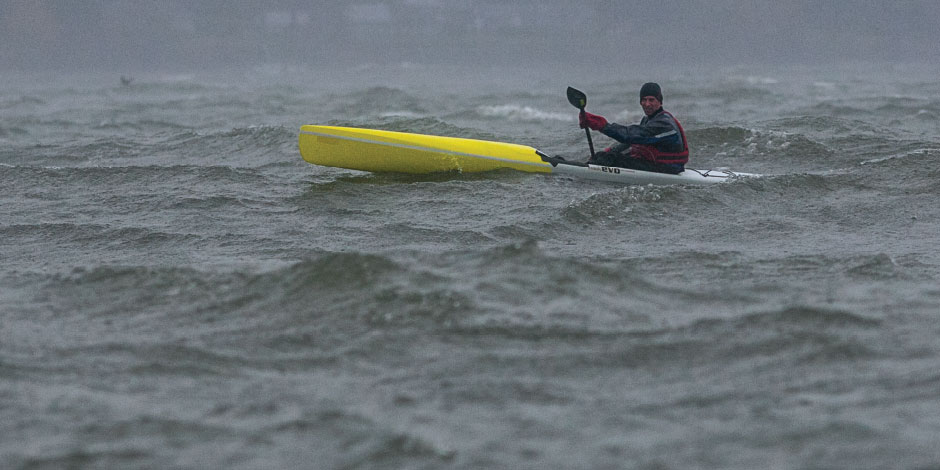 On a swell and a prayer

In one year, a local paddler goes from rookie to evangelist in the fastest man-powered boat on the water.

What a difference a year makes. I’m watching a small train of two-foot waves roll through a pack of paddlers at the start line of the 2017 MOMAR. One of these paddlers is Carl Tessman. A year before, in this same race, even calm waters caused Tessman stress while in his surf ski, a speedy sit-on-top kayak. Today he looks chill. In a minute the race will start and he will crush the field, beating the next fastest boat, powered by me and a partner, by four minutes.

Teacher bested by student. As the guy who used to sit around waiting for Tessman to catch up, I feel a mix of annoyance and pride. But I’m also reminded of how approachable the sport has become. When I bought my surf ski more than a decade ago, I could count on one hand the number of locals who could paddle these cigarette boats of the kayak world.

Back then I was a Comox Valley resident who loved the ocean but never spent time on the water. I was looking for an upper body workout to counter the running and mountain biking I did. The surf ski proved a salve to both activities, plus a dose of adrenaline. At about 20- feet long and just wider than my butt, these boats go fast enough to catch rolling ocean surf and beat just about any other human-powered craft. Assuming I could stay upright. The same attributes that make my surf ski fast also make it tippy. It took me months, and many dunks, to feel confident in the boat. However, the sport has changed since then. In the past years boat manufacturers have made huge leaps in maintaining the hull speed of surf skis while increasing stability. I mostly paddled alone, but after the 2016 MOMAR, I invited Tessman to come out with me. As he got comfortable in his boat he caught the surf ski bug, badly, and soon we were paddling in 30-knot winds. Even on the protected waters of the Strait of Georgia the waves can reach six feet, and feel even higher when they’re rolling through deep water. “It’s not quite the same feeling as dropping into a wave on a surf board,” Tessman says. “But when it’s blowing 20 knots, the water’s choppy, and you drop down the face as long as your boat, the insanity of being out there has an adrenaline rush that’s almost as good.”

Tessman, who has a self-proclaimed obsessive personality, was soon paddling five days a week. He started entering races. With a little coaching he got fast. And in the kayak leg of the Snow to Surf race last spring, he had the second fastest time. “Racing’s fun, but what I like most is just being on the water,” he says. “The ocean is more dynamic and varied than running or biking in the forest. Every time you get on the water, it feels different.”

The attraction of surf ski isn’t just for the fringe. In places like Bellingham, Washington and North Vancouver as many as 50 people show up for weeknight paddling races. In Australia, South Africa, and Hawaii, surf skis are as common as canoes and sea kayaks are around Vancouver Island. “There’s no reason surf ski paddling shouldn’t be bigger here,” Tessman figures.

The sport has the adrenaline and fitness aspect of trail running and mountain biking. The boats cost about the same as a decent mountain bike without the continuous maintenance. They are made with composite materials and are about half the weight of a typical sea kayak, making them easier to load on to cars and to launch. And with the right gear it’s a year round sport, as a leisurely paddle or an intense work out.“Surf ski paddling keeps my hips mobile and it engages core muscles,” Tessman points out. “It’s the healthiest sport I have ever done.”

In one year Tessman went from rookie to top amateur, winning races, paddling in extreme conditions and encouraging everyone he meets to get in a boat. He’s willing to take anyone out to try it. He even started a website (VISurfSki.ca) and a Facebook page dedicated to introducing people to the sport. “There’s nothing I’d rather be doing,” Tessman says, “than paddling my boat.”