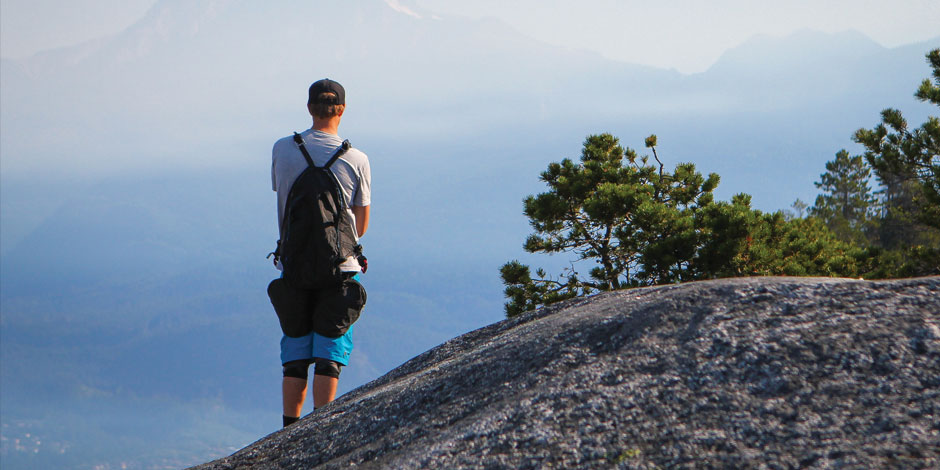 ON A WING AND A PRAYER

The misunderstood sport of speed flying requires practiced skill and careful calibration. It can also take a leap of faith.

My heart races and my hands shake as I check my lines for the third time. My speedwing is neatly laid out on the ground perpendicular to the wind direction at the top of a mountain. A headwind lulls and gusts, and my ears are tuned to the sound it makes through my helmet. I’m constantly trying to estimate the wind speed and predict how my wing will react to it. The voice in my head that questions why I’m here gets louder. What’s the point? In an instant, when the wind feels perfect and my mind goes silent, I square my shoulders to the edge of the mountain and let muscle memory take over as I sprint towards my departure.

Whenever the fact that I fly speedwings comes up in conversation, I’m typically met with confused looks and a barrage of questions. “What is it? Is that like a squirrel suit? Isn’t that dangerous?” I often pause to collect my thoughts and decide where to begin before stumbling my way through an explanation involving parachutes, paragliders, skiing, foot launching, and many hours of training.

Speed flying is a sport closely related to paragliding but uses a wing that is often less than half the size. These small wings fly at high speed and are extremely maneuverable. Pilots are attached to their wing by a piece of gear resembling a climbing harness, with a carabineer on each side. Two brake toggles are used to steer the wing. Training with qualified instructors involves much more than just controlling the wing. Having a strong understanding of weather, wind, topography, and how to identify safe launches and landing zones are key to becoming a competent speedwing pilot. Launching a wing can either be accomplished by running off a steep slope or cliff, or skiing with enough speed to take flight. A subgenre in the sport involves flying with skis and is called “speed riding.” It allows pilots to pick and choose which slopes they ski, ending with a takeoff over a massive cliff.

Speed flying access may be as simple as shuttling a mountain with vehicles. Or it can mean accessing the backcountry by touring or mountaineering, or with snowmobiles. Some of the most rewarding flights involve full days of effort and sweat in order to fly a 1000m vertical face in a few short minutes. Covering that much ground in so little time makes for an incredible “ground rush” and requires a pilot to gauge turbulence and decide how close to the terrain they can safely fly.

My stride lengthens and my steps lighten as the weight of my body is transferred into my harness. I lean forward with my hands back to fully load my wing, and as I stare out in front of me, the mountain disappears. Shifting my weight in the harness and tugging on the toggles, I make powerful turns and deep diving spirals towards the ground. The feeling of flight is incredible, but difficult to explain. My pre-scouted landing area rapidly approaches, and with my hands up I straighten my final flight path. Just before impact I flare my wing to soften the landing. After coming to a rest I look back up at the top of the mountain I just left minutes ago, and let out a loud sigh of both joy and relief. Another mountain checked off the list. 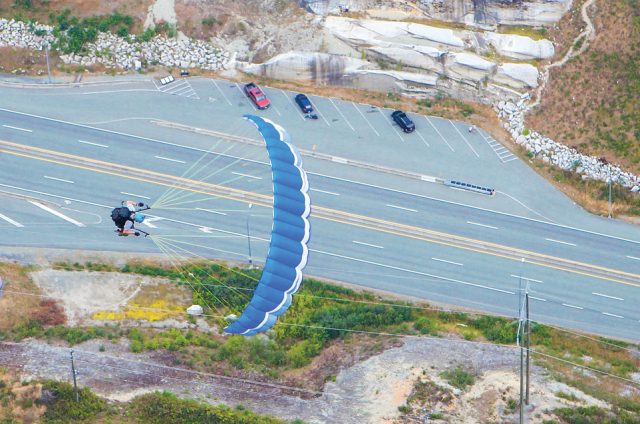