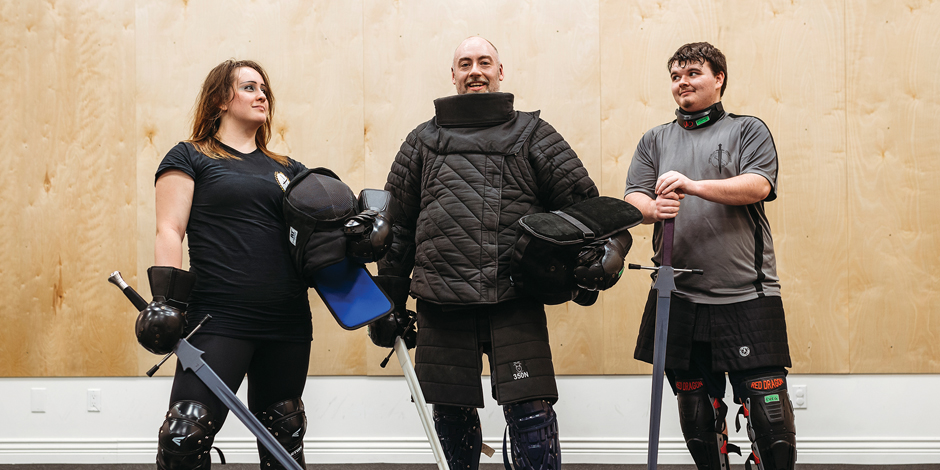 ON THE SHARP EDGE

Local swordfighters get medieval at the Comox Valley Combat Guild

A rare beam of sunshine reflects off a long steel blade, catching the eyes of a pair of observers who press their heads to the window. The sound of steel on steel rings from within as they step past the Comox Valley Combat Guild (CVCG)’s green sandwich board and push their way through the front door of Wild and United Athletics.

Inside, a half-dozen individuals are engaged in swordplay between rows of exercise equipment. Steel and synthetic blades arc gracefully between clashes and clacks. Pairs of students practice cutting and parrying. Some swing their swords slowly, while others, clad in heavy plastic gauntlets and wearing what look like reinforced fencing masks, launch themselves at each other with what seems like dangerous intent.

I’m not worried, since I’m their instructor. I dodge a phalanx of bound blades to greet the newcomers: “Hey, how’s it going? Interested in swords?” I raise my pitted steel blade for the observers to inspect as the class members continue their exercise. It’s a longsword, a two-handed, double-edged, cut-and-thrust blade with a crossguard.

Behind me, the students are following exercises that were first laid out over 400 years ago by Joachim Meyer in his 1570 fighting manual The Art of Combat. Most of the guild’s classes focus on the longsword because, if you can handle one of those, you can use your longsword skills to feel fairly comfortable in other weapon systems.

While Historical European Martial Arts (HEMA) in the medieval German tradition might not seem like a natural fit for the outdoorsy Comox Valley crowd, the guild has been growing steadily since its launch in 2019. Currently a couple dozen devotees—male and female, ranging in age from 11 to 63—participate regularly in sessions in both Courtenay and Campbell River.

This parallels the ever-growing interest in martial arts of all kinds. There are hundreds of HEMA clubs, guilds, and schools worldwide where you can learn and practice everything from singlestick (cudgel fighting) and Meyer’s fundamentals of dagger fighting to rapier and quarterstaff.

Of course, nobody gets killed at a CVCG session. Students usually train with blunt synthetic and steel weapons, and you’re more likely to pull a muscle than sustain an injury from a sword. The classes include sparring as often as possible, so the combatants can test the techniques they’ve been practicing.

However, these blunt weapons don’t offer adequate feedback on edge alignment, which makes it hard to get a sense of the true martial effectiveness of their cuts, so, weather permitting, we take the sharp swords outside and practice cutting water bottles and tatami mats.

I joke that I started the CVCG because I needed swords in my life. After taking up HEMA about five years ago in the Okanagan, I wanted to maintain and expand my skills, and I thought people in the Comox Valley would find it as much fun as I do. Tournaments, especially, can be vivid and epic. Eventually I’d like to contribute back to a wider provincial scene by having CVCG members attend and host tournaments.

For now, I love watching my students get excited when they succeed at their first cut or overcome a cut they’ve been struggling with. I think there’s a sense of empowerment that comes from growth as a martial artist. I’m happy to be part of building a new community that emphasizes honour and respect… while swinging blunt steel objects at each other. 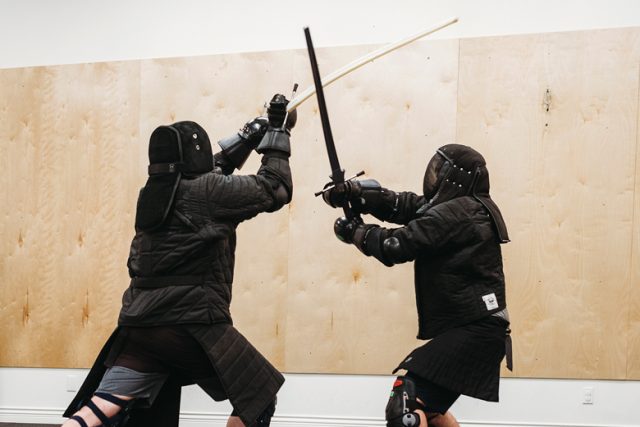