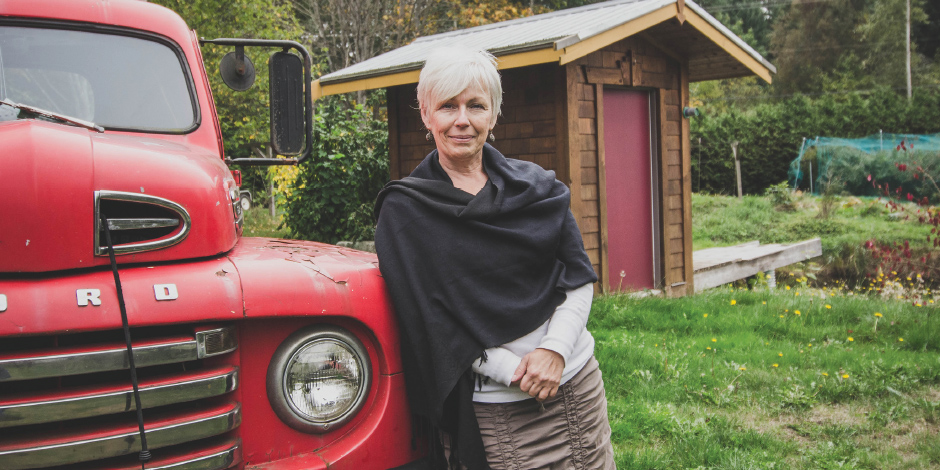 Out Of The Blue: Marla Limousin

Marla Limousin and her husband George are the fermentation alchemists conjuring up the innovative wines coming out of the Blue Moon Winery just north of Courtenay. Marla’s palpable creative energy was as present in her hospitality as much as it was in the bottle of ‘Harvest Moon’ that was enjoyed shortly after this interview.

CVC: What made you want to start making wine in the Comox Valley?

Marla: We were thinking about how to add value to our organic blueberry farm. My husband had always made fruit wines with his family so we tried making a couple of bottles. George made a blueberry wine and a blueberry/blackberry port… we gave some away to friends to try, they said we should sell it… we also did an apple wine. I thought George was crazy but that first apple wine turned out to be a double gold medal winner.

CVC: That was a good first round.

Marla: We used to live in the arctic. In Inuit society there’s no failure. It is just considered another learning thing… we weren’t afraid of anything. We both thought if it doesn’t work, so what? We threw the doors open in July 2009. Darkside (Chocolates in Cumberland) had a chocolate show and they asked us to pour wine. People loved what we served. We sold out of everything we had by December that year. Back then we had three kinds now we have eleven with two carbonated ciders going to bottle as we speak.

CVC: It sounds like you had some strong encouragement right from the beginning.

Marla: Yes we did… we have great growers and producers around here. Back then it was just Beaufort (winery) and us. Now we have Coastal Black (winery), 40 Knots (winery) and Shelter Point (distillery). All of a sudden we have this great agro- tourism destination. We’re on the map. Recently there was a big article in a San Francisco publication about the Comox Valley; we’ve seen a real increase of out of town visitors this year. People know we’re all here.  We’re all thinking about how to collaborate, market together and create spin off business.

CVC: What makes a great wine?

Marla: Love. (she laughs) You have to have a passionate wine maker. You have to have the magic and the science. Sometimes people think winemakers use the dregs to make wine but number one fruit makes number one wines. We use excellent fruit and we have great terroir around here. The cold from the glacier, the soil we have here, the quality of the air… that matters. (Terroir is the characteristics of climate, geology and geography expressed in agriculture).

CVC: What aspect of the farm do you love the most?

Marla: I love mentoring. When I moved here the farming community of this valley was so generous to me so I try to give back. When young people come onto the farm I like to share what we’ve been learning. We like to bring other people into their dreams if we can. Dreams take risk but risk can seem huge, having an entrepreneurial mind means you have to be flexible. Recently that’s carbonated cider… you have to try things. I don’t think you do things you really love without risk. Creativity sells but it’s risky. You have to experiment, sometimes that means you pour it down the drain, but you move on. I think if more people lived with innovation and creativity there would be a lot more happy people. People are too afraid to make mistakes but that’s what innovation and creativity requires. Fear keeps us from achievement.

CVC: What’s better, the product or the process?

Marla: Process. I love the gathering. George has a crate of pears out there; if I stole a hundred of them to experiment with he’d never notice. I love to try things; I love to twist it up.

CVC: What kind of obstacles have you had to overcome?

Marla: Your generation is great; they’ll try anything. You’re not worried if it’s like a Shiraz or if it’s like a Merlot. My generation is all stuck in that… there’s a perception that fruit wine is something you get from grandpa’s basement and it gets you really hung over but we’re changing that. We want to give people a new experience. In the end everyone seems to leave with a bottle. If you just get people to taste it… that’s why we’re out at all the festivals and our tastings are complimentary.

CVC: Where does your sense of excellence come from?

Marla: We’ve been married twenty years and worked together for fourteen. George is a perfectionist. He’s an engineer with Swiss parents. He’s solid. I always want to experiment and try new things. I get these ideas, I bring them to George and he lets it settle and then percolate. It’s a good balance.

CVC: How do you stay inspired?

Marla: We stay inspired by surrounding ourselves with young people. That keeps us young and keeps us connected. We’re inspired by this beautiful place, by what the Comox Valley is becoming. We’re doing what we want to do and not being inhibited. In the high arctic there was no bs. We find that here too and that keeps us inspired.

Marla: Harvest Moon. It’s so versatile. We love apples right now. There’s like nine varieties of apples in that bottle. George used brown sugar to give it that caramel overtone; we had it fortified by Frog Distillery on Hornby Island to bring in the brandy part of it. You can drink it over ice, room temperature or warm it up when you’ve just come in from skiing.

CVC: How do you define success?

Marla: Success is when a person walks through our door and they brought their friends… success is when someone takes a sip and then excitedly say “that’s not what I expected.” When we shake someone up, who thought it was going to be a certain way and its better, that’s success. When people have emailed us and said thanks for being here, you make me proud of my valley… that’s success.