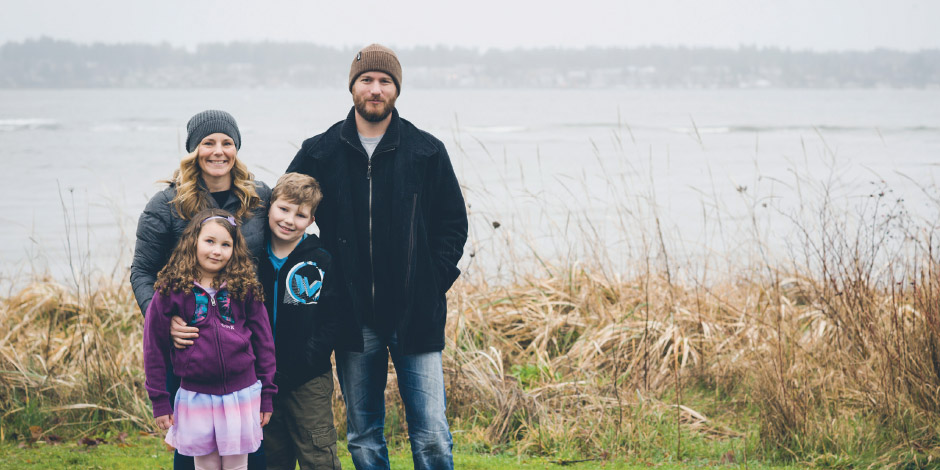 The story of cancer, community and a hospital mini fridge.

“As a family physician, death is a part of my every day at work. As a father, it was the furthest thing from my mind until Linden got sick,” says Brad Harris. “I believe in humanity, community, and the power of the self. I believe in medicine, and that sometimes you have to fight, and sometimes you need to roll over and die. I was ready to take my daughter home to die. To stand up to the medical establishment, and say, ‘No, you can’t do this to her. We’re taking her home to die.’”

To look at Linden Harris now you’d never know the truth behind the cute, mischievous smile. With curly locks, curious eyes, and the typical effervescence of a 7-year-old girl, she seems at ease with life. But life for her has been a long-term struggle.

This is the story of the Harris family, their little girl, Linden, her fight for survival, and the local beer that is that is changing lives, one bottle at a time.

Brad Harris and his wife Dennyse moved to the Comox Valley in 2005, choosing a tranquil waterfront setting in Royston as their new home. “The Comox Valley was always a magical place for me,” says Brad. “there were lots of reasons for moving here; the size of the community, the people, the mountain, the ocean, but what put it on the map for me was that The Old House Restaurant was where my parents would go for their anniversary.” Their son Max was born in 2007 and Linden in 2009.

In 2012, a friend of Brad’s asked him the innocuous question of naming a passion. He fumbled for a response before settling on beer. He deemed this to be a ‘silly passion’, but his wife and two friends unanimously agreed that beer was, indeed, his true passion. “After accepting beer as my passion, it dawned on me, for the first time, that I could brew beer.” A friend pointed him towards Charlie Papazian’s book, The Joy of Homebrewing, and after devouring the contents alongside a lot of internet research, he set out to brew some beer. “The first beer was the only kit beer I brewed. It was all right, not really terrible, but certainly not good. The second beer was an extract beer, meaning that the malt was derived from a syrup-like fluid, to which I added reconstituted water (much like a kit beer), but I also soaked so-called specialty grains in a bag, so there were some barley grains involved. The third beer used actual hops for dry hopping in the fermenter and from there I moved on to all grain brewing. The third beer almost tasted like commercial quality beer—there was still a bit of that home brew twang—but it tasted close enough to actual beer that I was motivated to continue.”

Soon thereafter, Harris found his ‘beer yoda’—Layne Rossi—on the internet. He called him up and was welcomed to Rossi’s house in Campbell River. There he watched Rossi brew, asked a lot of questions, and to his delight, got the answers. Harris’s brewing started to become more technical and the results more tasty.

Then on November 5, 2012, as Harris arrived home late from working at an evening clinic, his wife greeted him in the kitchen with news that their daughter Linden had been coughing a lot over the weekend and that she had ‘all these red dots on her face.’ Just a few days before, Linden had been out trick-or-treating with the neighbourhood kids and had seemed to be keeping up okay. The following weekend she ran a fever and was sick with a cough and runny nose, nothing too unusual. Entering her room in darkness that night, Harris checked his sleeping daughter’s face but couldn’t determine much, so he resolved to check again the following morning. “She slept through the night, without any further concerns. In the morning, I propped her up on the kitchen counter, much to her protest, to do a red dot count. There were a lot of them, and they didn’t blanch.”

Harris went off to work, performing morning rounds at the hospital. Soon he received a message from his wife to call, which he did immediately. ‘Linden has all these bruises on her legs.’ she said. They agreed to get her to hospital as soon as possible. Harris met them in the emergency department after having remotely accessed his daughter’s blood work results. Her hemoglobin was 60, a dangerously low reading. ‘Her hemoglobin’s 60, Dennyse, it’s 60!’ he wailed. His wife asked what that meant. ‘It means she has cancer, Dennyse. She has cancer and she’s going to die!’ “Those were my first words to my wife. Imagine that.” reflects Harris.

A second physician entered the room. ‘Her white count is over 100’ he said. (By way of explanation, normal is around 10). ‘Her blood is full of blasts.’ These ‘blasts’ are immature white blood cells that only show up in the blood with leukemia. “I fell to the ground sobbing. Imagining my life as a family of three. Without Linden.”

A pediatrician joined the room, and having been asked if she’d ever seen this scenario turn out well, she responded with, ‘Oh, all the time. This is readily curable. There’s a 90-95% cure rate. It’s two years of chemo and then you’re golden.”

Linden was helicoptered to BC Children’s Hospital Oncology on November 6, 2012, and started chemotherapy that same night. She had the first of 15 lumbar punctures (spinal taps) and after a harrowing month of setback after setback, it became clear that she had suffered the ‘double whammy’ as Harris explains it—Acute Lymphoblastic Leukemia and, later, a fungal brain abscess, an extremely rare complication from the treatments and cancer. “The overriding emotion was mostly sadness,” says Harris. “I never once felt angry, and I wasn’t really scared, because I knew from my training in medicine what was happening and why, so I didn’t have fear of the unknown, just the sadness of the known.”

That’s not to suggest the family didn’t struggle together, day-to-day, to cope with the enormity of the situation. “The next year, basically all of 2013, was just hard and shitty. Dennyse and Linden were gone for a lot of it. There were so many back and forth trips to Vancouver, stays in hospital, running through the various blocks of chemotherapy.” Linden was on some combination of chemotherapy medication every day for a full 2 1/2 years. “It was really hard. It still makes me cry thinking about that year. The last month of 2013 and all of 2014 was maintenance chemo—which was still chemo, but not nearly as hard. Fewer trips to Vancouver, a more normal child, easier to deal with,” he explains.

BC Children’s Hospital doubled as a hospital and hotel as a grandparent or parent roomed in with Linden every day and night. With the fungal brain abscess, she spent 35 consecutive days in hospital over Christmas 2012. Several shorter stays occurred over the next two years. YANA provided support with the costs of transportation and provided an apartment near the hospital, although they were fortunate enough to be able to stay with family in Richmond.

In the hospital room was a mini fridge stocked with the usual assortment of refreshments and snacks and, most importantly, beer. Beer, explains Harris, became comfort. “Being able to open a beer, drink from a proper glass and enjoy a moment of respite was so helpful. Just opening up the fridge and seeing a beer in there would give me a sense of peace, if only for a brief moment.” This little fridge in a scary hospital room would provide the catalyst for a profound life-altering thought.

In the summer of that same year, 2013, Dennyse’s family created Team Linden to raise money for BCCH Oncology services. “That was when I made the connection between the brewery and charity,” adds Harris. “By this point, working in the brewery had taken on even more meaning, as it was time to myself, relaxing, therapeutic. Now, with the higher purpose of raising money for charity, it became a mission.”

Blatantly ambitious, Harris is equally self-effacing. “A good story with mediocre, or even just good, beer doesn’t make it all work. It needs to be the best beer in the world. There needs to be a demand so great, with a charitable angle so compelling, that someone will happily donate a $1000 for a bottle of the beer. That’s one of my goals. That, and to raise a million dollars for charity by the time I’m 50.”

Assuming a more solemn voice, Harris reflects on the positives of his family’s journey. “I’ve realized just how important support/community is in difficult times. Communities rally together in times of crisis. Snowstorms have people digging out neighbours and pushing out cars, instead of giving that same car the finger for not getting out of the way when the sun shines. I want to turn this shit storm into something positive and long lasting.”

And that mission is playing out, as desired. Under the moniker of the Royston Nano Brewery (RNB), Harris has been busy working on making ‘the best beer in the world’, perfecting recipes and techniques in an almost exclusively, ongoing self-taught trial and error basis. His eyes are still firmly on the prize of simultaneously raising awareness of charity, cancer and community. And, at the same time, exciting the palates of beer drinkers alike.

Preliminary plans are underway for RNB to contract brew beer—most likely the Royston IPA – with local breweries. While nothing has been set in stone as yet, RNB is working on bringing a charitable beer to market with all profits donated to YANA and BCCH oncology. “I hope to start and then keep contract brewing around here for as long as the beer moves. If it takes more than a week to sell out of the first batch, I’ll take it as a personal insult,” comments Harris candidly.

Cutting to the present day—just over three years after Linden’s diagnosis—she is a happy and vibrant 7-year-old girl. “You would never know anything ever happened to her except for a scar on the back of her head where the hair doesn’t grow—from the craniotomy to suck out the fungus from her brain abscess,” says Harris matter-of-factly.

Around him, as the Royston tide ebbs and flows in full view of his home, there is laughter and joy in the air. Linden and her brother, Max, play. Dennyse is content. Life, as unpredictably earth-shattering as it can sometimes be, is smiling in all its wondrous beauty. 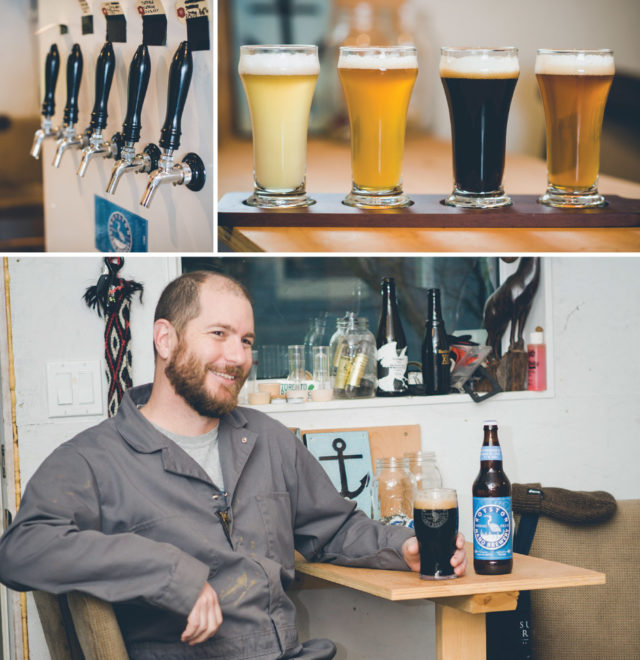