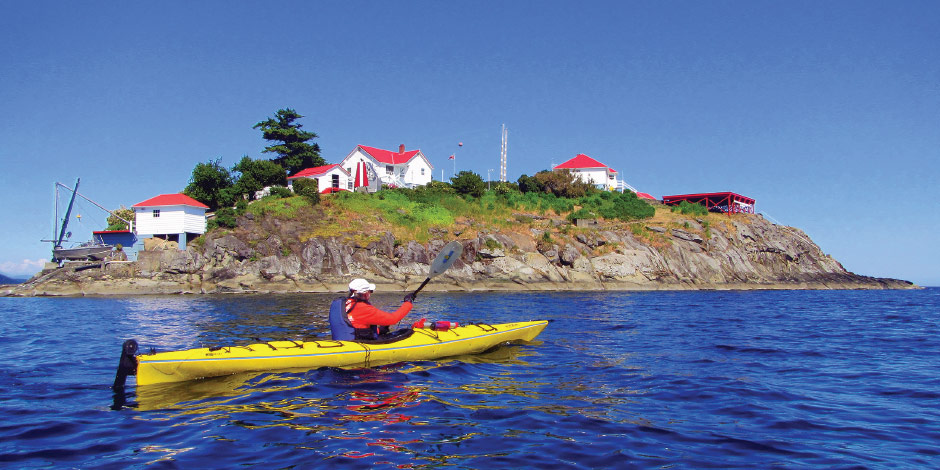 The joy of kayaking in Baynes Sound.

The most profound way of connecting with myself and with the natural world is through kayaking. Part of the experience is simply being on the water, but part of it is the opportunity to explore in a way that only a kayak allows. Paddling out and staying parallel to the shoreline doesn’t always inspire. Islands, even the smallest, change everything. With islands comes a sense of destination, challenge, and adventure.

As a novice kayaker working to extend boundaries, my destinations generally involve Denman Island. For most of its length, Denman is between 1.5 and 2km from the shores of Vancouver Island. This means a short trip in waters that are more or less sheltered from the prevailing winds of Georgia Strait—good learning conditions.

In the Comox Valley, anyone can get themselves to a shoreline in 15 minutes. I head for Royston, Union Bay, or Deep Bay as these short drives maximize my time on the water. There are many water-access points and putting in a kayak is rather easy. Once on the water, I snug up my spray skirt and feel ready for a journey. From that moment, I’m connected to my kayak and to the ocean. In a kayak, the closeness to the water means heightened sensitivity—you’re one with nature. I find myself much closer to wildlife than I ever managed in a canoe, usually accidentally, since animals like otters and sea lions pop up not knowing that a kayak is right there.

Heading out from Royston, I often take my inexpensive kayak (the hardware store variety) and head for the Royston Wrecks. I take my snorkel gear along because the artificial reef teems with life both above and below the waterline. The ships that were sunk to create the reef are full of jagged pieces of metal, sometimes only just hidden below the surface. They’re a danger to larger, more expensive boats and to the human body, so I proceed with caution slowly and carefully.

Most shorelines from Comox to Union Bay, reveal the faint image of Tree Island in the distance. It seems so far away and yet 45 minutes of paddling has you bumping onto its steep, sandy shores. Incidentally, you can’t find Tree Island on a map. Although we locals call it that, its official name is Sandy Island Marine Park. While it is semi-attached to Denman Island, it seems to be a microclimate with different types of vegetation lying low to the ground and big hefty conifers to oversee them.

Paddling out from Union Bay toward Tree Island, you can hear the sounds of the sea lions that reside near the old docks. Sometimes, when the water is glassy calm and the sky is clear and bright, the hills reflect off the black water. Other times, winds blow from the southeast into Baynes Sound and waves constantly buffet the kayak and wash over the bow. Foggy days are perhaps my favourite when near silence surrounds you, broken only by the cry of distant sea lions and the occasional hum of a power boat. Stopping near the half-way point and looking to the shore ahead and behind, I can sometimes make out the hazy shapes. On several trips, I’ve seen groups of harbour porpoises—and it’s always a wonderful encounter. They’re quiet and unassuming—announcing their presence with abrupt gasps as they surface for air. On peaceful paddles, it can be a bit of a shock when one of them does it close to you. One by one they surface, grabbing a lungful of air in their characteristic no-nonsense cartwheel roll, only to disappear with their group to continue to hunt and feed.

Deep Bay offers excellent water entry at Mapleguard Point. Drive to the end of the peninsula where you can easily put in a kayak, regardless of the tide, because it’s steep and sandy. Paddling from here is a treat, offering great choices once you head out onto the water. You can enjoy a sheltered paddle around the bay and marina, or head out of the bay and right across to Repulse Point on Denman Island.

From there you can travel north or south following the shore. Heading south you quickly come to Boyle Point Provincial Park—where its steep hillside eerily overhangs the beach, its trees and clinging vegetation emphasizing the feeling of escape from civilization. As you reach the point, the separation between land and sea is abrupt with cliffs reaching up from deep water as you move around the corner to face Hornby Island. Tiny ‘secret’ coves offer fun for photographers and great places to picnic. On a first trip, the next stop should be Chrome Island, with its lighthouse dating from 1891, and cormorants that decorate the cool looking jagged rock formations.

The next stop is Hornby. Although many think it’s daunting, it’s not a big deal to make the crossing as long as conditions are good—even beating the ferry! Just 30 minutes of paddling takes you to Norman Point on the southeast tip of Hornby Island. Another 30 minutes beyond that lies Tribune Bay.

Fabulous rocky beaches full of wild shapes and formations can be found along this stretch, as well as islets—often covered with sea lions that mimic groups of urban youth boisterously warning you to steer clear of their turf. They’re really quite ridiculous, but succeed in making you think they might just do something rash. For kayakers looking to extend their range and comfort zone, and to find wonderful sights and sounds, a short drive leads to wonderful adventures that will have you home in time for supper.

Pristine beaches, distinctive rock formations, a wealth of marine mammals, and excellent water conditions (depending on weather) are within your reach when you live in the Comox Valley.