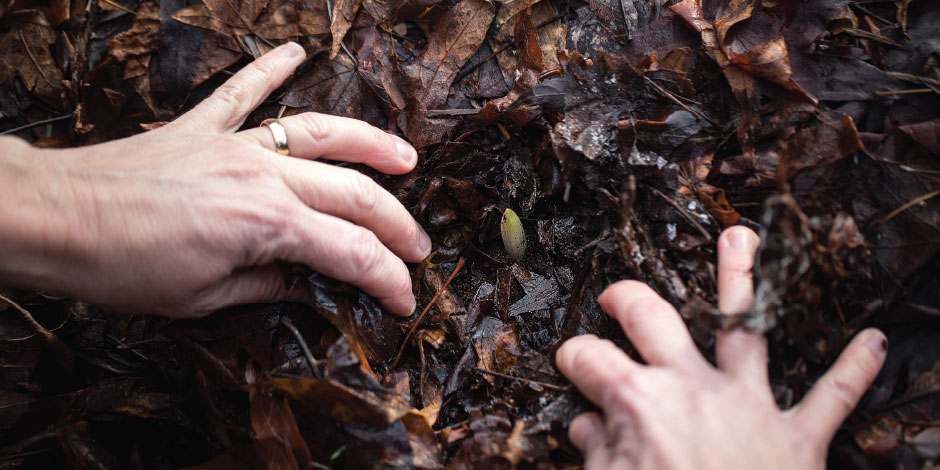 Photos by Re Bastien

How a drive to be independent and self-sufficient unexpectedly led to community connection.

Both of my parents emigrated from Europe to Canada soon after WW2. People of the Netherlands, like other Nazi-occupied countries, were struggling to recover after the devastation of war. During the immediate years that followed, the Netherlands government encouraged citizens to leave, and between 1946 and 1968 the Dutch were the fifth largest group of immigrants to Canada. A prudent Calvinist idealism combined with the experience of wartime scarcity produced an especially thrifty group of newcomers. I was born to a community of Dutch immigrants near Toronto, and their “frugality is next to godliness” doctrine was passed on to a whole new generation of Canadians. I feel proud each time I mash two tiny soap pieces into a larger one capable of at least three more showers.

My mother didn’t have time for a vegetable garden while working and raising three children on her own. Yet we frequently spent Saturdays readying food for the chest freezer. Cutting and blanching bushels of green beans, turning u-pick strawberries into jam, pureeing windfall apples, or prepping and cleaning the smelts my uncle caught. I can still see the little smelt bladders floating in the sink. The need to conserve our limited food budget pushed our family toward self-sufficiency.

In recent years there is growing concern around the untenable methods of industrial food production. While there are beneficial advancements in food management, the routine use of unsustainable systems is troubling to say the least. This discomfort with the status quo drives a growing ambition to recover the skills and knowledge my grandparents had surrounding food. That yearning, combined with the appealing notion of self-sufficiency, renewed my desire for a garden. Fostering independence has helped me to navigate difficult situations in my past. I hoped that my garden would provide another avenue to exercise this virtue.

The notion of self-sufficiency conjures rustic, Grizzly Adams-type images, off-the-grid living, and hand pumping daily water rations. Or heaven forbid, composting my own feces. How is it defined, and was it a lifestyle I was truly ready for? Initial research brought me to the conclusion that self-sufficiency means surviving with no outside assistance, a definition I thought I could get behind.

First, I had to build garden beds. What style is best for our climate? What is the ideal size and height? I embarked on a journey of humble learning. After weighing the pros and cons I built two four-by-eight foot concrete cinder block raised beds in the sunniest area of the yard.

Except that I didn’t actually build them, my partner did.

He spent hours purchasing and hauling blocks, mixing cement, and carefully and precisely assembling them. He then brought home a full trailer of garden soil and wheelbarrowed it to each bed. This was supposed to be my project.

I had to learn where to get seeds, when to plant and how to sprout them, and how to harden them off (who knew?). I had to learn when to transplant them, what the best fertilizer is, how much to apply, and when. The amount of knowledge required is immense. Much of this vast wisdom is traditionally passed down from one family or community member to another. It happens in a natural way, simply by doing: tending the garden or being on the estuary, children lending tiny hands to assist the adults in providing. This is an entirely separate style of learning than many of us are used to. Our compartmentalized, modern lives often fail to provide the opportunity for active, practical learning. How much can one person learn alone, and how far can a single person stretch the notion of self-sufficiency?

I struggled, and it felt as if each answer I found lead to further questions. Too much rain fell. All season long, pill bugs appeared by the hundreds, eating the living material as well as the decayed. And the slugs came. There were online communities filled with knowledgeable, sharing people, but the process felt solitary. Once I began having small crops to harvest, I needed to learn what to do with my bumper crop. One can only eat purple peacock beans as the featured dish so many times. The garlic, beans, peas, and herbs were wildly successful.

Learning what to do with extra beans by watching YouTube videos felt sterile. I needed to reach out and depend on the knowledge and skills of other people within my immediate community.

I signed up for a canning class from Lush Valley with Lynda Smith and learned how to make pickles. I took a garlic workshop from Arzeena Hamir in support of the Vanier Garden. I learned that my garlic thrived by fluke, as I planted the bulbs in the spring, rather than the fall. I’m learning how to save seeds and how important preserving diversity is from the CV Growers and Seed Savers. The ripple of this process is reaching other parts of my life, as I’m now learning how to sew and design my own clothes with Nicole Bertram at The Spool Sewing Studio. While I consider myself to be a resourceful person, adding these skills is enormously satisfying. It is empowering as an adult to take on new proficiencies and uncover hidden capabilities.

Through the process of learning the skills of independence, I have also learned that there are many caring people in our community who have a passion to support others in their efforts to do better, no matter how small these efforts may seem. There is a collective interest in making a difference for the sake of our immediate community and surrounding land. It’s not each of us hunkered down in a cold, disconnected dystopian nightmare. We can approach it without fear of committing to an overwhelming lifestyle. I like to think of it not as self-sufficiency but sustainable living instead. An idea we can pick up and nurture in fragments. That we can learn at our own speed while relishing the process.

I have much left to learn. It’s not necessary for me to carry the world’s burdens, but there are things I can do, and these things matter. In turn I have new knowledge to contribute, food to share, and love to give to others. My grandparents would be proud.