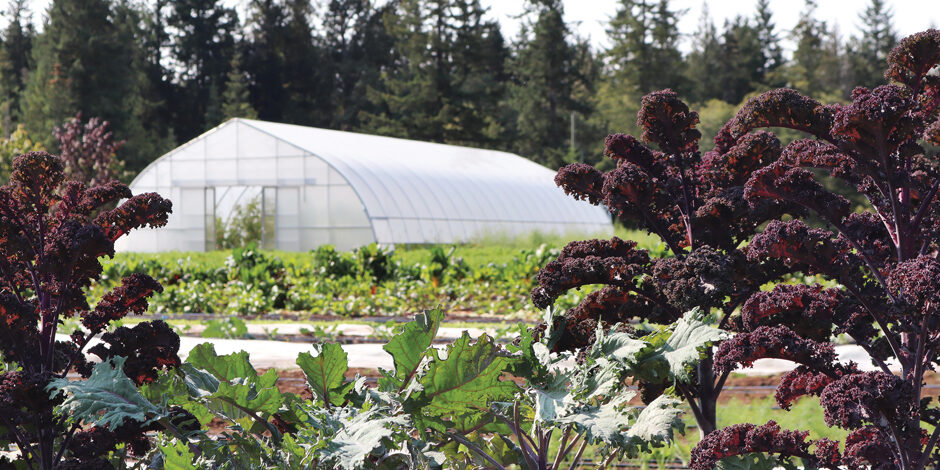 Land-matching program nurtures the next generation.

Sarah Wilson always loved her veggies, even as a kid. She attributes the craving to growing up in Rivers Inlet, a remote, very rainy, and now mostly abandoned village on the central coast of British Columbia (BC). Food came in by barge every couple of weeks, and “rather overcast” weather stunted her mom’s attempts to supplement their diet from a greenhouse.

“The result was a bunch of kids with an intense appreciation for vegetables,” says Wilson.

None more than herself. That appreciation took her to school for horticulture and then on to working on farms in Metchosin and the Comox Valley. It was all training for her dream of starting her own farm.

There was just one problem: like many farmers, Wilson can’t afford to buy land.

Since 2007, the price of Canadian farms has increased by about 150 per cent. In 2019 alone, an average acre of Vancouver Island agricultural land increased in cost by 13 per cent, to $57,500.  Production costs, like seed, fertilizer, and machinery, are headed in the same direction—making the economics of farming tougher than ever. In 2013, more than two thirds of an average farmer’s income in Canada came from off-farm work, and things have only gotten worse.

Despite the challenges, it is possible to run a profitable farm and there are people, like Wilson, who want to try despite the daunting obstacles they face. Farming requires massive upfront capital costs and has the same potential failure rate of any new startup. What’s more, two thirds of today’s aspiring farmers didn’t grow up on a farm, which means they lack the experience and knowledge traditionally passed down from farming parents to kids.

Add it all together, and it’s no shock that BC lost more than 2,000 farms between 2011 and 2016. The current average age of a farmer in this province is just under 60 years old. We’re not growing enough farmers to fill the old gumboots. And that’s a problem.

The more food is grown locally, the more resilient a system is to threats (like climate change, political unrest, pandemics, or all of the above) in the global supply chain. And we need to hold on to healthy farmland that locks away carbon dioxide, making agriculture key to cooling a warming planet.

“If we want future farms, we need to recruit new farmers,” says Sara Dent, executive director of Young Agrarians, a farm-startup program launched in BC in 2012. “We need to invest and nurture the next generation.”

The program started as a resource to help new farmers connect with mentors and peers, access learning opportunities, and find advice on the intricacies of starting a farm. In 2014, Dent learned of a program in Quebec that matched would-be farmers with owners of  unused land. That province viewed revitalizing farming as a way to kickstart declining rural economies. Young Agrarians started a similar pilot program in BC, helping landowners and farmers connect and sign lease agreements, and the newly elected NDP government took it province-wide in 2018. The BC Land Matching Program completed its 100th match in January 2021.

“The number-one barrier to new farmers is access to land,” says Dent. “But there are a lot of technical challenges, too.”

Often Young Agrarians’ most important role is to grease the wheels of the owner-farmer relationship. Take Sarah Wilson’s match, for example, which started when Ankia and Stefan Kriegler bought 10 acres of hayfields north of Courtenay in 2017.

“We had a romantic vision to give back to the community,” says Ankia. “We’re city people. We could never farm on our own, so the idea was always to give someone else a chance.”

On their own they leased 1.5 acres of land to a farmer, but the relationship didn’t go well. After a season, they and the farmer went their separate ways. Then, through mutual farming friends, the Krieglers connected with Wilson. “I was a bit gun-shy after our first experience,” Ankia admits. And Wilson had never signed a land lease before. So they asked Azja Jones Martin to join them. Martin’s title with Young Agrarians is “land matcher,” but it could also be “counsellor and business advisor.”

“Having Azja at the first few meetings helped me verbalize what I wanted to get out of the match,” says Ankia.

Beyond breaking the ice and making sure the two parties were a good fit, Martin brought sample lease agreements and checklists of everything the Krieglers and Wilson should discuss, which was a huge help to all.

“The majority of the provisions I had no clue about,” says Wilson.

In the summer of 2019, they signed a three-year lease for 1.5 acres of gardens, a greenhouse, and part of the farmhouse. Wilson dug away at establishing Pendleton Farm and the Krieglers helped, adding infrastructure like a wash station for cleaning produce and cold storage for keeping it fresh.

In 2020—the first full year of operation—the farm flourished, and so did their relationship.

“We’re on the same wavelength,” says Ankia. “It’s the best feeling ever to see the farm producing.”

Wilson sold her crop of mixed veggies via subscription boxes, at farmers markets, and to local restaurants (Locals, Toscano’s, and COOKS).

“It’s gone better than I expected, but it’s a steep learning curve,” Wilson says with a laugh. “I knew farming, but I’d never done the business side before. There’ve been a lot of surprises, but I’ve been very lucky. The farming community here is amazingly helpful.”

For the summer of 2021, Wilson hopes to grow the subscription box program, add a permanent farm stand, and gain organic status. It’s a lot of work (she’s often in the fields with a headlamp on), but it’s everything she dreamed it could be.

“I love each step of the growing—the physical side of it, how there is always something to learn, the ability to see the results of your time and labour—and it’s rewarding to be able to share something you value so much with the community,” she says. “Also, I get to eat all the veggies.”