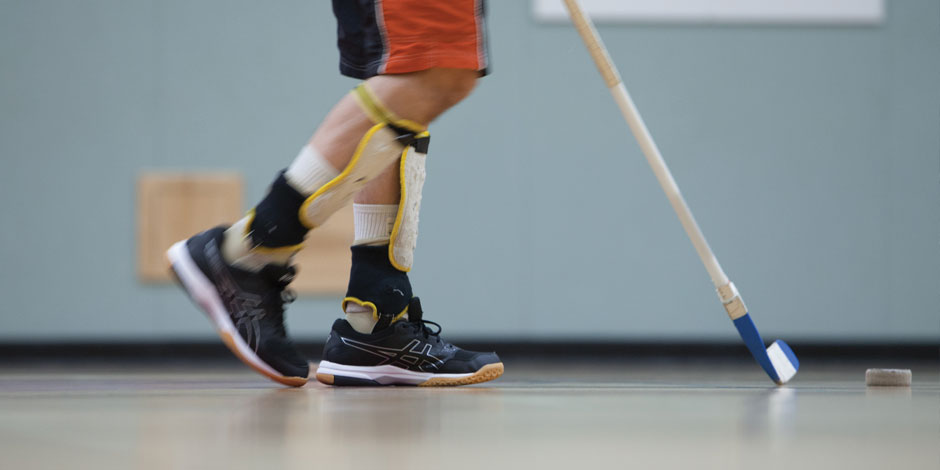 A lot of change comes with the passing of multiple decades, but a committed gathering of floor hockey players shows that some good things stay the same.

Walk into any garage in Canada and you’re likely to find a hockey stick or two, tucked in a corner or shoved upside down in a barrel alongside brooms, rakes, and other long-handled implements. Even if you never set foot on the ice as a kid, as part of your Canadian heritage it’s required that you have a wooden stick at the ready when the kid across the road drags his nets onto the street and yelled, “Game On.” Hawksley Workman said it best when he sang, “Hockey is the language that we all can understand.”

When I first arrived in the Comox Valley almost 15 years ago, I heard rumours of friends who’d been playing floor hockey together since the 80s. It originated as a group of teachers and their friends who gathered every Tuesday night in the gymnasium at Robb Road. Nearly 40 years later, this now infamous group can still be found swinging plastic sticks at felt pucks, and sometimes at each other, at an undisclosed location in Comox.

They pay for their rental space and occasionally purchase new sticks and gear with their unique system of fines. Part of the losing team? That’s a fine. A little too rough in the corner? That’s another fine. Score the winning goal? Yep, that’s a fine too. The pot has been large enough in the past to send players to Honduras one year and Costa Rica the next, with enough left over at one point to buy a small boat.

I was told that once you’re in, you’re in for life—or at least until you move away, pass away, or reach a point in life when sprinting into the corner with someone half your age is no longer intelligible. I once received the text “NOWAK. Floor hockey tonight. Bring shin pads and small bills. In or out?” Suffice it to say, I’ve been in ever since.

The secret to this particular game’s longevity is a bit of a mystery to me. Some say it lasted because fighting isn’t tolerated, or because the teams change every week so rivalries between players are quelled before they begin. And despite the shenanigans that happen on the hardwood, hurt feelings always fade by the second pint of beer. Perhaps it’s the fact that our town is small enough that you’re likely to run into someone who will easily goad you into coming back, week after week. Maybe we’re simply trying to reclaim our long-forgotten youth or satisfy some primal desire. Whether hockey is the reason or the excuse, we keep coming back.

Were it not for the game, I wonder if this group of friends would have otherwise connected. Some went to high school together, and some had kids that were in the same classes. Others played in a band with each other, and some of us just happened to be invited once or twice when numbers were low and have since been welcomed into the fray. My dad once explained that you could tell a lot about a person by the company they keep. Through all the highs and lows that life throws at us—marriage, and divorce, births and deaths, illness and recovery—heads are shaved, hugs are had, fists are pumped, and the band plays on.

So who are they? Chances are you know at least one of them, but I’m not going to tell you who. They were probably the kids who dragged their nets into the streets and told you to grab a stick. Game On.