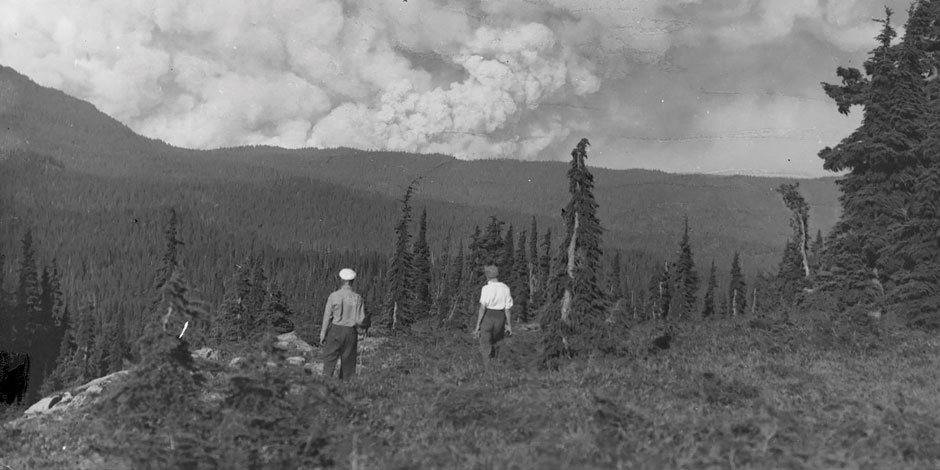 On a hot summer day in 1938, a few sparks from a locomotive caused Vancouver Island’s largest blaze.

“All along the way, where the deep green forest used to stand, lies a waste of mangled trunks and branches, enough wood to keep your fires burning for a thousand years or so.”

Journalist Bill Hutchison looked out at the logged land around Comox Lake in April 1933, and wrote these prophetic words later quoted by Richard Somerset Mackie in his book Island Timber.

For many decades, standard logging practice in the area was to send the best timber to the mill and leave behind all the smaller, imperfect forest debris as slash. Thus the stage was set for the Great Fire of 1938. Also known as the Bloedel Fire, it was the biggest recorded fire that Vancouver Island has ever seen.

On July 5, 1938, a spark from a “locie” at Bloedel, Stewart and Welch (BS&W)’s forestry operations north of Campbell River lit up a tinder-dry cold deck (log stockpile), igniting an epic burn that would last for 43 days. BS&W had continued logging in defiance of a mandated shutdown during an extended hot spell and high-fire-hazard period.

The fire swept across and down the Island, jumping lakes, crossing streams and highways, and burning railway bridges. Future crops, logging jobs, and lush forest spaces went up in flames. Families were evacuated into Courtenay from farmsteads on the outskirts of Courtenay and Cumberland (including the Merville area, which had seen a significant fire in 1922) and workers were sent home from logging camps or put to work as firefighters.

At its peak, the creeping inferno was spreading its fingers at 7 mph; it reached a maximum width of eight miles. Over 2,500 labourers (some willing, some not) battled the blaze for 25 cents an hour. Volunteers came from as far down-Island as Victoria and across the water from Vancouver.

Fire-fighting methods ranged from full on “man”-power to constant prayer vigils maintained in Campbell River, Vancouver, and Victoria. Also in Victoria, a Salvation Army Band concert on Day 25 and a vaudeville show on Day 28 by a variety theatre company from HMS York were among the events organized to raise funds for evacuees.

Newspapers and eyewitnesses described variously dark skies with shades of purple, grey, and orange; snowstorms of ash; and flakes dropping like swarms of bugs. Fishing boats ran aground, their captains unable to see in the thick smoke, and planes couldn’t fly. Visibility was greatly reduced as far as Victoria and the Lower Mainland, with reports of ash falling as far as Manitoba.

Following heavy rains on August 17, firefighters finally declared the fire out, but not before 74,495 acres of land had been burned. Around a quarter of this was “merchantable timber” and just under half of it had been previously logged and burned—a fact that clearly highlighted the need for better forest management practices.

Ironically, new provincial regulations requiring pre-emptive annual slash burns had been imposed on logging companies earlier that year to prevent such an event from happening. The arrival of these stricter regulations was tragically too little, too late. By the time the last flame was snuffed, reportedly five billion board feet of timber had been lost, the equivalent of 10 million “man”-days of work, according to the Forest Service.

While hot, dry weather was a catalyst for the Great Fire of 1938, inadequate forest management policy and negligent forestry operations were key underlying factors. Although reforestation practices have evolved over time, it is clear that many management concerns remain.

Canada’s forests have become a net emitter of carbon, largely due to disturbances such as forest fires. Sustainable forest management and the protection of remaining old-growth trees as vital carbon sinks are critical to our collective well-being.

An intact functioning forest ecosystem can be a place to work, but it can also be a place for joyful exploration and for biodiversity to thrive. We should question our relationship with the forests from which we derive great value. If we are to avoid Bill Hutchison’s haunting forest premonitions, it may be worth asking ourselves if we can be striking a better balance.

Note: I am indebted to John Parminter’s excellent day-by-day account, “Darkness at Noon: The Bloedel Fire of 1938,” which provided valuable insight into the causes, events, and aftermath of the fire and from which I drew many of the facts for this story. 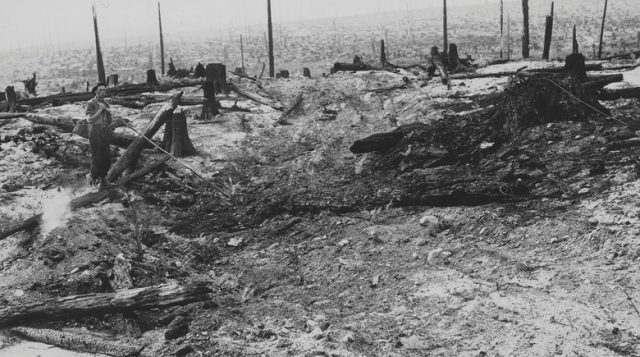