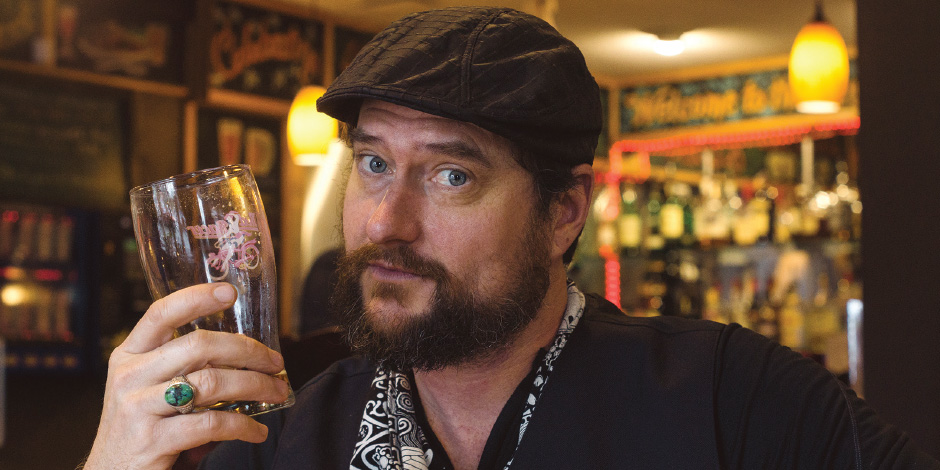 Interview and photo by Ross Bodenmann

Whether it’s hanging out with High Lamas in the Himalayas, studying palaeontology in Drumheller, hosting poetry slams, or picking his girls up from ballet, the uncompromisingly creative Kevin Flesher would certainly give the Dos Equis guy a run for his money.

CVC: Give us a bit of your story.

Kevin: My mother was a teacher with the Inuit in the early ’60s; she married my father, who was a quadriplegic teacher—he’d caught polio at age 21. They had two sons, my brother Brent and me. We were raised as boy scouts and spent summers canoeing and riding fences at the family ranch. Somehow, I was bitten by the stage bug and went into theatre, where I began to pursue my passions. I worked as a performer in musical theatre and then spent a year in the caves and ashrams of the Himalayas. Since then, I’ve gotten married, had kids, and bought a house, but poetry has always been an outlet and refuge for me.

CVC: What has being named Comox Valley’s Poet Laureate meant for you?

Kevin: It’s meant that poetry is the first thing I reach to, creatively. When something inspires me, I’m turning to poetry as my weapon of choice. It’s been wonderful—a validation and a good excuse to write more. If it’s been about anything, it’s been about creating occasions for people to come and write together and to not be intimidated to do it. While I’ve been Poet Laureate, we did a poetry pleasure cruise where we drove a limousine around Denman Island and Hornby Island. I came up with Bacon Slam—we’re about to do our third one—it’s a poetry slam where the prize is a pound of Tannadice Farms bacon. We just did the first ‘Haiku Night in Canada’ at the White Whale and the School District 71 poetry contest, where we gave out cash prizes and published a book of student entries, and we’re doing another one this year.

CVC: How did you end up in the Comox Valley?

Kevin: We were living in Drumheller; I was working as an educator at the Royal Tyrrell Museum and my wife was teaching math. I had a saloon band called the Plaid Stallions, a nice house, and dinosaur bones. But one day my wife just exploded with a burning desire to move to Vancouver Island. We quit our jobs and never looked back. When we got here, I was fortunate to get a gig as a grizzly bear safari guide with Knight Inlet Lodge. Out of the Cretaceous and into the wild.

CVC: What have you been working on lately?

Kevin: Captain Thunderpants. He’s an intergalactic secret agent. As you may know, when a star burns out it blows up that whole solar system. Solar systems are populated all over the universe. He (Captain Thunderpants) works for this refugee agency that helps relocated species that would otherwise be wiped out and he has to stop the unassailable cephalopods from devouring the earth with the help of a couple dancing bears, who are also secret agents—and that’s just scratching the surface.

It seems like I have always been interested in making up and telling stories; I can’t think of a time when I didn’t. Lately I have been working on the epic tale of Captain Thunderpants and getting my two last collections of poetry together, ‘Bill’s Toupee’ and ‘Confessions of a Colossal Superdouche’.

CVC: It sounds like you’re wearing a lot of hats.

Kevin: I started this band the Dukes of Dodge, I perform as Captain Thunderpants, I’m a full time music teacher on Denman Island, I’m raising a family, I’m vice president of the Cumberland Culture and Arts Society, I help run the North Country Fair in Northern Alberta, and I’m a Poet Laureate.

Amidst all of it, I love live performance. It has a magic to it. It can either be disastrous or sublime. When you’re doing something you love, you’re laying the train tracks in front of you while you’re going full steam ahead.

CVC: That sounds like a lot of your life.
Kevin: It feels like it. Making it up as I go along. If I have any special gift or skill it would be bringing a fresh perspective while not being afraid to fall on my face. I’ve fallen enough times that I’m not afraid, that’s how you learn.

CVC: You seem like a guy who’s not afraid to take risks.
Kevin: When people are ready to die they don’t regret the things they did as much as the things they didn’t do. They say, “I wish I would have done this or that,” more than they ever say “I regret…”

When I was 21, I hitchhiked barefoot around the Himalayas where I hung out in caves, went to the Dali Lama’s birthday party, and sang in front of 30,000 monks and nuns at a tantric initiation. I did that trip with money I made from doing dinner theatre in Edmonton. I almost bought a cool, old BMW instead of going on that trip. If I’d made the choice to buy the car, I’d be a completely different person.

Since then, I’ve accumulated so much life. A house, a wife, kids, and it’s all part of the adventure and the learning journey.

The Comox Valley Community Arts Council holds a contest at the beginning of each year to select the next Poet Laureate. Visit comoxvalleyarts.org for details.