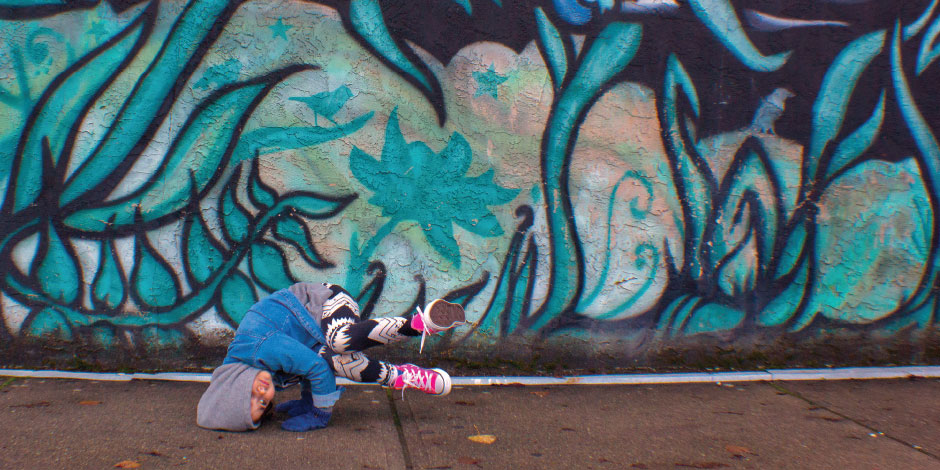 A longtime admirer of hip hop dance gets out of the corner.

If you’re of a certain age, you’ve likely watched Flashdance. As a full-blown Gen Xer, I’ve watched this iconic 80s dance movie countless times over the past three decades, along with Dirty Dancing, Fame, and Footloose. There are plenty of memorable moments throughout the movie, like Alex’s chair scene on stage at Mawby’s Bar—but one stuck with me from adolescence to adulthood.

In the scene, Alex and Jeanie stop to watch two young breakdancers pop and pantomime on the sidewalk, followed by other street dancers who execute fast footwork and fantastic freezes in front of the gathering crowd. Flashdance was the first commercially released film to feature breakdancing and I was, along with many other kids my age, awed that people could move their bodies this way.

My lack of coordination and numerous failed breakdancing attempts keep moves like pop and locking and the 6-step out of reach, yet I remain dazzled by these abilities and admire crews and breakers from a quiet distance. Despite my shortcomings, I decided to try a hip hop class. My daughter’s enthusiasm for this unique incarnation of dance was contagious. While doing a little research beforehand, I found that the history of hip hop dance is as fascinating and nuanced as the dance moves themselves.

Hip hop dance evolved from breakdancing, one of the four main elements of hip hop culture, along with DJing, MCing (rapping), and graffiti art. Breakdancing was born from the block parties happening in the Bronx in the 1970s. At these parties, DJs began extending the percussive breaks of songs— the breakbeat—so dancers could demonstrate their skills. The first DJ to do this was Clive Campbell—better known as DJ Kool Herc, the Father of Hip Hop. Herc would combine multiple tracks, sampling from artists that include James Brown and Booker T. & the M.G.’s. Since the dancers moved to his breakbeats, they became known as break boys (B-boys) and break girls (B-girls).

Improvisational in nature, breaking allowed the dancer to move as freely as their skills and emotions allowed. Every move had meaning attached. It was a test of athleticism, attitude, originality, and dominance. B-boys and B-girls would dance (battle) against each other to earn pride and respect. This was a creative non- violent alternative to the prevalent gang violence taking place at the time. It was also seen as an alternative to disco’s increasing popularity, and is one piece of the vastly complex culture that came to be known as hip hop.

When the time came, I arrived to the studio in my favourite pair of high tops, a baggy tank top, and leggings. The front of the room was covered with floor-to-ceiling mirrors and speakers stood in the corner. Other dancers started to trickle in. My hands were sweaty. The instructor entered the room and I realized that things were about to get real.

The beats started to drop and I immediately got lost in the music, bobbing my head and singing along with what lyrics I knew. We moved through basic steps that eventually worked their way into a short pattern. I did my best to keep up.

For the most part, the class remains a blur. But I do know that my stomach did flips when I ended up at the front of the class, and I seriously contemplated making a break for the door when I could no longer keep track of the steps. At one point I looked up to see my own huge grin reflecting back at me.

Despite my initial fear, I left bits of my inhibition on the dance floor that day. I walked away feeling recharged, and even a little masterful.