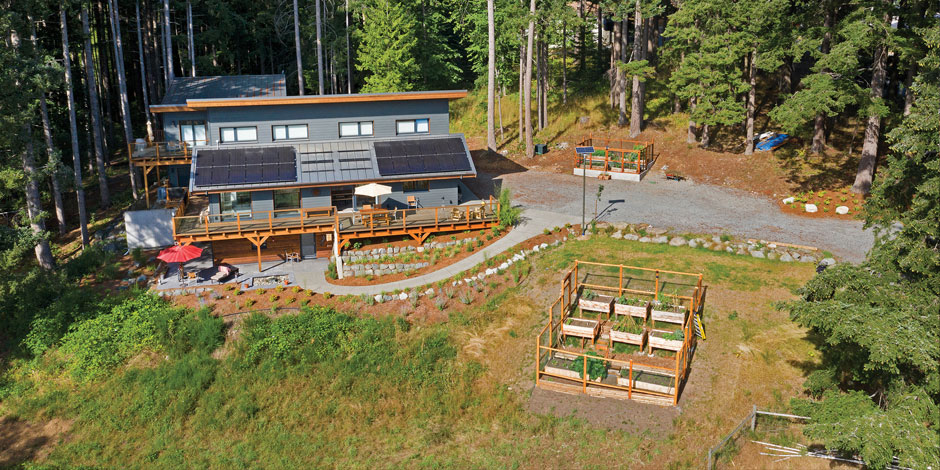 PUTTING THE SUN TO WORK

From the expansive windows of Courtenay resident Tom Grimmer’s dining room, the Comox Valley is laid out below like an E.J. Hughes painting.

Inside, the feel is quintessentially West Coast modern. The finishes are tranquil—polished concrete floors, white walls, the glow of Douglas fir posts and beams. Just below the range of hearing, the heat-recovery ventilation (HRV) system pumps out a continuous flow of fresh, conditioned air.

I dropped by one afternoon to learn about Grimmer’s house, one of the first certified Passive Houses constructed in this area, and one that has generated quite a buzz, thanks to its owner’s willingness to give tours and share what he has learned.

Grimmer is a recent arrival in the Comox Valley. Born in Quebec City and raised in Thunder Bay and Edmonton, he has spent much of his working life in Asia, but has always had the intention of retiring in BC. Since arriving here, he and his wife, Hui Li, have been behind-the-scenes—but much-appreciated—supporters of local environmental initiatives, including the Cumberland Forest and Kus-kus-sum.

He first encountered the Passive House (PH) concept in George Monbiot’s 2006 book Heat, where it was touted as a way to significantly reduce carbon emissions from buildings—the source of up to 35 per cent of global greenhouse gases (GHGs).

Struck by this simple premise—that it’s possible to build a home so energy efficient that it can largely be heated by the body heat of its occupants, their appliances, and the sun—Grimmer made a commitment to build his own home that way.

In preparation, he took a Passive House design course and kept his eyes open for the perfect lot. Site selection is important. The ideal location faces south, has shade to the west for protection from the hot afternoon summer sun, and is sheltered from north winds. When Grimmer thought about where to build, the choice was obvious: the south-facing slopes of Courtenay’s Valley View neighbourhood.

A Passive House differs from a regular house, he says, like a Thermos differs from an ordinary glass. Like a Thermos, a Passive House has continuous insulation without “thermal bridges” (essentially leaks where heat flows out). It’s airtight, to control leakage into and out of the envelope. High-performance windows and doors further reduce heat loss and unwanted solar gain; an HRV system provides fresh air; and there is a minimal heating/cooling system.

He found the ideal property in 2016 and began to design his new home in collaboration with a team of BC-based professionals. Grimmer provided the original ideas; Passive House consultants Patrick Sullivan and Tomaž Stich developed the building envelope, timber frame design, and technical details and created the drawings; and Megan Trumble designed the interiors.

At that time, construction was booming and it was difficult to find a builder familiar with PH systems and techniques who was willing to take on the build. Grimmer became more actively involved, taking on much of the general contractor role to get the house built.

A number of the home’s most important elements were brought in from elsewhere: windows from Slovenia, HRV from Germany, insulation made from recycled glass in the US, and timber frame structure and 12” super-insulated wall panels from Squamish. However, most of the home is built of BC softwood, a local and renewable resource, a fact of which Grimmer is particularly proud: “Canada is a nation of forest products.”

After 18 months of construction, the Grimmer family moved into their 2250-square-foot home in March 2019. Construction costs averaged out at just over $300 per square foot, about the cost of good-quality conventional construction.

A prominent feature of the home is its 7-kW solar photovoltaic (PV) array. Given the house’s miserly energy demands, the panels put the home in a net-positive situation, meaning it generates more power than it uses. It also earns the house the designation of Passive House Plus (PH+) from the International Passive House Institute (PHI) in Germany—only the fifth PH+ in Canada, and the first on Vancouver Island. Another benefit: by using the PV system to charge his electric car, Grimmer will cut the payback period on the panels down to five years.

Reflecting on his experience, he observes, “You need to have the first movers, the ones willing to do the learning and show others that it’s possible.” He is confident that his next project—two Passive House dwellings on a shared lot in Courtenay—will further demonstrate that healthful, comfortable, and beautiful homes that cost little to heat can be built at prices comparable to standard construction.

While Grimmer is happy to be a trailblazer in a field he’s passionate about, he notes, “Anyone can do this; it’s just a matter of educating ourselves about different ways of building.” Prices will come down, he believes, particularly as domestic suppliers begin to manufacture the crucial components in Canada and as tradespeople learn the specialized skills needed.

This is not unrealistic thinking: since 2018 the BC STEP Code has mandated increasing levels of energy efficiency in new homes. By 2032, every new home in the province will be required to be “Net Zero Ready,” essentially a near-Passive House. When that day arrives, many more residents will be enjoying the economy and comfort of this new type of home, while supporting the Canadian forestry industry and cutting their carbon footprint in the process.

Sometimes we encounter ideas that just seem so timely, so simple, so right, that they change the course of our lives in a positive, new direction. It is Grimmer’s hope that many others will follow him down this path. 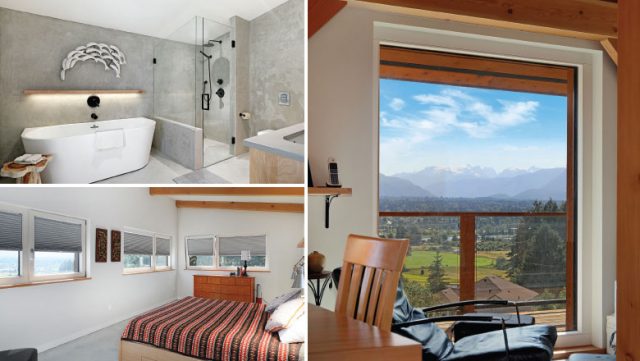