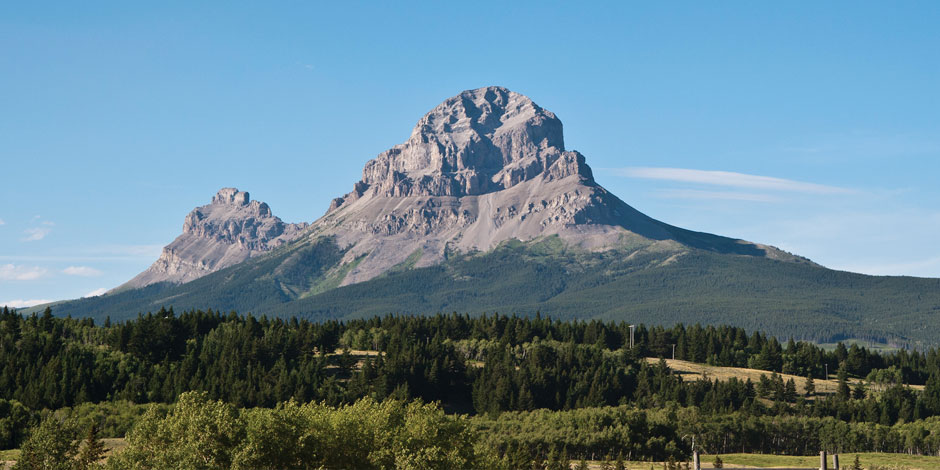 A team of Comox Valley runners road trips to the Alberta/BC border  to test themselves with the Sinister 7 Ultra Marathon.

In December 2016, discussions in my house revolved around setting goals to keep active. Friends had completed the BC Bike Race, The Cumby 50, and the Singletrack 6 recently, so races were on our minds. I’d held back from competing in running or bike races, feeling I wasn’t in the league to compete. My husband, Mike, reminisced about his cross-country running days, and competing in and organizing adventure races. He described an environment that supported anyone who entered, a community experience rather than the high-pressure races I’d imagined and secretly feared.

We looked up one of his former partners in Full Moon Adventure Races, Brian Gallant. Brian has taken the Canadian Ultra world by storm with his company Sinister Sports, including the Sinister 7 Ultra Marathon in the Crowsnest Pass. Mike always wanted to do this race. We realized registration for Sinister’s 2017 10th Anniversary Race was the very next day. It was the perfect opportunity.

The months leading up to the race were full of running sessions and training plan discussions. The excitement grew each week. Our team was made up of Jason Stevens, Paul Purin, Lisa Ludwig, Mike Leblanc and me from Cumberland, and Jen Winter from Comox—the CVC Collective Team! Done Creative made team shirts, hats were created by Sew What I Sew, and Frontrunners supported us with discounts on running essentials. The support was amazing.

Jen and Lisa were injured within weeks of race day. The call went out and within hours we had two eager replacements—Malaika Ulmi, who had run the Sinister before, and Roanne English, who would be in the Crowsnest area prepping for the Trans Rockies Enduro Mountain Bike Race taking place in Fernie two days after the Sinister. What’s a 14k trail run in the mountains before a seven-day endurance race? A good warm up, according to Roanne!

We made our way to Alberta to arrive at a campsite reminiscent of a music festival, complete with tents, trailers, and porta-potties. Families and support crews were setting up tarps, lawn furniture, and banners. This campground was silent by 10pm. A good rest will make or break the race, which started at 7am sharp.

Malaika was our starter and finisher, taking two of the seven race legs. She rose early in preparation. The rest of the team slowly rolled out of bed to join the masses making their way to the starting line, full of coffee and nervous jitters. I’d meticulously mapped out the estimated race times of each leg, the distance to the transition points, and shuttle details. Shortly after the race gun went off and the runners departed through town, I rushed Jason and Roanne to the car. We had one hour to get to the first transition point where she would take over.

As the day progressed, heat and elevation ramped up. Paul’s leg was a section called Satan’s Sack—aptly named, as he ran through a high-elevation burn area, exposed to midday heat. He recalls laying down on the trail more than once to be sick, but finished despite setbacks and immediately went to the glacier-fed river to cool off. Jason also struggled, but maintains it was one of his most enjoyable running experiences, with amazing views and supportive fellow racers. No egos, just good people.

My leg was next. I packed my headlamp, hoping to keep the light for the majority of the 28k ahead. I’d studied the elevation and trained on the Cumberland hills, but my nerves still kicked in. As people came through the transition, others looked out for Jason. They called out our number and I was up. After 10 minutes I started to ease into a natural pace and my nerves settled as I climbed into forest and mountains. I took pictures of the view to remember the sunset glow on the peaks through my runner’s haze. The forest grew dark and runners’ headlamps started to pop up around me like fireflies in the distance—a comforting sight in the dark. Spectators voiced their support, and small encouragements were exchanged between runners on the trail. We were all in this together, keeping our bodies and minds moving as the hills and distance added up.

At 11pm and 27k into my leg, the transition neared. Out of the night I heard music and saw lights leading me to where Mike was waiting. I give him the timer and a quick hug and he was off into the darkness. His leg is the longest and most difficult. It’s done entirely by headlamp, up to the base of Crowsnest Mountain, into the alpine, and through scree fields. It was a blanket of stars and the moon was so bright in the open alpine that he didn’t need the headlamp to run on the narrow trail after all. I woke to my phone ringing and Mike frantically asking where the next person was—Malaika had not made the transition.In the end, Mike waited 10 minutes before the team arrived to take on the final leg. He had beat the estimated race time by over an hour!

Malaika was strong and fast. Adrenaline mixed with a downhill slope to the finish allowed her to make up time lost in the transition error. Afterward, the team came together to celebrate our achievements. We committed to racing together in 2018, inspiring others to join. This summer, 12 racers are headed to Kimberly for the Black Spur Ultra to tackle the 54k and 108k races. The CV Collective team’s efforts at the Sinister 7 added up to so much more than individual fitness goals; we were role models to the kids tagging along with their parents, and friendships were forged through sweat and sore muscles, sharing the common experience of racing as a team.