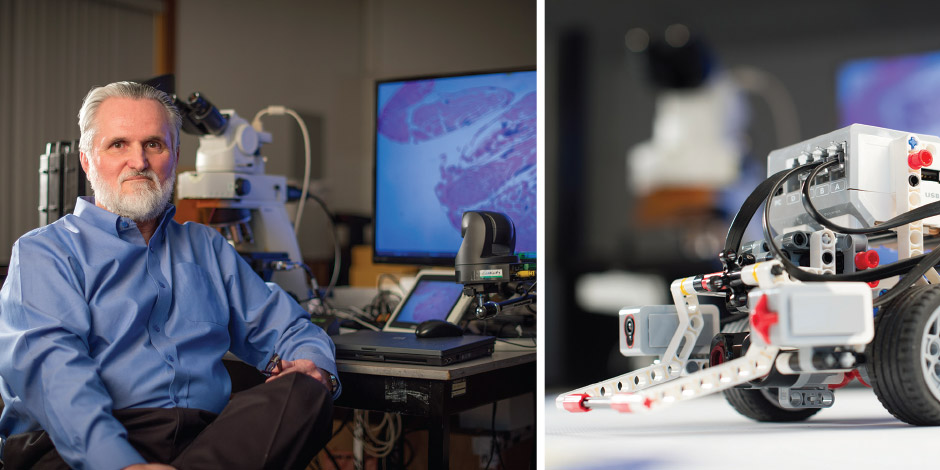 Reaching Out With Robotics

From a converted classroom on the second floor of NIC’s Discovery Hall, Albert Balbon is changing the way students learn science and technology, one robot and one microscope at a time.

No longer confined by the classroom walls, Balbon’s Remote Web-Based Science Lab (RSWL) allows students from across the globe to communicate with each other from their microbiology lab. Two students are in Alaska, the other is in Istanbul. Together, they control and collect data from a high calibre microscope that moves through cyberspace to remotely shift slides in the Comox Valley.

Balbon monitors the conversation but he’s already working on a second project, using the same technology. This one, is designed to allow all grade school kids in the Comox Valley access to Lego robotics online all year long.

Two years ago, Albert Balbon’s son came home from his Grade 5 class excited about being able to experiment with a Lego robotic kit that would be at his school for about three weeks.

“It was all he could talk about,” he says, recalling when Chase first came home after using the Lego EV3 robotics. “His eyes lit up when he talked about it and then it was gone. He knew I was developing online access to microscopes and science labs at NIC and he asked me if I could find a way to connect students to Lego robots online.”

Balbon reached out to Stewart Savard, the robotics instructor at the Comox Valley School District’s North Island Distance Education School (NIDES) and together they found a way to combine Lego robotics with technology in the RWSL. Under the agreement, teams of students at home or in class will be able to program and operate Lego EV3 robots at NIC over the internet.

In 2002, Albert and Ron Evans created a way for astronomy students to explore the universe from home using a remote telescope. That technology paved the way for development of the RWSL in 2004.

Students now view, interact, control and collect real data from a growing list of microscopes and scientific equipment from home–a far cry from the lab kits once shipped to students in remote communities. Instead of students completing labs in isolation or moving to urban centres to complete their degree, the RWSL has opened up science education to any college student with an internet connection.

The technology is already moving well beyond the Comox Valley. Since the lab’s inception, Balbon has presented the technology to the White House and the Association of Canadian Community Colleges, shared programming with the European Space Agency and NASA, and received funding from the Bill and Melinda Gates Foundation and the U.S. Department of Labor.

In 2015, the RWSL earned second place at the Wharton School of Business’ international Reimagine Education Awards, which identify the most innovative approaches in higher education.

But Balbon isn’t done yet. His focus, as always, is on where the technology can go next. “I told my son the career he wants hasn’t been invented yet,” he says. “For me, it’s about being open to new ideas and where they take you.”