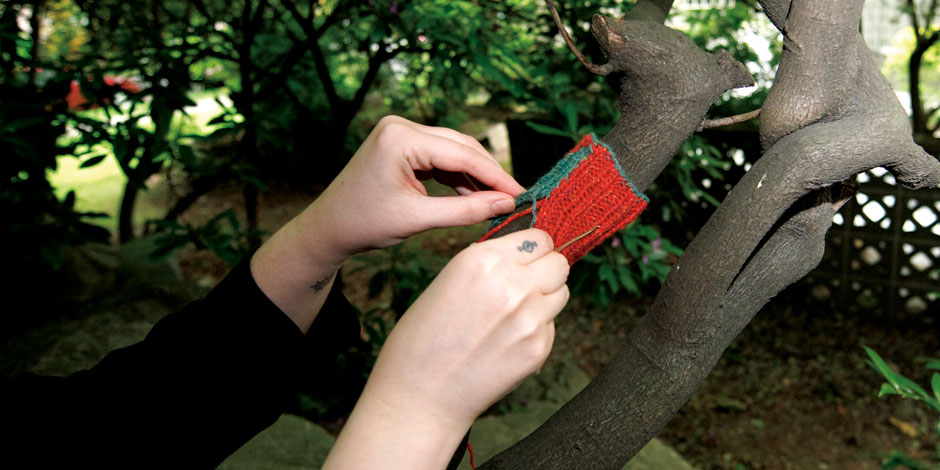 Yarn bombing, the spontaneous act of applying textiles in public spaces, liberates both artist and observer from expectation.

What is yarn bombing? Some people call it art. Others call it craft. Some call it a nuisance and a waste of materials. Others see it as something ephemeral that creates joy.

Yarn bombing is the act of creating graffiti out of yarn. A simple yarn bomb might be a piece of crochet or knitting wrapped around a pole. More elaborate works have taken the form of airplane cozies, tree sweaters, crochet-covered bicycles, clothed statues, and wooly telephone booths.

Yarn bombing was started in 2005 by Magda Sayeg, a knitter living in Austin, Texas, who decided to wrap a stop sign pole in her neighbourhood with a knitting project that she was frustrated with. Her wooly creation literally stopped traffic, and from then on, she formed a band of yarn bombers who left their creations in cities across the world. Early practitioners went “incogknito”—covering their faces in knitted disguises and putting up their creations under the cover of night. At first, yarn bombing was very much seen as a practice of street art, and artists were concerned about the illegal implications of their work. To these early artists’ relief, yarn bombing was embraced, and many of their creations had long lifespans, remaining in public for years. While some yarn bombers still take precautions not to be seen, a great many yarn bombers happily reveal their identities.

Since its conception, yarn bombing has become a global movement that has been embraced by crafters all over the world, and they’ve used their hooks and needles to cover bridges, statues, sign poles, cars, and all other aspects of the urban and rural environment in stitches. From a crochet-covered rock left in a Scottish farmer’s field to a garland of knitted hearts in front of Courtenay’s library, yarn bombing appears in the most unexpected places.

No matter what form a yarn bomb may take and how the act may occur, when handcrafts are placed in the public environment, people react to them. One of my first yarn bombs was in front of the Parliament Buildings in Victoria, and not a single passerby noticed what I was doing—until one woman came up to touch it. I was nervous at first, until she told me that she was a knitter and she wanted to know what kind of wool I was using.

For over a decade, I’ve witnessed how yarn bombing resonates with those who make it and those who discover it in public. It has become a catalyst for conversation around many topics, including the built environment, the purpose of art and craft, the juxtaposition of a “feminine medium” in a traditionally masculine context, and the societal assumptions around the value of women’s work and time. Not all knitting or crochet needs to become clothing. Those who handcraft have the right to pursue their leisure activities with the same freedom as those who watch sports.

Street art is often seen as something that damages communities, and yarn bombing turns this idea around—what if graffiti, a universally accessible art form, is something that can bring communities together? While yarn bombing poses a soft and fuzzy entry point into this idea, it also ignites conversations around how art, when removed from galleries, has the ability to communicate in the public realm.

Yarn bombing is an act of giving yourself and your art over to impermanence, and there’s magic in making something by hand that doesn’t have a predictable lifespan. While craft is a slow process, there’s no guarantee of how long a yarn bomb will last in public. Just like a master of Zen water painting, the yarn bomber must focus on the process of making the work, rather than the outcome. Above all, “yarnarchy” is about challenging the status quo and running wild with your ideas and your stitches. 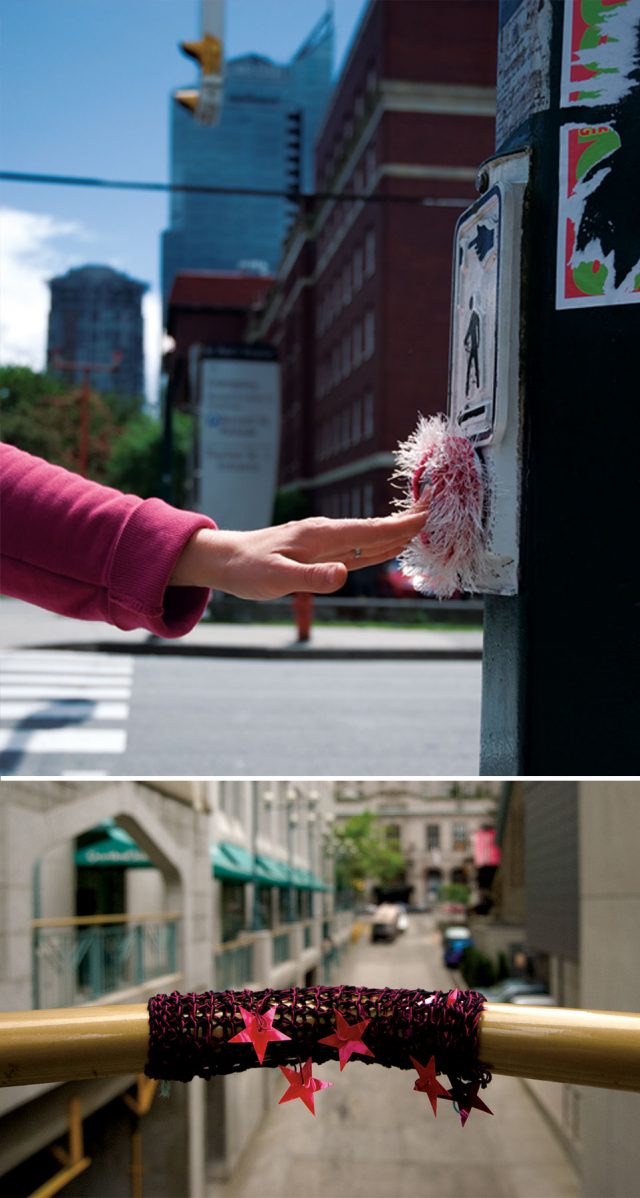