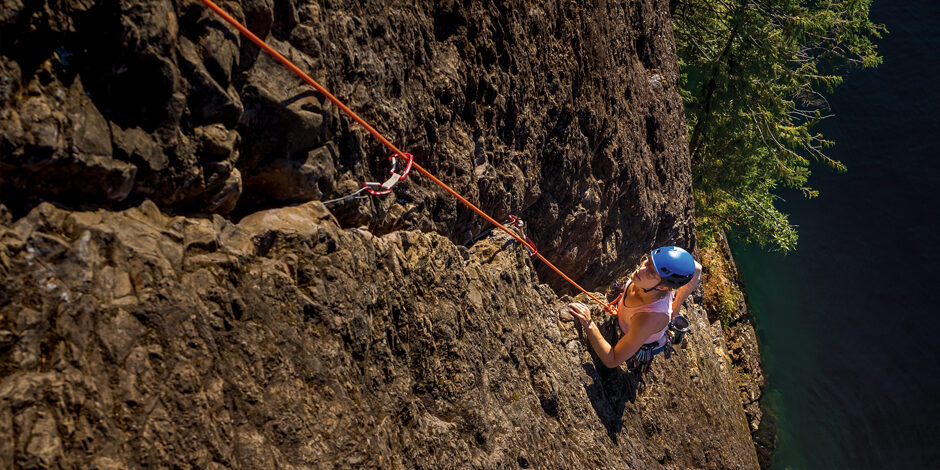 For climbers, the attraction of Comox Lake has always been the cliffs.

Watching John Waters scramble up a rock face is like watching a monkey climb a tree. A moment ago, he stepped off the ledge at the bottom of Devil’s Ladder, a climbing area on the shore of Comox Lake, and ambled up the nearly vertical rock wall with a nonchalance that suggests he’s spent most of his life off the ground.

Now he’s standing on two quarter-sized nubbins, holding on with one hand, and telling me, with the help of his free arm, about how he and his twin brother Mike first climbed this particular pitch via a canoe they paddled with two-by-fours. Or it could’ve been about how road builders blew up the first climbing spot in the valley.

I don’t remember, exactly, because all I’m thinking—as he

stands in that delicate position for several minutes—is “Don’t

fall, don’t fall, don’t fall.” But then I realize Waters knows this climb, and pretty much every other route in the Comox Valley, better than anyone else. He’s largely responsible for nurturing the sport here.

“Mike and I were always into exploring around,” Waters says. “I think maybe it’s a twin thing: there was no one to tell you it was a bad idea.”

John and Mike discovered climbing in Grade 10. It appealed to their love of adrenaline, exploration, high places, and lack of rules.

They weren’t the first to climb here—someone else established the routes along the Comox Logging Road where the brothers made their first ascents—but they were probably the first to climb at Comox Lake. As kids, they’d hiked from the Comox Lake Park Campground, near Cumberland, to Devil’s Ladder. Back then, it was to jump off the cliffs. In 1991, they returned with makeshift climbing gear they’d cobbled together from their dad’s commercial fishing equipment and scrambled up a crooked crack in hiking boots. They called the route Bitter Berry.

Thoroughly hooked, they ordered real climbing gear. At first, they focused on climbs with cracks, which allowed them to wedge equipment in the grooves and clip it to a rope with carabiners. That eventually led John to belaying Mike from a canoe up Humping Newt, the climb we’re on now.

Around the same time, they started exploring the cliffs hidden in the forest above the campground. John scrubbed the moss off one area and found a promising-looking face, but there wasn’t a crack to place protection in. Undaunted, he taught himself how to drill, screw, and glue metal bolts to the wall.

“We never let lack of equipment or inexperience hold us back,” he says.

The climb, which he called Complex Thoughts, remains one of the best at Comox Lake.

Back then, the Waters knew every other climber. A tight-knit crew—mostly the twins, Mike Boyd, Nathan Macham, Aaron Hamilton, Carman Gibson, and Rick Fischer—put in countless hours wandering the hillside, scrubbing the rock, developing promising routes, and trail building. Many others have joined the effort in recent years.

“The climbing community is amazing,” says Tara Langlois, a climber who moved here from the Canmore area. “They’re really friendly and welcoming and volunteer a lot of time.”

“You don’t build a climb just so you can climb it,” Waters explains. “I like the idea of being a part of history or building something. It’s why I wrote the guidebook.”

His book, Comox Valley Climbs, is now in its third edition and includes more than 150 routes. It’s not just Comox Lake: there’s a small climbing area off the parkway to Mount Washington, ice climbs on Mount Becher and the backside of Mount Washington, and the newest area, Constitution Hill near Wolf Lake. Each offers something different. But Comox Lake remains the focus, even if most of the people using the boat launch and beach don’t know the cliffs exist, just a few minutes’ walk uphill.

“It’s the best-kept secret,” says Langlois. “I’m shocked by how few people are in the forest climbing [considering] the number of cars in the parking lot.”

That’s not to say the climbing hasn’t gotten busier. The sport is growing everywhere, driven by Oscar-winning documentaries, inclusion in this year’s Tokyo Olympics, and, especially, the increasing number of indoor climbing facilities. Courtenay’s WIP Climbing, which opened in 2019, has injected a lot of local interest into the sport and now offers year-round indoor climbing. So does the wall in the Cumberland Recreation Centre, which predates any outdoor climbing at Comox Lake.

Waters welcomes the newcomers, though he does lament that Comox Lake is not particularly beginner friendly.

“I do wish there were more easy climbs,” he says. “But I can’t change the rock.”

And he wouldn’t really want to even if he could. As he scampers higher and higher on Humping Newt, I think he looks more comfortable up there than on the hiking trail we walked to get here. It’s obvious that, for John Waters, this is home. 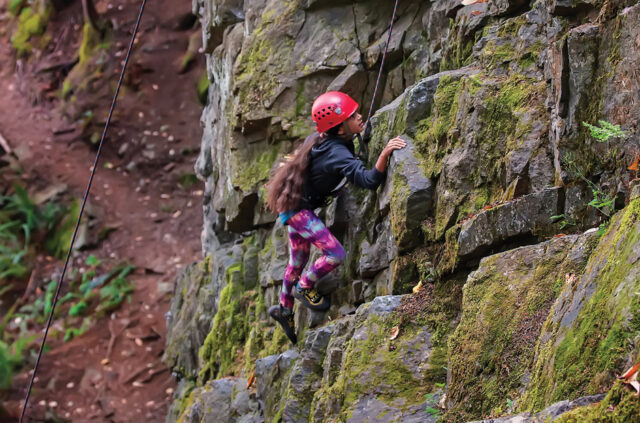