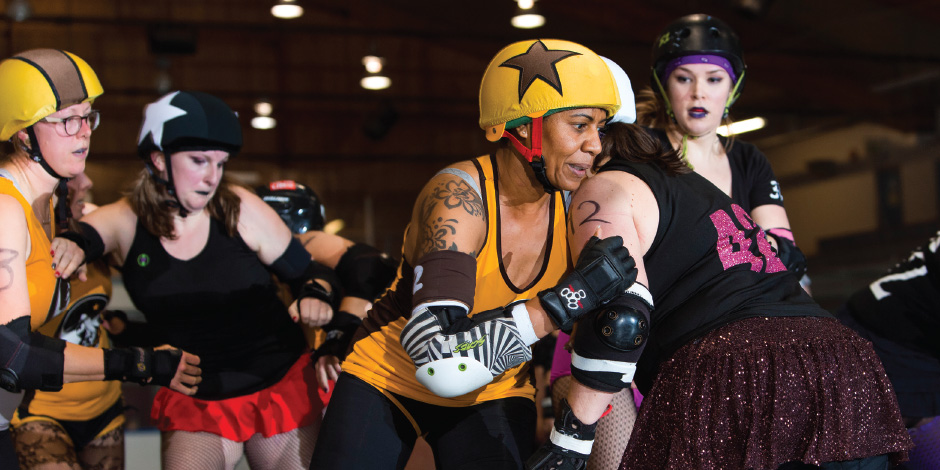 How they roll: A crash course in roller derby

Over the years, I’ve quietly contemplated whether I have the skills—and the lady balls—to try roller derby. It’s a fascinating sport. When the opportunity to write about derby fell into my inbox, I didn’t hesitate when it came time to lace up with members of The Comox Valley’s very own Brick House Betties.

Beyond the fishnet stockings, the sassy nicknames, and the aggression the sport is known for, it requires a heavy dose of strategic thinking and some superior skating skills—as I quickly found out not having been on roller skates for a few decades!

In a nutshell, roller derby involves two competing teams of women (and men!) skating around an oval track with the intent of lapping as many skaters on the opposing team as possible. Five members of each team skate for two 30-minute periods, made up of two-minute jams.

The Pivot and the Blockers from both teams skate in a single pack. The Jammers skate as quickly as possible, muscling their way through the pack to score points. Each time the Jammer passes a member of the other team, they score one point for their own team. Blockers are focused on stopping the opposing Jammer from passing. Blocking can be done with a player’s hips, rear, and shoulders, but they end up in the penalty box for things like tripping, using an elbow, charging from behind, and blocking above the shoulders.

It’s safe to say that roller derby is quite the hard-hitting phenomenon. According to the Women’s Flat Track Derby Association (WFTDA), there are over 450 leagues worldwide. In Canada, there are at least 80 sponsored roller derby leagues.

Modern derby started in Texas in the early 2000s, but it has a storied history that dates back to the 1930s with the Transcontinental Roller Derby. It involved co-ed pairs of skaters attempting to be the first team to skate 4000 miles, and quickly evolved to include a slanted track for speed and points for passing other skaters. Contact between skaters was illegal until 1937 when refs were instructed to stop penalizing hitting and pushing to see what would happen.

While derby is a competitive contact sport, there’s a strong core that fosters sisterhood and celebrates women’s strengths and abilities both on and off the track. It’s a sport that encourages body positivity and welcomes anyone to give it a go. I did just that.

I was lucky to spend some time skating with The Betties during their off-season. It was an awesome experience from the moment I slipped on the protective gear and pulled the laces of those quad skates tight, to eventually conquering a few cross overs and taking some gentle hits.

As I made my way through some basic skating skills sporting my mouth guard and tall socks, I couldn’t help but feel a little bit like a badass. Then I fell. I fell a few times, but I’d learned to take a fall and to trust my gear. Turns out, those elbow and knee pads really do come in handy! Now, if only I’d added a little more padding to my rear!

The Brick House Betties have worked hard to build a friendly, competitive team with integrity. The derbyers that I had the pleasure to skate with are intelligent, strong, and unique. They are a fun and funky group of women of all ages, shapes, sizes, and careers. Some with kids, some without. The beauty of derby is the diversity and the acceptance that comes with it.

Curious?! Go check out their family-friendly events during the next season. These ladies do the hustle on wheels! Better yet, go skate with The Betties! Their “Fresh Meat” intake starts in September. I skated through the first two weeks and plan on going back for the full meal deal. All you need is a mouth guard, a water bottle, your healthcare card, some determination, and a positive attitude. Sessions take place at the Cumberland Recreational Institute (CRI), so you’ll also need the drop-in fee.

Vancouver Island roller derby teams can also be found in Campbell River, Cowichan Valley, Powell River, Nanaimo, Salt Spring Island, and Victoria. The Comox Valley also has a junior team for skaters aged 7 to 17 called the Stone Cold Stellas, who are trained, coached, and mentored by The Betties. 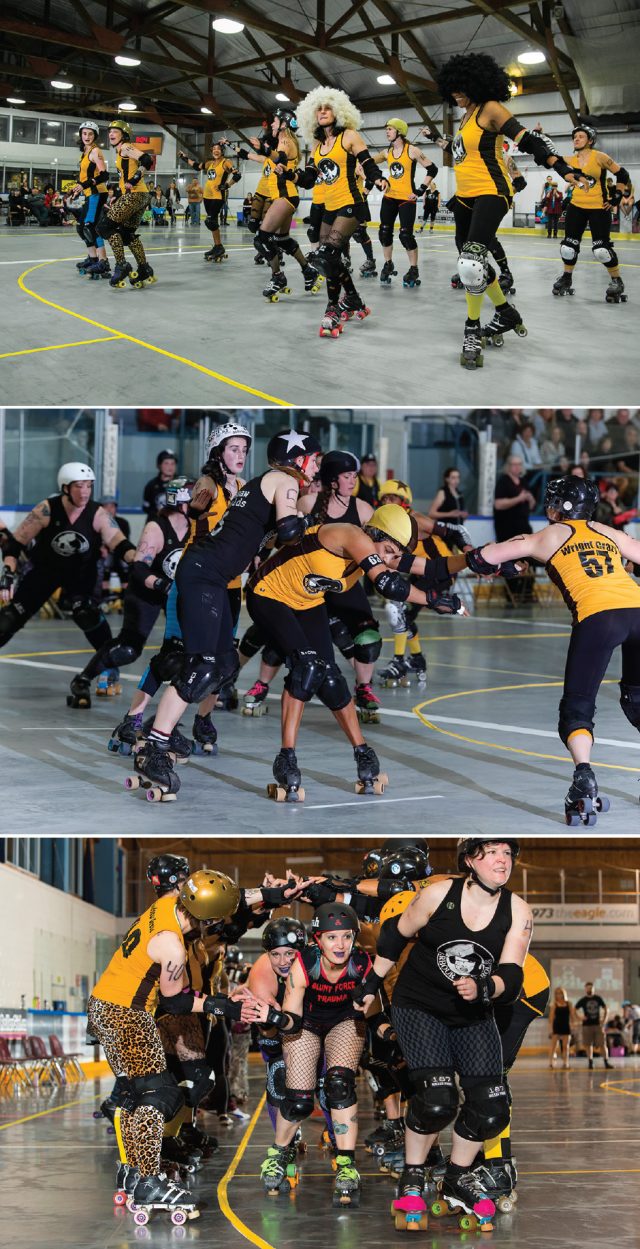