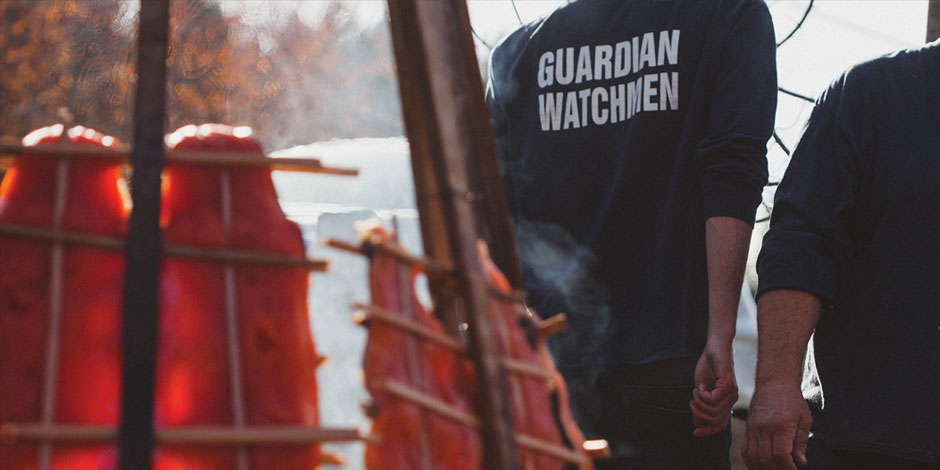 The K’ómoks First Nation Guardian Watchmen use the bounty of the sea to help protect the forest.

The late autumn sun lazily streams through dwindling golden leaves. Live music drifts across the smiling, murmuring crowd. Laughing children roam freely, getting their faces painted and collecting treasures. A large metal tray full of cooked salmon rests on a table while hungry racers and revellers hover nearby to catch the smell.

There is a respectful curiosity as a cultural tradition that goes back millennia mixes with one that’s relatively new. Since 2004, the Perseverance Trail Run has been an important fundraising event for the purchase and protection of land by the Cumberland Community Forest Society (CCFS). More than that, it has become a cherished community tradition of coming together for the forest. Snaking through trails near Perseverance Creek, the family-friendly run weaves in and out of a 93-hectare parcel that is the CCFS’s next land-acquisition target.

This year, the K’ómoks First Nation (KFN) Guardian Watchmen are hosting a traditional salmon barbecue to contribute to the cause of conserving this critical river corridor connecting Allan Lake and Comox Lake.

Big pieces of bright red coho salmon, splayed and carefully attached to four red cedar stakes, are already sizzling over the open fire. People pause to watch careful, deliberate hands preparing the next piece of janu—a word for salmon in one of the several K’ómoks dialects.

Randy Frank and Caelan McLean, both members of the KFN Guardian Watchmen, lay a long, custom carved cedar stake out on the table. Caelan slices open another package of fresh salmon caught nearby, within K’ómoks traditional territory, and slides the fish between the prongs of the stake. A long piece of split cedar is selected from a pile, and carefully measured pieces are broken off and slipped over and under the fish to cradle it. More sticks are woven perpendicular to sandwich the salmon flat and secure it in place. The stake, which has been soaked for hours so it won’t burn, is secured shut and angled with skin facing the fire beside the others. When the skin crisps up and white blobs of fat start showing up on the open side, it’s time to flip it for the finishing touch.

The K’ómoks traditional territory extends 200 km from the Englishman River in the south to the Salmon River in the north, and Perseverance Creek lies right in the centre of the Nation’s southern territories. Cory Frank, manager of the KFN Guardian Watchmen Department, explains: “Our role is to be stewards of the land and sea from the top of the mountains to the ocean. We are protectors of everything in that area.” Building community connections has been integral to his team’s growing success as a respected partner in local ecology and conservation projects across their traditional territory.

The Department’s projects are diverse, ranging from grizzly bear monitoring to cultural site inventories to eelgrass habitat mapping and restoration. Under Cory’s leadership, and with strong linkages to other First Nations members of the Ha-ma-yas Stewardship Network on Vancouver Island, the Department’s services are increasingly sought after.

Salmon barbecues are a way of life for the K’ómoks people—simply the way they have cooked their food for generations. While Cory has hosted feasts at community events over the years, hosting traditional salmon barbecues as a contribution to local conservation groups’ fundraising events is a relatively new collaboration effort for the KFN Guardian Watchmen team. The team recognizes an important opportunity for building cultural awareness and collaborating towards shared goals, and they hope to continue this work.

When the final stakes are leaning over the fire, Randy and Caelan lean casually on the fence to relax and take in the scene, the music, the vibe, the air of accomplishment. The sense of community is strong. If reconciliation means coming together, building common ground and a better understanding, our community may have just taken one small step forward.