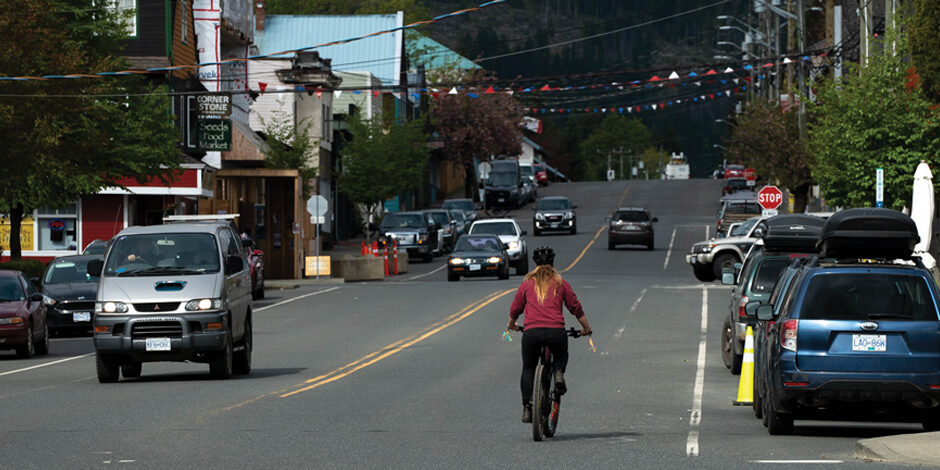 Managing gentrification to protect the communities we love.

We’ve all done it. Bragged about how we used to go somewhere when it was still cool and undiscovered, before the masses came. “Remember when Canmore was cheaper than Banff, when Cumberland was punk rock, when you could drive on Long Beach?”

We visit places, fall in love, move in, and change them forever. It’s called amenity migration, and gentrification is a symptom.

Many mountain towns experienced amenity migration in a big way in the 2000s. As remote work became possible, people flooded out of cities in search of a better life—to live rural, find cheaper housing, ski and mountain bike. In each community, this migration brought changes to the social fabric, impacts on the local economies (both positive and negative), and, eventually, rising house prices.

Vancouver Island towns have a lot in common with mountain towns: they were built on resource extraction. When the industries shut down, they were down and out, searching for opportunity. These towns had character and grit, and they attracted artists. They were affordable and they were surrounded by nature. They let people be themselves. They were magic, they were lovely, they were funky. But they had to diversify their economies.

Gentrification is defined as the process of affluent people moving into poorer areas and bringing with them both businesses—like great restaurants, coffee shops, and breweries—and higher housing prices that eventually drive poorer residents out. Although this phenomenon has been more widely documented in America, where it disproportionately affects people of colour, amenity migration exists in small-town British Columbia.

A tourism theory called Doxey’s irritation index (Irridex) describes residents’ attitudes towards tourism as a destination evolves. At first, there’s a sense of euphoria and giddiness. The new industry may be seen as a saviour. It’s like a first date—there’s lots of flirting. People are just starting to visit your town and spend money. They like you!

Over time, the industry starts becoming more familiar and routine. The novelty has worn off and you’re becoming codependent. It’s a mutually beneficial relationship that pays the bills, and that’s good, because after the mill/mine/fishery/forestry industry shuts down, things get tough.

Then, tourism is thriving and, suddenly, it’s too much. Things start feeling a little out of control. The romance has soured. An increasing number of visitors decide to stay—or worse, they buy a home and turn it into a vacation rental. You’re shocked and saddened by your friends and family being displaced by the wave of amenity migrants.

Statistics Canada reports that 6,000 people moved to the Comox Valley between 2016 and 2021. That’s an 8.9 per cent population increase in just five years. And what did that do to housing prices? It sent them through the roof—they rose 26 per cent just last year, according to the Vancouver Island Real Estate Board. Yet income levels have been stagnant for years, and recent inflation has made life more unaffordable for most.

It’s not all bad. If a community is in control of growth and development, and residents see a clear benefit and an improvement in their quality of life, that’s success. (Who doesn’t like great coffee and beer? And I just heard Campbell River is getting a croissant shop!) New money brings tax revenue, which communities desperately need to upgrade aging infrastructure and to support public amenities such as parks and cultural facilities.

But all too often, residents feel that change is mowing them over, degrading their way of life. What happened to that affordable diner you used to go to, or the hardware store just down the street that was small but handy? They made way for another bike shop.

Things become out of balance. “Carrying capacity” is typically a measure associated with biology—how much of one species can a particular environment support? A community’s carrying capacity is more than physical and environmental, it’s emotional and social. Salt Spring Island just reported numerous businesses reducing hours or closing because of the severe labour shortage sparked by the housing crisis. How ironic: Salt Spring is now made up of millionaires with nothing to do.

A family friend named Sheila has lived in rent-controlled non-market housing in Soho for 50 years. She’s an actor, a painter, a gardener (on the roof), and a florist. Thanks to Soho Housing, she was able to raise a child solo, on an artist’s variable income, in one of the most expensive cities in the world. She has grown old in the neighbourhood where she belongs. Regardless of her socio-economic status, she is valued for her contributions to the fabric of the community.

We don’t seem to be able to do that in BC, though big cities try. Vancouver is making headway—it has the highest percentage of non-market housing in the province—but in small-town BC, people are getting ravaged by out-of-control housing prices. BC Housing has recently ramped up investment, but is playing catch-up.

The fact that you can be displaced from your community based on your income seems bizarre and cruel—but again, this country was built on displacing people. This happened to Indigenous people in a violent and tragic way long before it happened to uninvited settlers, so maybe we shouldn’t be surprised.

Change is inevitable and economic diversification is needed. So how do we prosper from growth AND protect what we love about our communities? One place to start is your local government. Get out and vote. Vote for people who aren’t afraid to work hard to understand the wicked problems we face and who can make tough decisions. Enable your community champions to inspire action—or become one yourself.

Get involved in your Official Community Plan (OCP)—creating it, monitoring its progress, protecting it or changing it. About once every decade, an OCP is created, with extensive citizen engagement, to guide a community’s future. It’s a powerful document that has huge impacts on decision making. Comox residents have this opportunity right now, as the town is planning to review its 2011 OCP very soon. If you live in Courtenay, get familiar with your brand-new OCP, hot off the press in March 2022. Cumberland last did an OCP in 2014, so its best-before date is looming.

There is strength in numbers. Bring together local businesses and the non-profit sector for collaborative community development. Foster a diversified resilient local economy and a vibrant arts scene. Start a regional housing association. This may sound boring to some, but it’s important. And if you own a rental unit, rent it long-term. Just ask Tofino about the impacts of vacation rentals.

Back to Soho. The fight to protect it and the diverse residents who live there is ongoing: now its famous music venues are under threat of being gobbled up by investors for redevelopment. The effort to balance the need for economic growth with protecting the soul of a place is perpetual.

As people move to the Comox Valley and wish the door could close behind them, communities need to decide how they want to grow, and, more importantly, what and who they want to protect. Communities have the power to control their own destiny, but it takes effort. The next generation deserves the right to grow and prosper in the communities they love.


Cleo Corbett, RPP, MCIP (she/her) has been a municipal planner for 20 years in amenity regions across BC. She is grateful, humbled, and honoured to be living, working, creating and playing on the traditional unceded territory of the Ligwilda’x _w People – Gilakas’la. 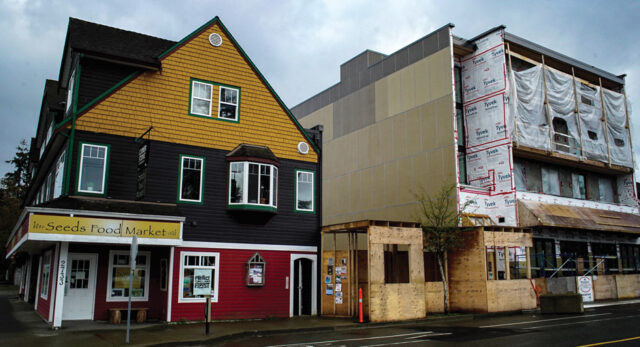